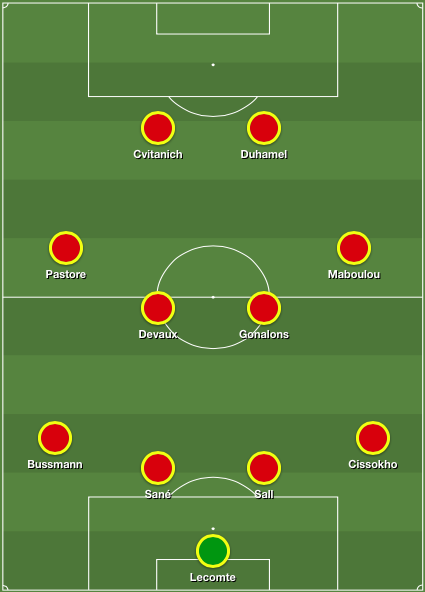 A new season brings difference. Get French Football News introduces a brand new feature called the Ligue 1 Team of the Week, with the capable Simon Scutt taking the reins of this new segment.

Lorient carried on their tradition of taking on one of the league’s big sides on the opening day. They went down to the principality to play Monaco, where, for the most part, goalkeeper Lecomte kept Monaco’s wealth of attackers at bay. He was only eventually being beaten by a Falcao penalty, that he came very close to palming away. This was Lorient’s first ever win at the Stade Louis II, and this great start to the season was in no small part down to their ‘keeper who has firmly showed his intent to hold onto the number one jersey.

Metz began life back in Ligue 1 with a tough trip to the Stade Pierre Mauroy to take on Lille; they can be delighted to have come away with a point, albeit a hard-fought point at that. Lille threw everything at Metz but the newly promoted side were able to hang on and take an important away draw. Bussmann shone throughout.

Wily Sagnol began his Ligue 1 adventure with Bordeaux at Montpellier on Saturday night. Things got off to the perfect start when Cheick Diabaté did what he does best and scored a poachers effort inside the first fifteen minutes. They were able to hold off any Montpellier advances largely thanks to solid defensive work and in particular an inspired performance from newly-appointed Bordelais captain Lamine Sané. He was especially strong in the air, dominating in his aerial duels.

With the departure of Kurt Zouma to Chelsea, you would have been forgiven for think that there is a fairly sizeable hole left in the Saint Étienne defence. However, it did not show when Sainté travelled up to Guingamp they left with a comfortable two-nil win and a clean sheet as well. The combination of Sall and Loic Perrin looks to be as solid as ever. They kept Guingamp at bay and even on the odd occasion the Breton attacker managed to get a shot on goal Stephane Ruffier was on form to make the save when called upon.

In the clash of the teams that are banned from signing players, it would be Nantes who claimed the victory, when the substitute Yacine Bammou made it a debut to remember around the hour mark. He opened his Ligue 1 account with his first touch. Issa Cissokho was one of the players to make a real difference down the right flank. Continuing on his impressive first season in Ligue 1 he was his usual bustling energetic self, forming a good partnership with Serge Gakpé down the right flank.

Welcoming the two-time champions and Parisian behemoth that is this current incarnation of PSG is a daunting start to the season for anyone; yet Reims handled the occasion well to claim a point. While they might have ridden their luck at times, their endeavour was well rewarded with their two goals and ultimately their point. Devaux gave his side the lead when he carried on his run to find himself in the perfect position to slot home.

The young generation coming through at Lyon saw off the newly reinforced Rennes side on Sunday afternoon at the Gerland. The midfield was dominated by Lyon captain Gonalons with tireless dynamism and a 97% pass completion statistic allowed Lyon to deal with the threat of Rennes. They got over the line thanks to goals from Steed Malbranque and Alexandre Lacazette.  While only 25 years of age, Gonalons is one the senior players in the Lyon ranks to whom people will look to for leadership.

Much like in previous seasons, PSG failed to win their opening game and were made to sweat before Zlatan beat the keeper a second time to secure a draw. Truth be told, the game should have been all over after 20 minutes. Pastore won the ball before delicately playing Zlatan in on goal, and Zlatan did what Zlatan does. A little while later, Pastore squares to ball the Swede with an empty goal at his mercy only for the post to intervene. Zlatan would prove his humanity again when his saw his, dubiously won, penalty saved. Lucas Moura would also fail to score when it looked all but certain he would find the net. Pastore added a second assist when eventually PSG equalised in a good performance from the much-maligned Argentine.

Two teams under new management kicked off their season on a balmy night in Corsica. Marcelo Bielsa’s Marseille travelled to the island to play Claude Makelele’s Bastia. The game was a suitably frenetic and a frantic affair with six goals, including an own goal and two penalties. The opening goal really was something special, a long-range thunderbolt from new-boy Maboulou. Arriving from Chateauroux in Ligue 2, his first shot in Ligue 1 led to an early contender for a goal of the season.  Maboulou’s evening would get better given that it was him who hit the equaliser after holding off the Marseille defenders to slot home.

Caen began their Ligue 1 campaign at Evian and romped home with a three-nil win. Their talismanic striker Duhamel was naturally the key man, netting a brace to give Caen a three nil half time lead. The first of which a close range tap-in showing his predatory instinct in front of goal. He would then find himself in acres of space to head home. Ligue 2’s top scorer last season continues his goal-scoring form into the new season. Caen will need Duhamel to be as prolific as last time out to avoid them carrying on their ‘yo-yo’ club history.

Nice welcomed Toulouse to the Allianz Riviera and an exciting end-to-end encounter took place. It was the Argentinian attacker Dario Cvitanich who made the telling difference. His two goals, one a stunning finish from outside the box the other a close range effort after some less than convincing defending, secured the three points for Les Aiglons. Nice dropped from fourth in 2012-13 all the way down to 17th the following year. His goals were his first in the league since mid January and Nice will be hoping Cvitanich recaptures some of his old form to ensure a more fruitful season.

AS Monaco have offer rejected for Antonio Rüdiger