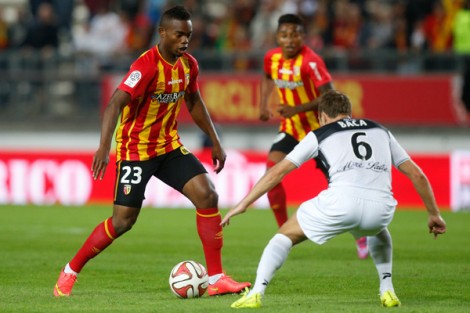 It is Ligue 1 Team of the Week time as Simon Scutt looks back on the fourth week of action.

With his team mates taking care of business at the other end of the pitch it is easy right off the role played by Sirigu in his side’s 5-0 win. But given how PSG got their first goal shows the value of a goalkeeper keeping his head. Also Sirigu pulled off a fantastic save from a bullet strike from Melvut Erdinc at point blank range.

Luck can be vitally important in football and Bordeaux seem to be one of the lucky ones at the start of this season. By rights Bordeaux should have been reduced to ten men and facing a penalty when already one down to Bastia. In fact, straight after they went and equalised to secure the draw. It was Mariano’s enterprise on the right flank that provided the assist for Rolan’s goal.

Saturday night saw Nantes’ second home win by a  1-0 margin of the season. Nantes dominated for much of the game but seemed unable to find the net; as is often the case with this Nantes side. But they did eventually score and thus take all the points. Nantes are typically strong defensively and the star-man Djilobodji is key to the Nantes defence remaining as solid.

One of Ligue 1’s most tactically impressive sides, Toulouse saw off Evian by the slenderest of margins with their 1-0 win. The Toulouse defence was without a number of players for a variety of reasons. The game was full of chances for both sides.  It was Adrien Reggattin’s superb free-kick that secured the win.

Making his first start of the season Maxwell displaced Lucas Digne from the left back slot at the Parc des Princes. He served his team with two assists as PSG demolished Saint-Etienne. Thus helping his team to return to winning way following the disappointing draw at Evian the previous week.

Things can change very quickly in football and in the space of four second half minutes Metz went from a home defeat to taking three points at home to Lyon. It was Lejeune who provided the pass for Falcon to head home. A fantastic performance from the newly promoted side and things go from bad to worse for Lyon following their elimination in Europe.

Now, it is not often that substitutes make team of the week but one may have to make a exception for a player who comes on to score twice and set up the third. Lavigne who was Lorient’s hero at Monaco on match-day one helped his team see off the challenge of their Breton neighbours with this thumping 4-0 win.

Marseille’s comprehensive win over Nice was largely thanks to the two goals scored by the former Lille man Payet. The first showing good control and quick reactions to steer the ball home after a rebound in the box. The second a diving header to see the ball fly passed the Nice goalkeeper. Payet has been afforded more freedom by Bielsa and looks to be enjoying his new role.

Given the freer role given to Dmitri Payet it has been Gianelli Imbula that is picking up the slack in the middle of the park. Given Marseille’s tactical shift they need to be tight in these areas as they do look impressive going forward but susceptible at the back. Imbula was fantastic in the midfield with his bustling industry to the fore as his team won comprehensively against rivals Nice.

Another of the promoted sides continue to upset the odds as Lens saw off Reims 4-2 in an eventful game in Amiens. It was the young Cyprien who gave his side a way back into the match after the early Reims goal. A thunderbolt strike from the edge of the box was the goal of the game from the Lens academy graduate.

In what supposed to be a close encounter between two of the top teams in Ligue 1 PSG humiliated Saint Etienne to tune of a 5-0 thrashing. The Swede scoring a hat-trick on his return from injury to confirm his place as Ligue 1’s main man. His first a bullet of a header before seizing on a poor back-pass for his second before rounding it off with a comfortable one on one finish for his third.  Safe to say that both PSG and Zlatan are very much back.

Vadim Vasilyev: “We are ambitious”