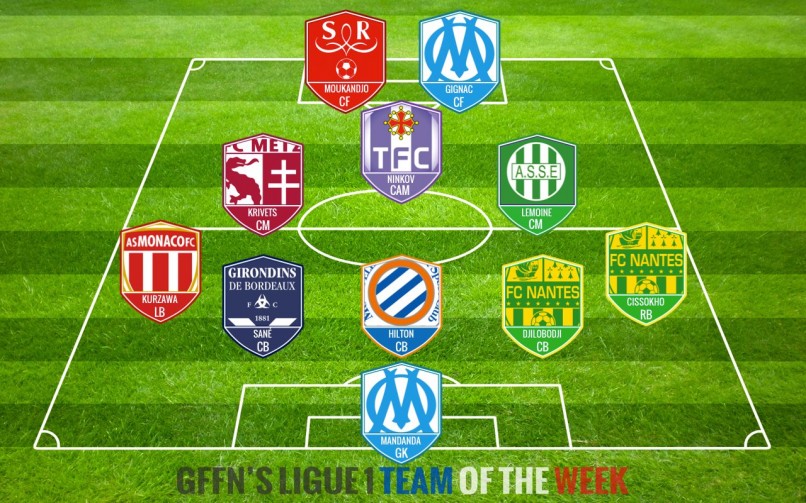 Another weekend of Ligue 1 action and another Ligue 1 Team of the Week. Simon Scutt takes you through it:

Much has been written about Bielsa’s arrival at Marseille and the consequences thereof. One thing that is certain is the responsibility on the defensive unit. They played well on Saturday afternoon in the sun at the Velodrome as they had to keep out a fair few Rennes chances before the attacking unit killed the game off in the second half.

Two teams returning from European action on Sunday afternoon in Monaco when they welcomed Guingamp to the principality. Continuing his impressive start to the season, Layvin Kurzawa was again excellent against the Breton side. A constant menace down the left flank, his crossing a threat whilst he was usual effervescent self on the ball down the wing. A first win of the season came from a defensive mistake after a free kick allowed Monaco to chalk up their first home win of the season.

Montpellier went up to Lille looking to really kick-start their season and they were faced with a much changed Lille side after their Europa League exploits on Thursday night. The Montpellier side had to deal with a young and lively attack and they did well to keep them out for 90 minutes.

Bordeaux kicked things off in Ligue 1 on Friday night with a 2-1 win over Evian. Their performance was efficient and proved just why they are riding high in the table under their new manager Willy Sagnol. They currently sit joint top of the table after their record of four wins 1 draw and 1 defeat.

A towering presence in a very solid Nantes defence Djilobodji was at his best again on Saturday night at home to Nice.  It was his physicality that gave Nantes the early lead at the Beaujoire when his goal-bound header was deflected into the net by a Jordan Amavi the Nice defender. The Nantes defence kept at bay any Nice advances in a nervy last twenty to ensure a good victory for the home side.

Nantes returned to winning ways after the three minutes that cost them the game at Lille last time out. There was an improvement in technicality from Nantes who looked better on the ball than previously. They created a lot of chances in front of goal there was just a little bit lacking in terms of finishing. The defensive base that Nantes is strength and is quite formidable thanks to the combination of players in the side. Cissokho brings pace and energy down his side, his link-up with Serge Gakpé ahead of him is particularly impressive.

A difficult week of travelling for Saint Etienne finished with a hard fought win in Amiens against Lens. Les Verts returned from Azerbaijan to go straight into a tricky looking match with Lens but they were able to do what was needed thanks to a late goal from captain Lemoine. An entertaining match that saw Saint-Etienne put under serious pressure to begin with before coming into the match just when was needed.

Metz maintained their steady start to the season; they sit ninth at the moment, with a comfortable home win against Bastia. Much was made of the return to Ligue 1 of Florent Malouda but it was another Metz midfielder who stole the show. Sergei Krivets arrived from BATE Borisov this summer was the author of a goal and an assist for his new side in a good attacking performance from the northern side.

A quite astonishing final quarter of an hour meant that both sides shared the points in Toulouse on Saturday night. On 76 minutes it was one each before both sides went mad and scored four goals between them to finish up three apiece. Ninkov was the man to level things up once and for all with his chipped finish on 87 minutes. He also was responsible for provoking Toulouse’s second penalty of the evening, which resulted in the second of their three equalisers.

One player who is certainly enjoying the Bielsa reign at Marseille is Andre-Pierre Gignac who now has six goals in as many games for OM. He was at it again against Rennes scoring twice in quick succession in the second half to seal the win. That is now four wins in a row for Marseille who, without any European competitions, could make a sustained run for the podium and the Champions League places.

Reims secured an impressive away win at Lorient this weekend thanks to a poacher’s finish from Benjamin Moukandjo, he turned home Odair Fortes’ cross in the 72nd minute. This marks a second consecutive victory for Reims with a clean sheet to boot. Lorient meanwhile failed to score for the fourth game out of five.