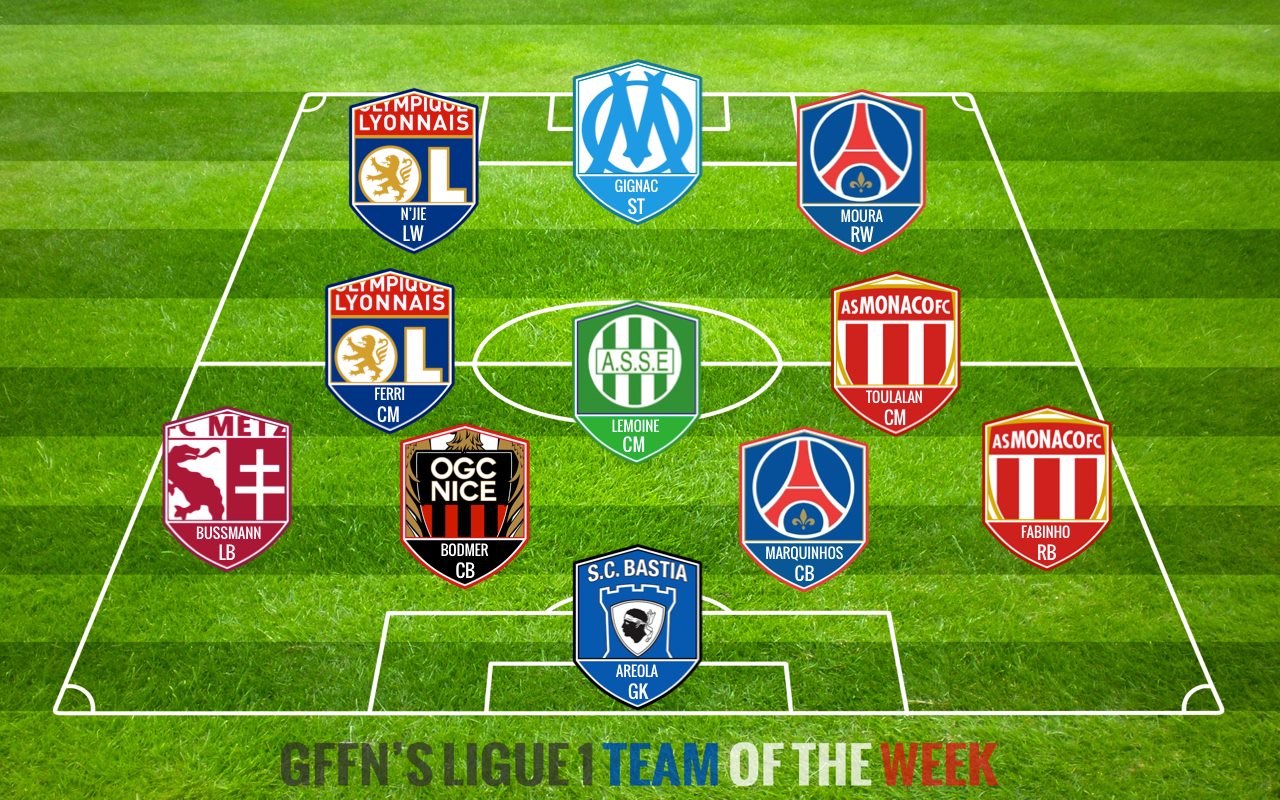 Get French Football News’ pick of the top performers in a rare midweek session of Ligue 1 action.

The PSG loanee was decisive as he excellently kept out a penalty that was foolishly conceded by the hot-headed Cahuzac for making contact with referee Tony Chapron, earning him a red card. The game might have ended in a 0-0 stalemate, but as you can imagine for a team with a numerical disadvantage, Areola was a busy man. Claude Makelele’s side are yet to really settle this season thus far, but their young goalkeeper earned them a point regardless on Wednesday night.

Very much an unsung hero already last year when Les Grenats battled it out in Ligue 2, Gaetan Bussmann takes the plaudits with a rather atypical finish from a corner that saw Metz overcome Guingamp in what was their first away victory of the season. His tirelessness down that left hand side coincided with an instilled priority to defend first and attack later, which in itself is a rare quality with full-backs generally becoming more offensive engines, sets Bussmann apart from most of his other colleagues in Ligue 1 thus far.

After an average opening season with Les Aiglons during the 2013/2014 campaign, Bodmer’s newly established role as captain is having a positive effect on his on-pitch performances. The former PSG man was the only scorer as OGCN surprisingly dominated proceedings against a side that found themselves top of the table only ten days ago in Lille. His level-headedness and experience will undoubtedly aid Nice further as they will most likely battle against relegation in a defensive line that otherwise lacks in confidence.

No Barcelona, no problem. At least this seems to be the mantra that one of Brazil’s most promising central defensive talents has adopted since the restart of Ligue 1 action last month. The player had wanted to move to the Catalan giants this summer but his ultimate wish of consistent game-time at his preferred position of centre back has finally been fulfilled due to the injury of Thiago Silva. His solidity was evident again on Wednesday night against a feisty Caen side. Mathieu Duhamel has yet to have as poor a game as he did against Les Parisiens, and Marquinhos was largely responsible for this.

Monaco played some delightful football at times against Montpellier and deserved to win the game by more than just the one goal. Excellent build-up play by ASM’s Brazilian right-back and loan youngster Fabinho often contributed to opportunities for an admittedly slightly laboured Dimitar Berbatov. Defensively, he coped aptly with the challenge that the in-form Anthony Mounier posed down the Rio Ave owned player’s flank.

The newly established captain of the Principality side seems to have taken on a new lease of life since the arrival of manager Leonardo Jardim and this was evident again on Wednesday night against Montpellier. Away from home against some typically tricky attacking MHSC talent in Morgan Sanson and Anthony Mounier, Toulalan acted as a human wall and ensured that the home side kept their chances to a minimum. His understanding with the likes of Kurzawa and Ferreira-Carrasco also showed with some excellent link-up play.

Jordan Ferri became the top assist maker in Ligue 1 at midweek as Lyon trounced an out of sorts Lorient side 4-0. His technical ability is delightfully subtle, as is the amount of donkey work that the 22 year old is putting at present. He might have even scored towards the end of the game, were he not a little more lucky. Lyon fans continue to rue the absence of Gueida Fofana, but Ferri’s chameleonic nature in the midfield is plugging the gap.

The heavily underrated central midfielder Fabien Lemoine was at the core of another St Étienne performance as the Loire side could only manage a draw against Bordeaux on Thursday night. After a charged first half, in which Lemoine notably contributed be setting Saint-Maximin and Gradel up on numerous occasions, but neither was able to convert. Lemoine typifies that new-age tag of the “box-to-box” midfielder and his defensive contribution was noted especially in the dying minutes of the second half as the game became more feisty and stretched. For a man of 27 years of age, his engine is enviable.

PSG’s petite Brazilian winger came under fire this week after former teammate Jeremy Menez called Moura out for failing to contribute sufficiently in terms of goals since his arrival nearly two years ago. Lucas duly silenced his critics with some dancing footwork to get into the box before lashing home to give Les Parisiens an important lead against a plucky Caen outfit. Moura’s offensive contribution was both consistent and versatile, but his ability to win fouls when PSG were under pressure in their own half was particularly vital in a game where the champions were riding low on confidence.

APG added another two goals on Tuesday night against Reims, bringing his Ligue 1 season’s total to 8 goals in just 7 games. One could throw a flurry of superlatives at the controversial Frenchman, but you get the idea. It is simply a joy to watch a motivated Gignac receiving a more liberal licence to actively poach in and around the area. His technique and versatility in terms of striking the ball are arguably unparalleled in the league and have been for the past two years, but now he is getting enough opportunities to showcase that, week in, week out.

A surprise package this season, the 21 year old Cameroonian finished Wednesday night with his first professional goal for Lyon on the day that his contract extension until 2019 was announced. It is all happening very fast for the youngster, after recently playing a pivotal role in some of Cameroon’s recent international fixtures, but perhaps it is merited all at once with his bag of tricks and pace making him a dangerous winger, but, perhaps more excitingly, his presence of mind could make him into a future lethal forward man.