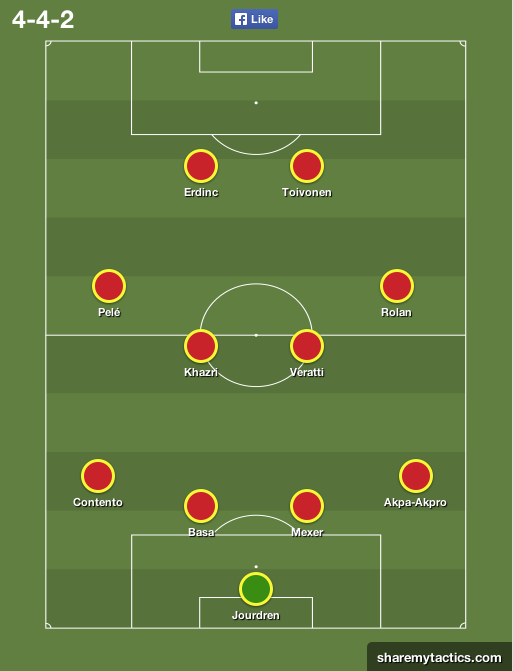 As another new Get French Football News series, Simon Scutt takes a look at the top 11 performers from each weekend of Ligue 1 action. This week’s top performers include just 3 players from last season’s top four clubs.

One of the Ligue 1 summer’s soap operas was the Marseille stadium mystery .A dispute over rent payments led to people asking the question of  just where were OM going to play their home games?  Thankfully, it was resolved and Marseille would indeed begin the season at the Velodrome. First visitors to the refurbished stadium were Montpellier who came and left with the three points. Marseille huffed and puffed but were unable to get passed Montpellier.

Probably the most striking score-line of the weekend was the Sunday night clash between Bordeaux and Monaco when it finished 4-1 to the home side; thus condemning Monaco to a second defeat of the season. Bordeaux went on to score four goals in the second half one of which came with an assist from new signing Contento.

Caen took on Lille on Friday night, a game played in Le Mans while Caen’s stadium is upgraded to Ligue 1 norms. The game itself was fairly unspectacular with Caen looking the most likely to break the deadlock. This was until the game was turned on its head by a tremendously debatable penalty decision given in Lille’s favour. This not only turned out to be the only goal of the game but reduced the home side to ten men.  Lille’s defence stood strong against a lively Caen attack with Basa impressing as the Montenegrin continued his impressive form from last season.

Dream debuts don’t come dreamier than scoring twice for your new team in a 6-2 victory. This is exactly what happened to Mozambican international Mexer. His two first half goals set Rennes on their way to a first win of the season. The first came from a nicely worked free-kick routine that saw the central defender smash home the ball from the edge of the box. Before he towered above the Evian defence to score his second and Rennes’ third.

Toulouse continued their superiority at home to Lyon with a 2-1 win on Saturday night, it’s nine years since Lyon won at the Toulouse Stadium. Le TFC dominated the first half and deserved their first half two goal lead. The first goal came from wing-back Akpa-Akpro who highlighted the attacking freedom allowed in Toulouse’s system. Akpa-Akpro was played in on goal after a defence splitting ball that put him one-on-one with the keeper.

In a game that is likely to be known for Brandao’s off the pitch antics. PSG secured their first three points of the season in serene fashion at home to Bastia. Veratti was a standout performer in the middle of the park. His performance will of great heart to PSG who will travel to their bogey team Evian next week without Thiago Silva and potentially Zlatan Imbrahimovic who went off injured.

Lorient met Nice on Saturday with both sides have secured impressive wins on match day one. Yet neither side could find a way to defeat the other, often a result of meetings of these two sides in Brittany.  Carrying on from his excellent performance at Monaco last week Pele was again very lively down the flanks creating many opportunities for his teammates.

Football is often about taking your chances and that was the key to Bordeaux’s remarkable win over Monaco. They were efficient with their chances and secured a famous win. Rolan showed poachers instincts to poke home the home side’s first and third goals in what must be described as a rout of the expensively assembled Monaco side.

New Bordeaux manage Wily Sagnol talked about a change in style upon arriving at Bordeaux and in order for him to do such that he recruited Khazri from Bastia who showed against Monaco just why Sagnol brought him to the club. He was a livewire presence in the Bordeaux midfield and he won two penalties for his side, one of which he converted himself. Khazri looks to have carried on from where he left off at Bastia. Bordeaux fans will look forward to what he and his teammates are now offering them.

Rennes bounced back from their defeat at Lyon with a resounding trouncing of Evian with three players netting a brace each. The Rennes squad has gone under something of a metamorphosis as Philippe Montanier builds the team he desires. Toivonen arrived in the winter window past and has proved a shrewd addition.  He scored seven in fourteen late season appearances last season and now has two in two this season. He opened his account this season with a brace the first of which was a tap in

One of Ligue 1’s most in form player was at it again on Sunday. Erdinc made it three goals in two games with Sainté’s third. He also added an assist to add to his account for this season. One of only two teams to have taken maximum points from their opening games Saint Etienne have mirrored their beginning of last season and will only hope that they can do one better than last season and made it past the Europa League play-offs.