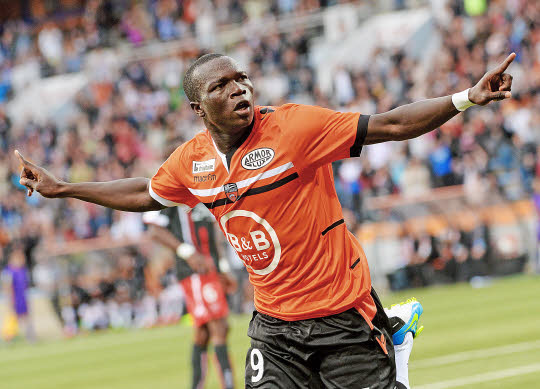 As we all gradually acclimatise to the end of our weekly dose of league action and set our sights on the summer’s entertainment, it’s time to look back and assess the standout players of the 2013-14 Ligue 1 season. However, rather than focusing on the usual suspects who have dominated discussion throughout the campaign, this article takes a somewhat different approach.

While Zlatan Ibrahimovic’s goalscoring exploits and the explosiveness of young stars like Serge Aurier and Layvin Kurzawa have mesmerised us all, there remains a group of players whose brilliant showings over the course of the campaign have not been fairly represented for one reason or another. As such, here is our nod to Ligue 1’s unsung heroes – five players who, despite their continued excellence, have not received due recognition.

Of course, narrowing it down to just five selections that everyone can agree upon is an impossible task, but every effort has been made to include a range of players and to justify the inclusion of each. There are big names who perhaps do not get the media attention of their more famous counterparts, club heroes who deserve to be lauded on a national level and youth players whose progress should be attracting more widespread optimism. Why not share thoughts on your own unsung heroes in the comments section?

Heading up the list is a player who has been one of the season’s most outstanding defenders not only in Ligue 1, but also the whole of Europe. Loic Perrin has been a rock at the back for Saint-Etienne throughout the campaign and played a huge role in their push for Champions League football.

Having inspired Les Verts as club captain for many years now, he is quite simply the soul of the club. While the likes of PSG’s Thiago Silva and Lille’s formidable pairing of Simon Kjaer and Marko Basa have continually been praised, however, Perrin has often been left unheralded. Despite his excellence being rewarded within the club – picking up Saint-Etienne’s player of the year award – Perrin is yet to receive anything like the praise he merits on a wider scale.

Aside from boasting a goalscoring record rivalling that of some of the league’s proven marksmen this season (he scored as many goals as Henri Saivet and André Ayew, for example), Perrin has accumulated some of the best defensive stats of anyone in the league,  notably averaging a league-best 11 clearances per game, and has been his side’s standout player in many matches.

Looking ahead, the 28-year-old’s future remains unclear. Perrin has done little to hide his disappointment at missing out on qualifying for Europe’s elite competition and could well be set for a move away from the club this summer. While he is loved by the fans and loves the club in return, he could , and perhaps should, be playing at a much higher level. The player himself hasn’t ruled out an exit and, given his age, this summer could well be the point of no return.

Despite possessing end of season figures that are nothing to write home about on the surface, with just one goal and one assist to his name, Idrissa Gueye has played a key role in Lille’s excellent season. While many of the plaudits inevitably go to goalkeeper Vincent Enyeama and centre backs Kjaer and Basa for their more eye-catching displays at the back, Lille’s solidity was down to a collective success that Gueye typifies perfectly.

After a remarkable defensive campaign that saw Lille concede just 26 goals, all of the media attention was drawn to Enyeama’s impressive run of 1,061 minutes – and 11 consecutive clean sheets – without conceding between September and December. Indeed, after his goalkeeping heroics helped him seal the Marc Vivien-Foe award, that focus seemed well placed. Without Gueye, however, none of it would have been possible. With his incredible work-rate and versatility across the middle of the park allowing him to excel on a consistent basis throughout the campaign, he deserves to receive much more credit than has been forthcoming for his decisive role in such a formidable back line.

Ultimately, you can only hope that he is more roundly congratulated within the club. Now that the season is over, attention has turned to holding on to the 24-year-old powerhouse and, with reported interest from top European clubs including Arsenal, it is clear that his important contributions have not gone unnoticed elsewhere.

With some of the most exciting stars of this season plying their trade at left-back, it is all too easy to overlook the contribution that Maxwell made to PSG’s dominant, title-winning campaign. While Lyon’s Henri Bedimo and Monaco’s Layvin Kurzawa made headlines on a regular basis, totalling six goals and 11 assists between them this season, Brazilian Maxwell has been one of the most consistent performers in the league without being recognised as such, chipping in with a few key goals and always playing to the strengths of his more illustrious colleagues. Indeed, many would agree that the 32-year-old has just enjoyed the best season of his career to date.

Despite the risk of anonymity that comes with playing a supporting role to PSG’s plethora of stars – from the prolific Ibrahimovic, the metronomic Motta and the classy Verratti, to the dominant Brazilian back-line of Alex and Thiago Silva – Maxwell’s understated technicality and unfailing excellence has fittingly seen him rewarded with a place in the Brazil squad for the World Cup.

With Lucas Digne continuing to impress since moving to the capital, it is a testament to Maxwell’s determination that he has largely managed to keep the youngster on the sidelines, particularly in the big matches. As Digne’s experience grows and Maxwell edges ever closer to retirement, however, it is only right that we now take the time to enjoy a player who has surprised many with his late peak.

Perhaps one of the more surprising inclusions on the list is 22-year-old centre forward Martin Braithwaite. Whilst he certainly hasn’t been hugely prolific up front for Toulouse this season, he made a promising start to his Ligue 1 career and his overall contribution hints that there is much more to come.

With seven goals and seven assists in his first season in France, Braithwaite demonstrated that he already has a well-rounded set of skills at his disposal and, while Wissam Ben Yedder’s 16 league strikes make him a more obvious target for praise, Braithwaite’s ability to create and to utilise space – coupled with his keen eye for a pass – have helped his strike partner and his team as a whole.

This less direct contribution is certainly not lost on Toulouse coach Alain Casanova. Speaking after his side’s season-ending 3-1 victory over Valenciennes, Casanova sought to underline Braithwaite’s ongoing influence despite Ben Yedder taking the majority of the limelight: “Wissam had a great season and I’d like to include Martin Braithwaite’s work as a reason for Wissam’s season as Martin was unstinting in his efforts,” he said.

Ultimately, while Serge Aurier has grabbed most of the plaudits at Toulouse this season – with more shots on goal than anyone in the Toulouse side other than Ben Yedder and Braithwaite – the young Denmark international at the other end of the pitch will be quietly attracting interest. Having arrived for just €2 million, he has already justified his purchase and could go on to be a brilliant bargain signing.

When shortlisting the top strikers in Ligue 1 this season, it may be hard to look beyond the likes of Zlatan Ibrahimovic, Edinson Cavani and André-Pierre Gignac. Take a closer look though and there are others lurking just behind who are equally worthy of praise. Most would agree that any player scoring 16 goals for a mid-table outfit should figure right up there in the discussions and, when that player is just 22 years of age, the entire football world should be sitting up and paying attention. For Vincent Aboubakar, however, the global adulation is yet to surface.

Despite being one of the unsung heroes of the Ligue 1 season, the 22-year-old Cameroon international is undoubtedly finally starting to realise his enormous potential. He is not there yet, by any means, but his physical dominance and tremendous athleticism have allowed him to impress on a regular basis throughout the campaign. Add to this his eye for a pass, the technical ability complementing his physicality and a never say die attitude and undying work-rate that have seen him score three goals in added time at the end of matches, and you have an exciting player on your hands.

While Aboubakar’s potential for greatness is nothing new in itself, it is time that his achievements were put into perspective. Anyone who has followed his progress over recent seasons will note that his attacking output has exploded this season in a similar fashion to other emerging strikers across the continent. With forerunners such as Atletico Madrid’s Diego Costa or Liverpool’s Daniel Sturridge similarly struggling to convince before bursting into life to place themselves among Europe’s elite frontmen, Aboubakar looks similarly equipped to make the leap to stardom. The reason as to why his exploits have not received more widespread praise remains something a mystery, but perhaps that will change with an impressive showing for Cameroon at the World Cup this summer.