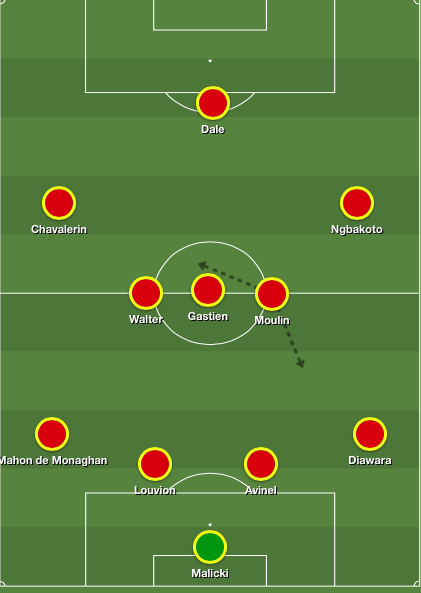 Simon Scutt takes you through his Ligue 2 team of the week after the first fixtures of 2014.

Gameweek 19 saw a lot of goals in fact only two keepers kept clean sheets. One of those was the Niort keeper Paul Delecroix but Niort were taking on CA Bastia, who possess the worst attack in the league. Making this week’s team is Malicki of Angers, he was kept busy throughout the game by Nancy who attacked often and the former Lille stopper pulled off a series of impressive saves.

Tours hosted Caen on matchday 19 hoping to climb onto the podium ahead of Lens, their objective was achieved with a good home performance against a strong, if up and down, Caen side. Opening the scoring on the stroke of half time was Malian international Diawara who deflected a free-kick home and thus giving his side the opening goal.

Probably Friday night’s mostly anticipated fixture, league leaders Metz travelled across France to Le Havre. Le Havre have already humbled high-flying opponents at the Stade Oceane this season when Lens were put to the sword to the tune of a 6-2 shellacking. Metz had been warned.  Although, Le Havre looked to be in trouble when they were reduced to ten men in the 64th minute yet it was defender Louvion who put Le Havre back into the lead when his 71st minute header beat the stranded Carrasso in the Metz goal.

Clermont have been something of a surprise package this season, they narrowly escaped relegation last season but this time around they have been sitting fairly pretty in the upper echelons of Ligue 2. Troyes found out just hard Clermont tend to be to beat as they  managed  to draw 2-2 after a late equaliser.  It was Avinel in the Clermont defence who seemed to have given his side the three points when he made it 2-1 to Clermont with 2 minutes of regular time to go yet he was to find himself disappointed a few mintues later when the Troyes equaliser arrived.

Winning the award for name of the week goes to Creteil defender Boris Mahon de Monaghan, now it is not just for his name that he merits his inclusion in team of the week, he opened the scoring in Creteil’s game against Chateauroux on Saturday. Creteil took all the three  points in a crazy game. Chateauroux were leading 2-1 at half time. Until two own goals in the space of four minutes saw the home side to victory.

Coming in with the second best strike of the weekend is Clermont’s Thibault Moulin. His first half strike flew past Petric in the Troyes goal and caused the home side to trudge off the pitch at the Stade de L’Aube to a chorus of boos. It was his third of the season for the 23 year old Frenchman. While the points would go on to be shared by the two teams, Clermont take another draw whilst Troyes are not able to get back to the winning ways of the autumn.

It’s not often that substitutes get to make Team of the Week but after Xavier Chavalerin’s strike against Caen an exception ought to be made here. His long-range looping dipping volley found its way into the Caen net ; a sumptuous way of doubling Tours’ advantage. It was his first goal for the club and he will sure hope it helps him get more minutes in Tours’ push for promotion.

Making the team of the week again is Metz’s difference maker Yeni Ngbakoto. His two goal secured a point at Le Havre. Neither goal was particularly special, more along the lines of tap-ins than long-range thunderbolts. Yet, you have to be there to take the chances when they present themselves and Ngbakoto was Johnny on the spot for Metz. He really is an important cog in the impressive Metz Machine.

In one of the games taking place on Saturday lunchtime AS Nancy went to take on Angers and it was a lively game between two sides with genuine promotion aspirations albeit two sides lacking consistency of sustained periods during the season.  Walter secured the draw for Nancy after a lovely exchange on the edge of the Angers box. He was there to apply the finish for Nancy as he fired across goal and into the bottom corner of the net.

In Friday’s most one-sided match Dijon hosted Istres and made easy work of the side from the south of France. Two goals in each half set up a very simple three points and a nice start to 2014 for Dijon. The first two goals came from summer recruit Johan Gastein. Arriving from Niort in the summer Gastein scored his first two goals for the club in a nine minute spell in the first half. Dijon are now sitting just two points off the podium and with a strong run could return to the elite for the first time for 2 seasons.

Arles-Avignon went to take on Auxerre in the battle of the A’s on Friday. It was a case of both star players making the difference, as Paul-Georges Ntep and Maurice Dale scored the goals for their respective teams. Dale equalised for Arles in Burgundy keeping them in their mid-table security. A relief after last year’s relegation strife.