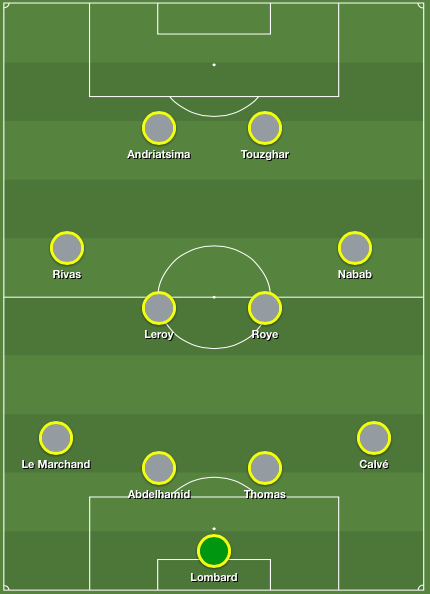 Our resident Ligue 2 expert Simon Scutt presents you with his team of the week for the 20th round of matches in France’s second tier:

Without a doubt the shock of the weekend was CA Bastia going to Nancy and coming back with all three points. The Corsican side had only one victory to their name thus far this season and no-one expected them to add to that when they went to Lorraine. A famous 1-0 made all the more possible by the performance of stopper Lombard.

Caen continued their push for the podium with a win over Chateauroux on Friday night. Defender Jean Calve was there in the second half to covert a free-kick with a sumptuous finish. Placing the ball into the corner of the net from the edge of the box. An important goal for Caen and their ambitions for promotion. Calvé helped his side to win a match they were in danger of dropping points in.

Arles-Avignon welcomed Troyes to the Parc des Sports on Saturday lunchtime. It’s fair to say that Arles have not got a reputation for goal-scoring so when they put three past Troyes it was something of a surprise. Yunis Abdelhamid got the goal-scoring party going when he forced the ball home from a goal-mouth scramble following a corner. Arles took themselves to eighth in the table, whilst Troyes find themselves in something of a free-fall sitting as they do in thirteenth.

Angers went down to play Chateauroux and came away with all the points and a clean sheet. The victory was seldom in doubt as an impressive performance ensured maximum points and their position maintained on the podium. Angers are the best performing team away from home and have only conceded 14 goals on the road; their defence a key element to their promotion charge.

One of the major exploits of the weekend was Le Havre ending Clermont’s home invincibility. They became the first team to take all three points from the centre of France. Their 1-0 victory all the more impressive given the Clermont pressure in the second half. Le Havre extend their unbeaten run to five games in taking their second away win of the season. The defence did excellently to resist in the second period and deserve the three points.

What is age? Just a number for the evergreen Jerome Leroy, his age made the difference for Istres in an important game against Brest.  A match that was delicately poised until Leroy made his telling inteverntion. On 62 minutes his classy finish gave Istres the lead before a stroke of luck in the 74th minute saw his shot deflected home. Totally wrong-footing Alexis Thebaut in the Brest goal. Istres take the points and begin to edge away from the dropzone, while the Bretons find themselves plunged closer and closer to danger.

Niort welcomed Tours on Friday night and there was no shortage of goals for the spectators. Tours are very much in form and were only a point behind angers going into this game, a big challenge for Niort. A very lively game ensued, jam-packed with chances. Roye grabbed Niort’s second goal just before half-time  making it 2-0 to the home team. And he was there once more on 71 minutes to poke the ball home and re-establish the two-goal cushion. Niort would win 3-2, three very good points to take.

When Coupe de la Ligue semi-finalists Troyes travelled down to Arles this week they were met by a momentous occasion, Arles scoring three times in the same match. They had scored 15 goals in 19 games going into this game; only Brest and CA Bastia had scored fewer. Nabab scored two of those goals to give his side the win.

Second player fifth on Saturday afternoon when Dijon went to Lens, an entertaining game played out in a great atmosphere in front of 25,000 passionate fans. However the Lensois faithful was sent into shock when Dijon hit two unanswered goals in the first eight minutes. In an eventful first half Lens pulled one back after 25 minutes and both sides had chances to increase the scoring. Dijon lost a man in the second half and were made to pay, eventually, by Lens. Touzghar was on the spot to head home in the 84th minute.  A good point for Lens, given the start they had.

Yes, you read that correctly two CA Bastia players in the team of the week. And who can blame us? They achieved a monumental result in defeated Nancy away from home. Ok, it was something of a smash-and-grab and granted the goal came from a colossal error from the Nancy defence. But nevertheless the ball needed putting in the net and Rivas did that with aplomb. It may not be enough to keep the Corsican side in Ligue 2 but it will be a memorable game for their fans.

Creteil travelled to the runaway leaders Metz on Monday evening and would have expected a much different game than the previous season when these two sides were both in National. While Creteil have been doing well in Ligue 2, it is nothing like how well Metz have done. So, taking a point from the game will be a source of pleasure for Creteil. Andriatsima was on hand to transform the penalty and thus secure the draw.