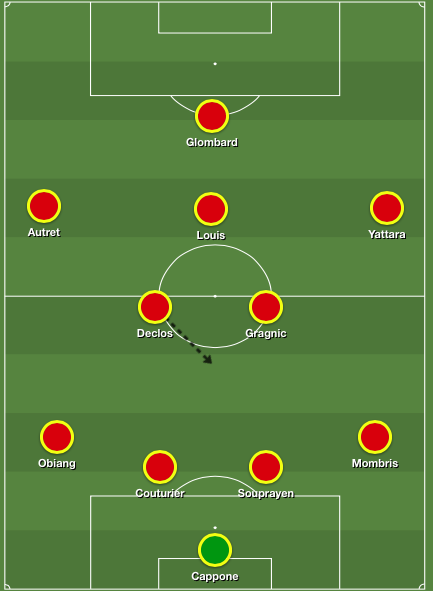 Simon Scutt takes you through his Ligue 2 Team of the Week from the twenty-second round of fixtures in this 2013/2014 campaign:

Laval have not conceded a goal away to lens in five matchs, this record was continued satruday lunchtime agter a heroic performacen from the Laval stopper Cappone. He made a number of crucial saves keeping the Lens attack at bay. Cappone will have found a new set of fans in Metz after his display ensured that Metz remained top of the table. It is also an important point for a laval side in a relegation battle.

Le havre may have come unstuck in Nancy on Monday night but Jerome Mombris had a memorable night when he put away his first goal of the season. His stooping header gave Le Havre a way back into the match when they levelled things up after a half an hour. Le Havre may be stuck in mid-table these days but it wasn’t so long ago they were looking at the relegation zone with genuine fear and dread. Mid-table safety is not to be sniffed at.

The situation at the bottom of the table is very tight, four points separate 19th and 15th, literally anyone could be dragged into the scrap. So winning games is naturally very important and that is exactly what Chateauroux did on Friday night. They took the lead against Auxerre in the second half when Obiang’s cross was met by Florian Tait. Chateauroux would go on to double their advantage and climb out of the bottom three.

Dijon chalked up their fourth consecutive home win against a poor Brest side this week. Their three-nil win keeps them dreaming of a return to the big-time after their 2011-12 season in Ligue 1. Souprayen plays his part in the Dijon defence that can claim to be the third best in the division. They are also just four points off the podium and with teams above them slipping up regularly, they must be thinking that a good run of form at the right time could be just what they need to get promoted.

Two scoreless draws in a row may not be results to scream from the rooftops but when you’re mired in relegation drama those two points may be the difference between safety and relegation. Also, when away from home up against one of the league’s best teams in Lens, a point is often the sum-total of the ambition of most sides. Defintely a point gained in the north of France.

Nimes possessed the third worst home record in Ligue 2 this season and were probably not feeling too hopeful with Tours coming to town. What transpired was something not in the script. Nimes ran out 3-0 winners and Vincent Gragnic scored the second with a deft finish. Nimes remain a solitary point from the drop-zone but this result will have done them no end of good.

Clermont took on Arles on fridya night in match pitting the two sides with the most draws this season. So, it was hardly a shock when the two sides cancelled each other out. Jordi Declos was the hero for Arles as he came off the bench to snatch a point for his side.

Jeff Louis (AS Nancy) AM

Without a doubt the standout perfomer of the week was Nancy’s young attacker Jeff Louis after his tremendous performance against Le Havre. A goal from his left foot, his right foot and his head turned into a perfect hatrick from the 21 year old Haitian. In a game that ebbed and flowed Louis was at the heart of everything ASNL did offensively and sealed a 3-2 victory against the Normands. The result consolidates Nancy’s position in the chasing pack for promotion, also after a poor run this result will be just the tonic for the side from Lorraine.

Caen entertained Troyes on Friday night and found themselves behind with the minutes ticking away. It was left to Mathias Autret, the 22 year old winger fired home in the 87th minute to equalise things for Caen. Autret is on loan from FC Lorient in Ligue 1 until the end of the season he will hope his performances in the second tier will have impressed Christian Gourcuff and the FCL hierarchy sufficiently to afford him some game-time come next season.

The conventional wisdom is that a sign of a good side is one that is capable to win when not playing well or is at least capable of pulling results out when it looks unlikely. Angers were the masters of ‘le money-time’ last season seemingly always able to turn games on their head after the 90th minute. As Metz slipped up again Angers had an opportunity this week against rock-bottom CA Bastia. It looked like it would be a chance wasted until Yattara popped up in the 88th minute to turn a dispointing 0-0 into an important 1-0. Angers stand a point behind Metz level on points with Lens, with Dijon the closest team below them but they are four points back.

Looking at the fixtures for this week a real stand-out match was the game between Niort and Metz. A match that opposed the in-form team of the league against the former runaway leaders who has since been in freefall and it would be form that told on Friday night. Niort ran out two nil winners over Metz. Two goals deep in the second half allowed them to keep their winning run going.  Niort had striker Luigi Glombard to thank, he opened the scoring and set up the second goal. Metz are still top but any leeway they had has gone.

Bafétimbi Gomis denies any agreement with a club for June