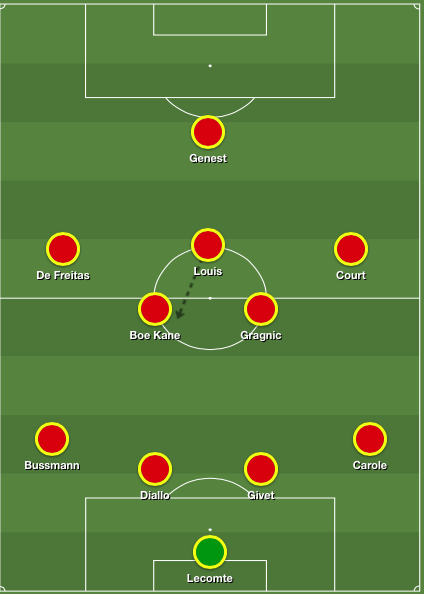 Simon Scutt’s weekly Ligue 2 column is here as he picks his best XI from the 23rd round of French second division action:

Dijon have only won once away from home this season and weren’t able to do so at Laval on Friday night. Former Lorient man Lecomte made a series of impressive parries and saves to deny the men in orange. Dijon dropped a place to fifth after this result but will still be hoping for promotion for the rest of the season, they are only three points off the podium.

Dijon were made to sweat it out for their point in north west France as Laval dominated pretty much from start to finish. The defensive performance of the men in black on Friday was marshalled by Zakaria Diallo. The Franco-Senegalese defender used his size to stand firm against the Laval attack, who were without their star-attacker Christian Bekamenga and thus were not able to transform pressure into goals.

When Arles took on Niort it was a match-up between the best home record in the league and the most in-form team. An interesting subplot is developing in Ligue 2 as the battle for the team who has recorded the most draws. The battle is between Arles, Dijon and Clermont all on ten. Arles and Niort cancelled each other out with neither side really being able to better their opponents’ defence.

Metz were without a win in six matches in Ligue 2 and as such had lost all of their seven point advantage they held going into the winter break. Caen were the visitors to Metz this week and thing got off to a great start for Metz when full-back Bussmann headed home from Lejeune’s corner after just two minutes.

In taking all three points at home to Lens on Saturday Troyes moved back into the top half of the table after a worrying slump in results. Having been fourth in mid-november they dropped as low as fourteenth in mid-january. This slump can be attributed to the fact that they began conceding more goals. So for Troyes to head back up the table they will need their defenders and Lionel Carole was on form on Saturday making a number of important blocks and interceptions.

Nimes went to Le Havre having only won one game away from home all season. They put in a dominant performance against a Le Havre side who were, safe to say, not at their best. Nimes created many chances to Le Havre’s one or two. It was Gragnic who was pivotal in their victory and got the goal to seal the victory. Three precious points in the relegation battle that is seriously tight.

Auxerre took on Istres and claimed all three points thanks to midfielder Yann Boe Kane. He was there to bundle home on the goal-line. Istres were reduced to ten men in the first half and themselves are in a precarious situation. Auxerre meanwhile sit in 12th and are stuck in mid-table mediocrity.

Jeff Louis (AS Nancy) AM

For the second week in a row Nancy has Jeff Louis to thank for another important victory. This time against Tours he turned the game on its head in the space of ten second half minutes. His thunderbolt strike equalled things up for ASNL before his second came from a lightening quick counter-attack and he latched on to it before finishing coolly.

In an entertaining match at the Stade de L’Aube Troyes welcomed Lens with the objective of getting over their Coupe de la Ligue semi-final loss to Lyon and hoping to relaunch their promotion bid. The game looked like petering out to a tame draw despite all the chances. That was until Troyes obtained a free-kick some 40 yards from goal. Yoan Court stepped up and with a little bit of help from the wind he was able to deceive Aréola in the Lens goal. That was the only goal of the game and Lens’ lead over the chasing pack was cut down to two points. The match ended with raised tensions as Lens were inscensed their opponents did not put the ball out of play in the build up to the free-kick. Lens sub-keeper Rudy Riou was sent off from the bench among many yellow cards handed out.

Chateauroux travelled to Corsica with the worst away record in the league, just two points away from home. CA Bastia are coming into something resembling form in recent weeks as they look to claim some respect from their campaign. To that end, they took the lead in the first half and went in a goal to the good after 45 minutes. It was left to De Freitas to bring Chateauroux back into the game. His free-kick on 54 minutes was delicately placed into the bottom corner. From here on in it was all Chateauroux and they ran out 4-1 winners.

Starting a match well is always vital. Creteil proved this to be true when within the first 17 minutes of their home game against Clermont when they went two goals up. Both goals came from assists from Ludovic Genest which gave Creteil the win. The newly promoted side sit in 13th and will be enjoying their mid table security.

N.B. Brest vs Angers was postponed due to inclement weather conditions.

Find all the latest Ligue 2 results and fixtures here.