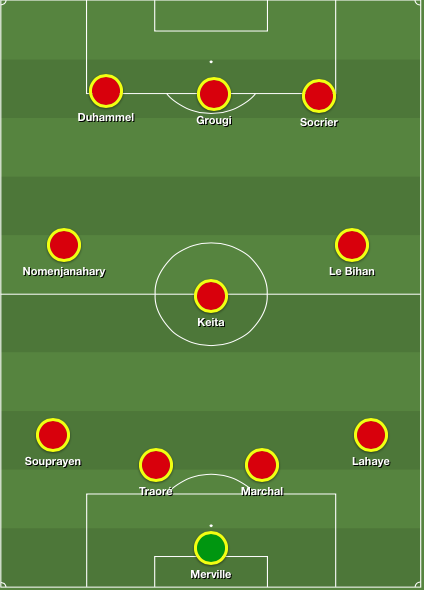 Friday night saw the leaders Metz travel down to the south of France to play Nimes who have been pulling off some impressive results in recent weeks. Metz had not started 2014 at all that well and need a result to reignite their Ligue 2 title charge. They created some decent chances against Nimes but found themselves up against a Nimes goalkeeper in fine form. He pulled off some remarkable saves especially one from Yeni Ngbakamoto. Nimes are three points off relegation and will need more such performances from their squad to remain in the division next year.

Niort are simply unstoppable at the moment. Their last six matches have brought five wins and a draw. This run continued away at Clermont on Friday night, when they won 1-0. They survived several scares in any case as Clermont huffed and puffed. Lahaye was a part of the strong defensive unit; Niort have conceded just 3 goals in the league since the beginning of the year. Niort have broken into the chasing pack and are just two points off third place.

The relegation battle is awfully tight at the bottom, realistically anyone up to Creteil in 12th place could genuinely go down given the right (or the wrong rather) combination of circumstances. So while Brest sit in 19th right now a couple of wins could send them back to safety. Coming into this game in awful form, Brest will be delighted to have stopped the rot. They secured the three points thanks to a strong defensive performance and kept a clean sheet that was well earned. They will now look to their game in hand against Angers to climb back up the table.

Metz achieved their first clean sheet of the calendar year down at Nimes and had their captain Sylvain Marchal to thank for this. Metz have not been the irresistible force that they were pre the winter break. In fact, they had a large slice of luck towards the end of the game when a ball ricocheted off bar and post and could have gone pretty much anywhere. But Metz resisted and survived with a point from their trip down south.

Dijon welcomed seemingly doomed CA Bastia this week and handed out a fairly routine victory over the league’s bottom club. Dijon have bounced back from a scare at Laval last time out where they escaped with a nil-nil draw. On that occasion that was not a bad result, however too many draws have been costing Dijon from spending much time on the podium. Yet, they are a single point off third after a professional and efficient display. CA Bastia have surprised a couple of sides in recent weeks. Dijon did what they needed to do to continue their excellent home form and kept a clean sheet in the process.

Good things come to those who wait. In the 93rd minute Lens saved a point against Le Havre thanks to the wonderfully named Lalaina Nomenjanahary whose header levelled things up. Lens will be relieved as the result keeps them apace with the other two sides in the top three who both, also, drew this week. A packed house of around 30,000 were sent into raptures when Nomenjanahary equalised.

Certain teams in the relegation battle seem to be achieving some good results, Istres are one them. They took on Tours at home on Friday night, a Tours side who were looking like promotion candidates not too long ago. What’s more, they possess the equal best attack in the league. So for Istres to defeat them must go down as an excellent victory. Istres had young midfielder Naby Keita to thank as his first half header ensured victory.

When going away to play in a hostile atmosphere the opposition will talk of silencing the crowd. This is precisiely what Le Havre did and this was due to Mickael Le Bihan’s 20th minute opener. In all truth, Le Havre had many opportunities to wrap up the three points and a good number of chances went a begging. The question will be asked as to whether it’s a point gained or two dropped. Le Havre are going to need more points to pull themselves out of the relegation mire.

Caen were obviously not suffering after their terrific ‘close but no cigar’ performance, away at Lille, in the Coupe de France when after nine minutes of their league match with Arles-Avignon they took the lead. Duhammel finished adroitly from Felippe Saad’s through ball. Caen ended Arles’ ten match undefeated run by a goal to zero. Both sides could have added to their tallies as an inordinate number of high balls were floated into the respective boxes, presumably seeking to exploit the windy conditions in Normandy. Caen are now four points off the podium and are one of a number of teams counting on a late season surge to get them promoted.

Angers and Laval played out a lively local derby in the sunshine on Saturday lunchtime. Coming into the match on the back of a postponement at Brest, Angers have progressed to the quarter-finals of the Coupe de France where they will play the delightfully named Moulins. Laval meanwhile had not exactly been the entertainers-in-chief of the division having played out three consecutive scoreless draws. The game took flight during the 22nd and 23rd minutes when both goals were scored. Laval opened the scoring before Richard Socrier’s deft finish levelled things up for the Angevins. Laval missed a glorious opportunity for three precious points when they missed a late penalty. Angers are very much on Metz’s tail and their game in hand could take them to within a point of the leaders.

Saturday’s match between Brest and Auxerre had all the hallmarks of being a classic. Brest had not won a match for 3 and a half months. Auxerre had not won a single match away from home all season. One of those records would go. It would be the Bretons who would be smiling come the final whistle. Nicolas Verdier scored his eight goal of the season when his nice finish beat Leon in the Auxerre goal set up by an intelligent through-ball from the long haired Grougi. Verdier would go to blot his copy book by missing a penalty to ensure victory for the hosts. Brest are still precariously placed but with a game in hand to play against promotion chasing Angers.

All the Ligue 2 results from Gameweek 24 here.