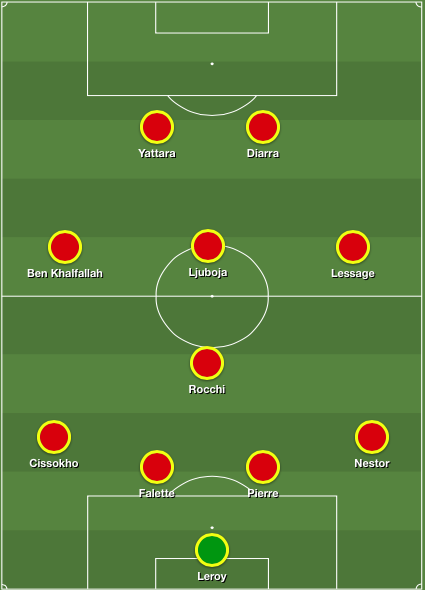 Ligue 2 columnist Simon Scutt takes you through his weekly Ligue 2 best XI of the 25th round of fixtures.

Tours took on Dijon on Friday night where the visitors were a point off the podium ahead of the game, while the home side were on a bad run of three defeats on the bounce. After opening the scoring in the first half they had to cope with a good deal of Dijon pressure. The resistance was down in part to their goalkeeper and captain Leroy. He was making his 100th appearance for Tours and his performance, often dealing capably with the high balls in the area, will have no doubt please the Petr Cech lookalike. This result tightens the chasing pack as Tours in eight are two points behind Dijon in fourth.

There was a southern derby in France on Friday when Nimes went to Arles-Avignon. The game got off to the perfect start when Cissokho went on a surging run down the left flank before squaring the ball for his team mate Benmeziane to fire home. Although Nimes would go on to concede and thus share the points it would be a considered a point gained for the away side. What’s more it is another draw for Arles to add to their collection, they take the lead with 11 draws to date.

Caen went to play at Niort on Friday night, a difficult task considering Niort’s invincible streak since the winter break. While the game itself may have finished goalless, there were no shortage of chances of opportunities for both sides. Caen will be happy with a point on the road while Niort may feel somewhat disappointed as they are surprise candidates for promotion, sitting they do four points off the podium.

Brest made the long trip to Corsica to play CA Bastia in a match they could not really afford anything other than the three points. Things are tight at the bottom and Brest are in a very precarious situation. Even playing a side seemingly as doomed as CA Bastia this victory should be seen as an impressive one.

Chateauroux went up to Le Havre on the back of three straight wins which has really helped their bid for survival. The played a Le Havre side who have had serious troubles playing in front of their own fans of late; perhaps due to the poor state of the pitch. Chateauroux resisted Le Havre’s numerous attacks and will be content to continue their unbeaten run.

The oft spout dictum about champions is that the key is to win when not playing well. And for a long time on Saturday lunchtime Metz did not look like securing the victory. Things just were not falling for the Metz attackers, chances went a begging. The Clermont defence did its best to foil the attackers yet the resistance would not last the distance. In the 76th minute Diafra Sakho finally took a chance and afforded Metz the win.

The award for comedy own goal of the week goes to Benjamin Jeannot whose air kick and sliced shot would have made Kolo Toure proud. The assist from which that own goal arrived came from a curling corner from Franco-Tunisian winger Ben Khalfallah who was a January arrival from Bordeaux. Troyes reached the semi-fianls of the French League Cup and perhaps their cup exploits have left them struggling in the league, they are stuck in mid table unable to forge a promotion bid.

In an entertaining match at Creteil on Monday night that saw plenty of goal mouth action. The two Creteil goals came from the boot of Jean-Michel Lessage allowing Cheikh Ndoye to net a brace. While it might not have been enough for Creteil to take anything from the game it is a valiant effort for a promoted side to compete well against a strong promotion chasing Lens side. Creteil sit comfortably in twelfth place.

Turning back the clock this season for Lens is attacker Ljuboja. Monday night saw him deliver a goal and an assist for his side. It was an important win for Lens as they saw both Metz and Angers secure three points before Lens themselves took to the field in the Monday night game. The 35 year old has five goals and four assists to his name this season.

No doubt what the game of the weekend was and it took place at Laval of all places. A match that ebbed and flowed with goals flying in at both ends. This was mainly down to Diarra and his poacher’s instinct. His first goal he reacted first to a deflected pass to poke it home the second he found himself completely alone in the area after a cross cum shot came to him and he did the rest. If the first two strikes had been close range efforts the third was anything but; a first time curled effort from the edge of the box hitting the inside of the post before nestling into the net on the other side. The win gives Istres a little bit of breathing space moving up to the lofty heights of thirteenth, however for Laval things looks are looking worse with every passing week.

On loan from Lyon Mohamed Yattara has been a revelation for SCO Angers, it was Yattara who made the difference for Angers on Friday at Auxerre. Two goals in a fifteen minute spell either side of half-time sealed the three points for Angers. The first goal came from neat interplay between Yattara and Richard Socrier. It was Socrier once more who laid on Yattara’s second allowing the Guinean striker to pass the ball into the net for 2-0. Angers are keeping pace at the top of the league and with a game in hand they could go level on points with Metz soon enough.