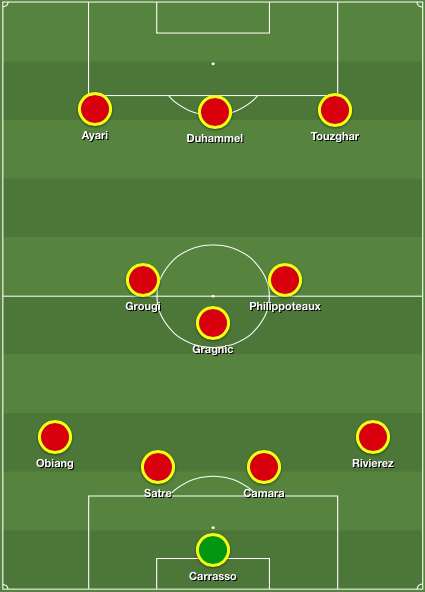 The highlight of the week’s fixtures was undoubtedly the Nancy/Metz derby. After Metz thumped Nancy 3-0 in the reverse fixture earlier in the season, Nancy were looking to get some revenge on their local rivals. In a match of such importance it was unsurprising to see the tackles flying in from the get-go, the referee certainly had a lot of work to do. Nancy’s in form Jeff Louis looked like it would only be a matter of time before he would receive his second yellow, it duly arrived in the 25th minute. Metz opened the scoring just before half time and were able to be prevent Nancy from equalising thus sealing a double of their rivals.

Le Havre played down at Istres in a match that the winner could honestly consider themselves  as nearly safe and secure in the division. The loser however may well end up in the long hard battle for survival. It would be the Normandy side that would triumph thanks to a solitary goal from right-back Rivierez who ran on to a long cross before finishing nicely on 37 minutes. Le Havre managed to see out the game to grab the win; Istres’ recent good form comes to end. Istres thus drop to 17th  and are locked in the tightest of relegation battles.

In one of the surprise results of the weekend Nimes put four goals passed Niort. Niort had been in such good form they were threatening to become genuine promotion candidates. Nimes were also in relatively decent form themselves and have been trying to fight for safety. They have only been defeated twice since returning from the winter break. They started the match in the best possible fashion when Sartre’s looping header found the net after four minutes.

Friday night saw a team in CA Bastia without a home win all season take on a team with no away wins to their name, surely a classic was in store for the 983 supporters at the Stade Armand Cesari. Evidently, the 0-0 scoreline was simply inevitable. Auxerre  just could not create any clear cut chances and the half chances were easily dealt with by the Corsican defence. While CA Bastia may have resigned themselves to a swift return to the National, Auxerre are dropping like a stone. It may be unthinkable for a team who were playing Champions League football four seasons ago they will need to turn things around quickly to avoid being caught in the very tight relegation battle. They sit one point off the relegation zone.

Chateauroux welcomed Arles-Avignon to the Stade Gaston-Petit on Friday night and were soon in the lead thanks to a lovely strike from Flavien Tait. They then spent most of the game huffing and puffing and just generally missing a whole load of chances. It would take until four minutes before the end to confirm the result when Obiang punished some lax defending the score their second goal of the night. Things are going a lot better for Chateauroux as they edge closer to safety with each point.

Brest took on Laval this week in a relegation battle that neither could contemplate losing for obvious reasons. Laval took the lead after 19 minutes and Brest needed to react. React they did thanks to the long haired Bruno Grougi. On 58 minutes he fired home from the edge of the box before being in the right place at the right time to prod the ball home and thus securing three tremendously valuable points for the Bretons. Brest have a game in hand against Angers to play this week, should they triumph in that match they would climb to the lofty heights of 13th position. Laval however, are beginning to look doomed; seven points from safety.

Football is often about taking the chances when they are  presented to you. Nimes were level at one goal apiece with Niort when Niort defender David Fleurival was adjudged to have denied a clear goal scoring opportunity and was dismissed. The resulting free-kick was dispatched with aplomb by Gragnic and from then on Nimes always looked like winning. Gragnic was offered another chance to exploit when the referee awarded an indirect free kick from just outside the six yard box for a back-pass to the keeper.  And in gloriously old-school fashion Gragnic made it 4-1 and a vital win for Nimes.

Dijon started and finished their match against Creteil well, it was simply the 83 minutes in between Romain Philippoteaux’s two goals that was disappointing. He converted the first chance of the match after four minute and levelled things from the penalty spot on the 87th minute to save a draw. Dijon will need to win this sort of match if they want to catch the three sides on the podium; they are currently four points off Lens in third.

All was looking lost for Caen and Duhammel on Friday night. Clermont had rocked up at the Stade Michel d’Ornano and were minutes away from achieving an impressive coup thanks to Yannis Salibur’s impressive strike in the eighth minute. Clermont could not hang on as Duhammel scored a double in the dying embers of the match. The Caen striker is a prolific finisher and came to the rescue for his side. The result brought Caen to fourth in the table and they remain firmly in the promotion-chasing pack.

Angers played Troyes looking to remain on the path for promotion with Troyes standing in their way. Things got off to the best possible start when Ayari’s first time finish gave Angers the lead after just five minutes. However Troyes would get themselves back into the match when a defensive error left Ghislain Gimbert to equalise. Angers go to Brest to play their game in hand this week and a win could extent the gap over Caen in fourth to seven points. Troyes meanwhile look anchored in mid-table after a promising first half of the season.

Lens looked in trouble for seventy minutes at home to Tours being lead as they were two goals to none after two goals in the first 39 minutes from the away side. The 35,000 plus crowd had not come out on a chilly Monday night to be disappointed. Eventually the home side would react thanks to a three-minute spell when Lens salvaged the point. Yoan Touzghar got one back before veteran Ljuboja equalised from the penalty spot. Lens remain four points clear in third looking to return to Ligue 1.