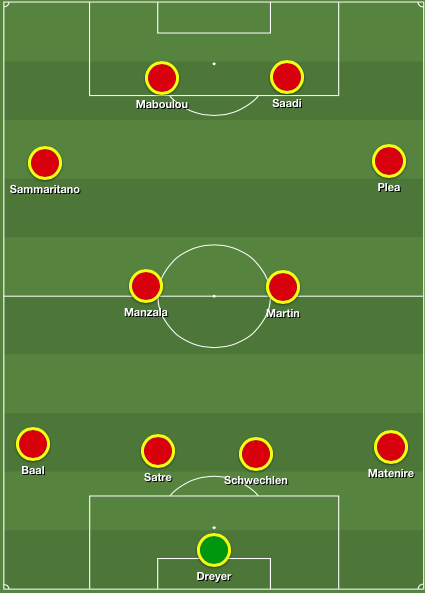 After a two week absence, Ligue 2 columnist Simon Scutt returns with the eleven players he was most impressed by in the twenty-ninth game week of France second tier action:

Troyes secured an important victory over Dijon on Friday night winning by two goals to zero. The two teams have fluctuated up and down the table in recent months. Both sides may well have to concede that their relative chances of promotion are slim, finding themselves five points off the podium respectively.

The Metz machine keeps going. Another three points, another clean sheet to add to their season’s tally. A one-nil win against Brest on Monday night, thanks to a Yeni Ngbakoto goal. Ngbakoto probably should have scored early when Metanire’s early cross landed on a plate for him only to put it wide. Promotion looks more an more inevitable for Metz sitting as they do, eleven points ahead of fourth. Brest meanwhile are faring somewhat better now five points from the relegation places.

Tours defeated CA Bastia thanks to Andy Delort’s thirteenth goal of the season.  A somewhat routine victory for Tours against ten man CA Bastia side who have been all but guaranteed relegation candidates for the lion’s share of the season. While, Tours now find thsmelves two points off the podium. Should Angers’ form continue to dip there may be an opening for other teams to challenge for promotion.

Nimes welcomed Lens to the south of France and an entertaining spectacle ensued. Nimes took the lead after just six minutes and would go on to repeat the feat on two further occasions, only to be pegged back on each occasion. It was Sartre’s bullet header that gave Nimes’ their third goal.

It was only four minutes later when Lens were level as Baal deflected shot equalised for the third and final time. Baal exchanged neat passes with Edgar Salli on the edge of the box before his shot found the net. This result gives Lens a five point gap over third and six points off fourth spot. Nimes, meanwhile, find themselves in the relegation zone albeit

Caen vs Chateauroux proved a busy night for the referee. The first half was a fairly simple ride for the officials, just the simple penalty award to give. Whereas after just five minutes the officials took centre stage, dismissing the Caen goal-scorer Duhammel for a violent act. The main action was to come Maboulou rose to meet Chamed’s free-kick and then the ball found its way into the net.  Caen were incensed, Maboulou had quite literally palmed the ball into the net. Much toing and froing ensued from the officials before eventually the goal was awarded.

Niort continue to be the success story of 2014 as they have now climbed onto the podium. They did this by defeating rivals for promotion Angers, they led at half time through an exceptional strike from Emilano Sala. They would be pegged back in the second half before grabbing a late goal through midfield  maestro Martin. An unbelievable goal, a free-kick from some forty yards that beat everyone before finding the net. Angers drop out of the promotion places, Niort replace them.

One team in dire straits going into this week’s game was Auxerre they travelled to Creteil who, themselves, were dropping down the table alarmingly. For Sammaritano it was a case of ‘anything you can do, I can do better’ to his team-mate Plea. The ball fell to Sammaritano some twenty five yards out, his lofted shot flew into the top corner. Two top class goals for Auxerre, the question must be asked where this quality has been all season.

The on-loan Lyon winger scored his first Auxerre goal at Creteil on Friday and some goal it was too.  Having taken the defender on one side, then the other, he proceeded to smash the ball into the roof of the net from the by-line.  The result gives Auxerre some breathing space in the table with nine games remaining. Creteil have fallen to sixteenth in the table, just two points off the drop-zone.

Sometimes it takes something special to get a team out of trouble. Manzala proved this for Le Havre this week. His cross-volley curled into the corner of the net in the 94th minute saving a point against Laval. The result will be disappointing for both sides in retrospect, Laval in dire need of points to stave off relegation. Le Havre will be disappointed at their gift of a goal to the away side, Toure’s clumsy and needless own goal was hardly the start the Normandy side had planned.

With one win in their last ten games Clermont have got somewhat stuck and stagnated in mid-table. They took on Nancy this week who remain in the chasing pack but are running out of games to sustain a serious challenge. It would be Clermont who took the three points after Saadi’s looping header found the net on the stroke of half time.