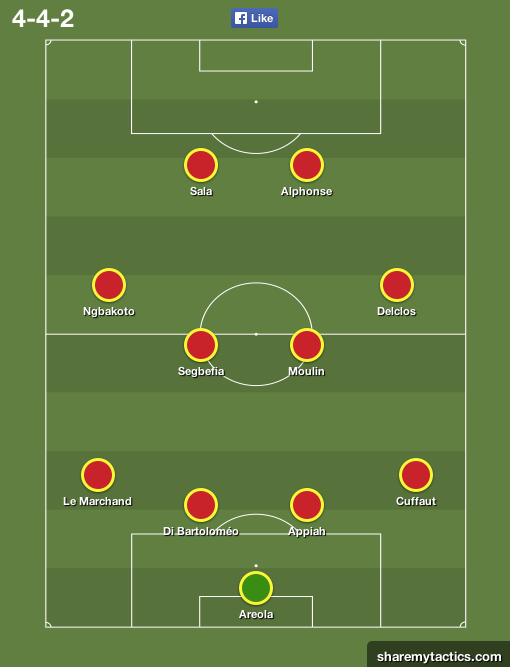 After a one week absence, Ligue 2 columnist Simon Scutt returns with the eleven players he was most impressed by in the thirty-first game week of France second tier action:

Normally, a clean sheet is a perquisite for goalkeepers in Team of the Week however given Areola’s performance at Caen on Saturday one can make an exception. The on-loan PSG stopper made a sucession of fantastic parries and stops. Caen kept hitting Lens on the counter and were it not for Areola there would have been a much different score-line. The result means Lens stay on the podium and will need to improve if they are to return to the big time.

The chasing pack for promotion contains many teams with legitmate hopes of promotion and given Angers’ struggles many teams would like to exploit said struggles. Nancy did their chances no harm with an important away win at Nimes, keeping a clean sheet in the process. The result does heap problems on Nimes, although Nimes do have a game in hand over their relegation threatened rivals.

The Caen victory over Lens did the Normandy side the world of good they look the best placed of the three teams on 47 points as they have a game in hand to play against relegation threatened Nimes. Appiah pulled off the remarkable feat of blocking a shot that looked for all the world like it would be the Lens equaliser. He lunged to block the shot on the goal-line. Promotion runs are all about timing your run and Caen may just be in the right groove at the moment.

Seventeenth took on eighteenth at Creteil on Friday when Laval when to Creteil. In such an crucial match it is imperative to begin well. This is something that the home side very much did whereas Laval most certainly did not. Two goals in the first five minutes put pay to any hope of a Laval win. The second goal was impressively hooked home by Di Bartoloméo from a corner. Two in five would become three in nineteen minutes and by the end Creteil would have four and vitally the three points. Things do not look good for Laval.

There are a lot of teams in the division with something  to play for be it promotion or survival. For CA Bastia hope seems to have long gone as they are stranded at the foot of the table. It has however liberated them somewhat they seem to be playing a lot better without the pressure. Le Havre also are very much playing out the season without too much hope of achieving anything of note safe in midtable as they are. They achieved a routine win over the Corsicans played out in front of a sparse crowd in Normandy.

Arles-Avignon secured a big win on Friday night in beating a depleted Angers side three nil. This was primarily down to Jordi Delclos after scoring a brace. The first saw him running on to a through ball and firing the ball through the goalkeeper’s legs into. His second goal had him reacting the quickest to his own penalty miss in order to tap the ball home. Arles sit assuredly in mid-table while this setback keeps Angers’ promotion bid in check. Now very much in the chasing pack they are no longer the pacesetters.

Things are going marginally better for Auxerre in that they are three points off the drop-zone and they took a point from Tours on Friday. Yet it could have been so different when Prince Segbefia headed home from a corner to make it 2-1 to the Burgundy team. Yet they would go on to draw only taking the one point. Tours meanwhile sit in seventh still harbouring ambitions of a promotion even it does look slightly unlikely these days.

Clermont secured a big result in their quest to win Ligue 2’s other prize; the side with the most draws. They currently sit on thirteen just one behind leaders Le Havre. Now with a few stuck in the purgatory of mid-table we could see some significant movement in this area between now and the end of the season.

Leaders Metz seem to be all but assured of playing Ligue 1 football next season however Istres nearly spoiled their party on Monday night when they took the lead. These things were never meant to last though as Yeni Ngbakoto turned things round for the home team; his freekick beat everyone on its way through to equalise. His second came from a spot of head-tennis in the Istres’ box he headed home to give his side the win. Istres are precariously placed above the drop-zone just the two point safety cushion for Istres.

The Niort fairytale goes on.  They are third three points clear of fourth and continue to dream of Ligue 1 football. They opened the scoring in the 26th minute when Emilano Sala was felled in the box before picking himself up and transforming the penalty himself. The man on-loan from Bordeaux has been an astute recruit for Niort; this was his twelfth goal of the season. They would double their lead six minutes later and that would be that, another win.

The match between Troyes and Brest saw one team that is in pretty irregular form winning a match in two against the visitors who are in good form and are fighting to save their status in the league. Brest took lead almost immediately through Bruno Grougi whose shot was palmed into the net by the hapless Troyes keeper who would parry the ball straight at Alphonse for Brest’s second and decisive goal. A result that gives Brest the illusive forty point mark and they can begin to feel safe.