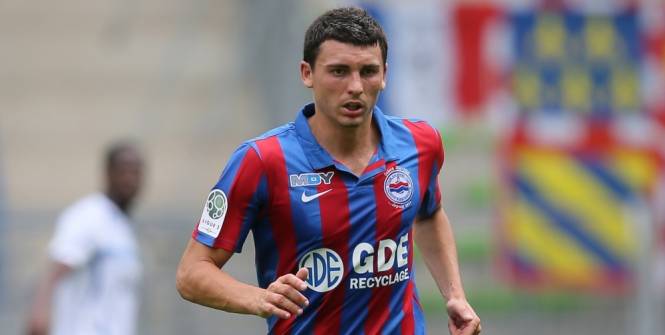 Simon Scutt picks his best XI from the latest round of Ligue 2 action:

Crisis? What crisis? It had looked very bleak for Brest not too long ago but now after a series of victories puts them sitting pretty in 11th spot in the table. They saw off Arles-Avignon on Friday night with a two nil victory which allows them to consider themselves safe in Ligue 2. A match that turned on a couple of refereeing decisions. The red card that saw  Arles-Avignon reduced to ten men and then the penalty that was awarded in Brest’s favour five minutes later were both justified and led to a Brest win. While hardly the objective going into the season the fact that they live to fight another day will still be some consolation for the Bretons now they can begin to plan for next season.

Angers have hit a worrying blip in their quest for promotion having spent large portions of the season on the podium, they needed to arrest that slump quick-smart against Le Havre on Friday. Le Havre have not all that much to play for in their remaining games so in some ways were ideal opponents for Angers who saw them off with a relative amount of ease in winning one goal to nil. Looking at the table Angers are still right in the pursuit for promotion, just they will have to hold off a number of other teams.

Twentieth played nineteenth in Corsica on Friday night and a fairly uninspiring game ensued. It finish scoreless a result that helps precisely neither of the teams. CA Bastia are not mathematically down yet, that could become reality next week, while Nimes are in dire need of points and will see this game as an opportunity wasted. Nimes were made to defend in the first half and had to be on their guard to see off a CA Bastia team with little to no pressure upon them.

The game between CA Bastia and Nimes can have the cliché of a game of two halves applied to it. The first period saw the Corsicans attacking and almost taking the lead when they hit the crossbar.  The opposite would be the case when Nimes attacked more in the second period, coming close on a number of occasions. The home side had won their previous two home games and are enjoying the life of condemned men.

This year could see two traditional and historic clubs in French football return to Ligue 1 after a number of years away. Much like FC Nantes being promoted back last season there is a groundswell of feeling and opinion in favour of clubs such as FC Metz and RC Lens. It was all there to see on Saturday when over 37,000 people flocked to see Lens take on Niort. Lens who had slipped up the previous week saw off the difficult challenged of in-form Niort and keeping a clean sheet in the process.

Creteil secured a vital victory on Friday in defeating Tours away from home by a score of 2-1 . Things began well for Creteil when after only a quarter of an hour they found themselves in the lead. This was due a powerful long-range free kick from Jean Michel Lesage evaded everyone in the Tours’ penalty area and nestled into the net. The result leaves Creteil edging towards safety and would all but kybosh any remaining hopes of promotion Tours had of promotion.

Saturday night saw a match between two sides very much hoping to find themselves in Ligue 1 next season. Lens looking to make a long awaited return to the big time whilst Niort have been riding the crest of a wave and find themselves a final push away from a remarkable promotion. It would be Lens who would triumph in the sunshine of the north of France thanks to Nomenjarahary’s headed goal on 59 minutes. The result puts Lens six points clear of the chasing pack with just six games left to play.

It was Le Synthetique on Friday night when Nancy went to play on Chatearoux’s synthetic pitch looking to claim more points in the hunt for promotion. Chateauroux meanwhile could yet find themselves dragged into the fight at the bottom of the table. It was all a bit routine for Nancy and when Jeff Louis superb strike hit the net it made it three goals to nil. Louis has turned in quality performances this season and is one the standout talents in the division. Nancy much like Angers and Niort will be hoping Caen mess things up when their game in hand comes around in order for them to steal a march into Ligue 1.

Clermont went to Auxerre on Friday night sitting comfortably in tenth place, a position the home side would give anything to occupy right now. The game should, if anything, have been a decent opportunity for Auxerre to chalk up a precious win but it was no to be the case as the visions in luminous pink of Clermont Foot took all the points. The opening goal was saw some excellent technique from Saadi who delicately gave his side the lead after 33 minutes. The result leaves Auxerre struggling in seventeenth.

Just where would Laval be without Christian Bekemenga? Already relegated is probably the correct response. Eighteen goals this season for a side that has spent nigh-on the whole season battling relegation. He was again the Laval saviour on Friday hitting a brace to defeat a depleted Troyes side. The three points put laval to the lofty hides of sixteenth in the table. It looks increasingly like two of Auxerre, Nimes, Istres and Laval will join CA Bastia in experiencing relegation.

In what was just about the game of the weekend Mathieu Duhamel helped his Caen side claim another vital win in their attempts to get out of Ligue 2 and back to the top tier. Duhamel finished with aplomb to give the Normans the lead before he would see his side pegged back to trail 2-1 at the pause. On the hour it would be all-square with the final thirty minutes seeing a large number of chances for either side. Finally, it would be the Caen talisman who would seal the win for Caen three minutes from the end with a trademark finish. Eighteen goals this season and given Niort’s slip up Caen now are in the driving seat to take that third promotion slot given they have a game in hand of the other teams on a similar number of points.