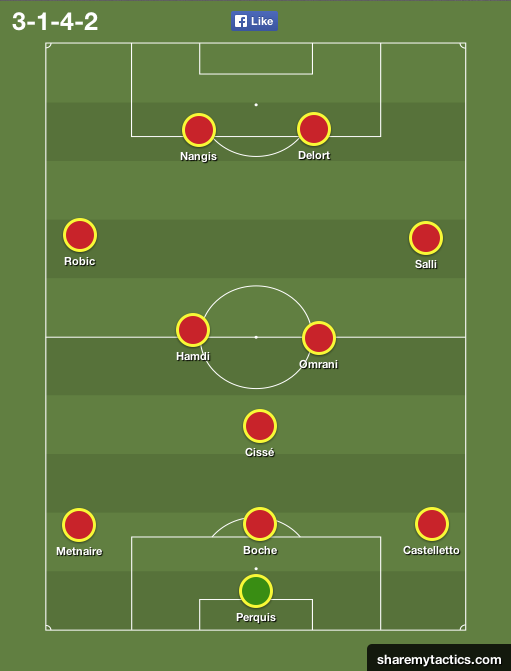 With just 2 weeks to go in the Ligue 2 season, and many positions up for grabs, individual players can be the difference between promotion to Ligue 1 or relegation. Simon Scutt looks at the standout performers in Week 36 of the Ligue 2 season:

On a typically Breton night in Brest Caen did the business in winning 1-0; a massive result in the context of promotion. Caen scored earlier and thanks to some heroics in the Caen goal from keeper Perquis held on to take the three points. He made a series of great saves and parries in the difficult conditions to help his team to the win.

Metz is Ligue 2 Champions 2013-2014. They were crowned after they defeated Troyes 1-0 away from home on Tuesday. Eduardo’s header the only goal of the game was enough to take all the points. Troyes pushed hard looking to end their own season on a high and the Metz defence, as it has all season, stood strong.

Nimes went into this game very much in relegation trouble. Equal on points with Auxerre and Istres both of whom are in the drop-zone. They would proceed to go a goal down in the first twenty minutes at Angers before Bache’s header began the revival. Now they sit out of the relegation zone on goal difference with the protracted saga with regard to their game in hand at an end; they play Caen on Tuesday 13th. Another away win?

Auxerre were playing in the Champions League in 2010 now they are staring down the barrel of third tier football. They are eighteenth on goal difference after their win against Le Havre on Tuesday. They did not go into the game in any sort of form; they had lost their last four games without scoring a single goal. A lively chance-packed first half gave way to goals in the second half. Auxerre may have ridden their luck as Le Havre missed a lot of chances until Auxerre opened the scoring on 51 minutes. They would double their lead when Castelletto stepped up to deliver the assist for Auxerre’s second goal.

Dijon maintained their strong home record with a win against Chateauroux. It has been their record away from home that has cost them an opportunity to mount a genuine promotion challenge. Ousseynou Cissé opened the scoring in the second half when he headed home his third goal of the season from a corner.

Clermont travelled to Corsica with precious little to play for but still would be looking to throw forward to next season with a good end to the season. They began this game in good form when Hamdi went on a mazy run through the CAB defence before crossing expertly for Saadi to smash home from close range.

It was a case of ‘anything you can do’ for two of the likely to be promoted teams on Tuesday night when Lens matched Caen’s 6-1 demolition of CA Bastia with a thumping result of their own at Istres. The result puts Lens within a positive result of a return to Ligue 1. The result may just be the result that condemns Istres to relegation. They sit three points off safety with a noticeably worse goal difference.

The great escape? Laval attained the mythical forty points total on Tuesday and are edging ever closer to safety.  Antony Robic’s second half finish means Laval join an elite group teams to have defeated Nancy on their own ground. An impressive victory that will probably be cheered equally in Caen and Lens as the defeat for Nancy means that the champagne is on ice for both. Laval will not give up anything in the two remaining games to ensure a most remarkable of escapes.

Nimes did themselves the power of good with a fantastic win at Angers on Tuesday.  Omrani scoring a brace that secured crucial three points against a side that were promotion chasing not too long ago. The first of his goals coming from a cross that he went and subsequently bundled home from close range just before the break. The second a much more skilful effort, linking up well with Ogounbiyi to work the before past the Angers defence before Omrani slotted home nicely. Three vital points for Nimes.

Caen survived having to play twice in four days with a solid win away at Brest. Having swatted aside CA Bastia (6-1 on Friday) they showed there are several sides to this Caen side with an accomplished away win. Lenny Nangis scored after just three minutes in Brittany and the Normans saw out the game to make it maximum points taking them to the brink of promotion.

Andy Delort underlined his credentials as one of Ligue 2’s outstanding talents. Coming off the back of a brilliant 2014 in which he has scored thirteen goals, he was at it again on Tuesday scoring the Tours’ equaliser. It was his twentieth of the season to go with his eight assists making him the most prolific player in the division in that respect. Delort will surely be one the most sought after players on the summer’s transfer market.

David Ospina set to walk away from Les Aiglons

The World Cup Question: The Defence: What Didier Deschamps’ France Squad Will Likely Look Like