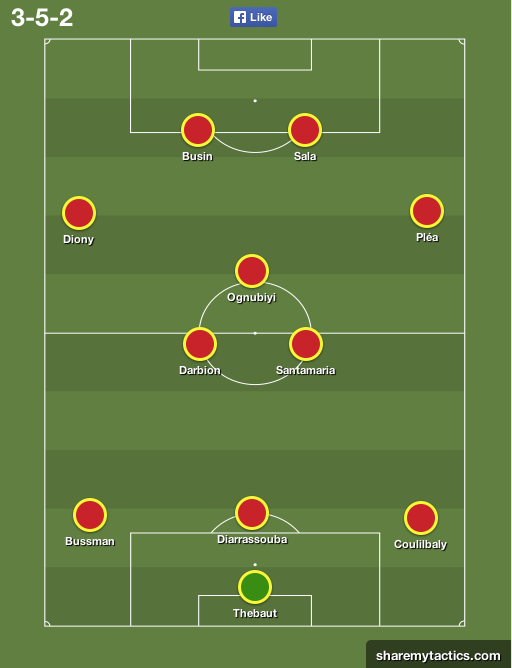 The Ligue 2 season is coming to a close, with just one game left, but there is still so much to play for. Simon Scutt looks at the top 11 performers from Week 37 of the Ligue 2 season:

What a turnaround for Alex Dupont’s side, staring down the barrel of relegation in January they assured their place in the top half of the classement with a mightily impressive win over Lens at the Bolleart. Helping to spoil the promotion party was Thebaut and his defence, managing to keep the Lens attack at bay whilst going on to nick a winner in the second half.

Metz continues to breeze through the end of season without a care in the world. A first minute goal set the tone for a routine victory over Le Havre on Friday. There would be opportunities for standout performers Yeni Ngbakoto and Diafra Sakho to add to their respective goal tallies for the season as well. Bussman setting up Metz’s second goal and helped his defensive teammates keep yet another clean sheet. A good night’s work all round. What’s more, Metz were presented with the Ligue 2 champion’s trophy at the end to mass celebration. Ligue 1 awaits.

Creteil look to be ending their season as mostly they have since august, that’s to say serenely living in mid-table. There was a poor run in march/April which was arrested swiftly. Their final away trip proved successful as they defeated Chateauroux. This result was achieved with two goals in the final five minutes of normal time. What this does do is to plunge Chateauroux into the relegation zone at almost the worst possible time. Other sides’ results combined with a lack of victories could yet send Chateauroux down to the third tier.

Brest rocked up at Lens in plenty of confidence having only been beaten twice in their last fifteen encounters, notching up ten wins in that time. They took on a Lens side gripped by promotion nerves with a sketchy home record.  Thus a Brest side with the pressure off was able to overcome the side from the north-east.  Lens will likely only require a draw from their final match to go up only goal difference and they are aided in their quest by the fact they take on already relegated CA Bastia in their final game. Brest must be wondering where this form was come the first half of the season.

Former FC Nantes midfielder Darbion put in a great showing for ESTAC at Clermont on Friday night, hitting a brace either side of a Corentin Jean strike. His Troyes side have been unpredictability personified this season. They will need to find some consistency next season if they are to improve on their tenth place that they currently occupy.

Seventeenth played fifteenth on Friday when Laval travelled down to Nimes. After ninety minutes and a 2-1 victory for the home side both sides ended up swapping positions in the table. Thus a nervy final week awaits Laval as they look to remain in the division. Ogunbiyi opened the scoring for the side from the south only his second of the season yet it could prove to be tremendously important in the quest for survival.

Caen, just like Lens, required a win from their home games on Friday to seal promotion. However neither of their opponents had read the script as Tours matched Brest’s achievement in spoiling the party. Tours opened the scoring through youngster Santamaria who set the ball rolling on Tours’ way to an impressive if not surprising win at Caen. Not surprising as Tours have spent much of the season in the top part of the table, spending a significant period of time looking like promotion candidates before falling away in the spring.

The on-loan Lyon wide-man has been something of a mainstay in the starting eleven for struggling Auxerre since his arrival in January, looking incisive and tricky on the wing. He was in inspired form at Arles-Avignon this week opening the scoring before setting up his team-mate Sammaritano on the other flank for the goal that secured the three points. They will now head into the final match of the season knowing that a point will, in all likelihood, keep them in the division next season. A horror-show of a season that Auxerre will surely want to put behind them and get back to the challenge of getting back to Ligue 1 next time around.

Dijon delivered the knockout blow to Istres and thus condemned them to the National. They have conceded thirteen goals in the last three games. Not so much as going down fighting but going out with a whimper. Dijon were on the front foot from the get-go having raced into a three nil lead after not even forty minutes. Diony was to the fore as he hit a brace within the first twelve minutes, making that three in his last two appearances for Dijon. If Nimes pull off a surprise at Caen, Dijon could yet have a big say in the promotion race too as they host Caen on the final day.

Picture the scene, you are an eighteen year old footballer with fourteen minutes of professional experience to your name and at half time in a match that could prove crucial in your hopes for promotion your manager summons you and tells you that you will be coming on for the second half. How do you react? Clam up? Stress out? No, you open the scoring after less than two minutes of the second half. That is how you react. This is exactly what happened to Alexis Busin on Friday against Angers, setting his Nancy side on the road to a 3-1 win. That result coupled with Lens and Caen’s slips could yet see Nancy sneak a promotion with further slip ups. A remarkable home debut.

Even if the Niort fairytale never came to pass, it can be said for certain that they have enjoyed a spectacular second half of the season. They have accrued 35 points since the winter break, the second best in the division. They brought down their season in front of their own fans against already-down CA Bastia on Friday night. On paper a sure-fire three points for Niort, yet of course football is not played on paper. CA Bastia held the lead until nine minutes from time when super striker Sala came to the rescue. That was Sala’s seventeenth goal of the season, a large part of the Niort success has been Sala’s prolific nature.