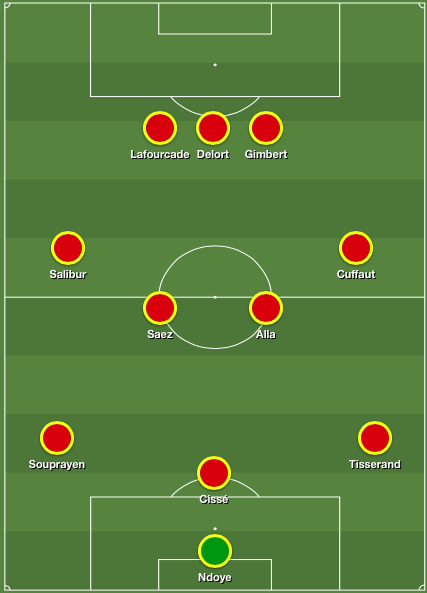 Ligue 2 columnist Simon Scutt presents you with his best XI from all of France’s 2nd tier footballing action from the twenty-seventh round of this season:

Creteil vs Brest was hardly a match for the purists, the first half especially amounted to very little in the way of chances for either side. However, the two teams woke up in the second half as perhaps they felt equally that victory was there for the taking. Brest had several decent chances that were stopped well by Ndoye in the Creteil goal. Creteil are edging towards safety, an impressive achievement for a newly promoted side. The point keeps Brest outside the drop-zone, if only on goal difference.

The Burgundy derby had drama abound with Dijon equalising in the last minute having almost thrown away the lead in the most improbable fashion. It began very well when Souprayen’s cross-shot found the corner of the net after 11 minutes. They held the lead until the 76th minute when John Gastien got in the way of a clearance and the abll rebounded into the Dijon net. Things would go from bad to worse for Gastien when his scuffed goal-line clearance from a corner bounced over the line. Two own goals making it into a miserable evening for Gastien. Dijon managed to rescue a point in the 90th minute. A truly madcap end to the game.

Scoring that goal that salvaged a point for Dijon whilst simultaneously breaking Auxerre fans’ collective hearts and casting doubt over the future of Auxerre manager Bernand Casoni (he would live to manager another day) was centre-back Ousseynou Cissé. His looping header may have recovered a point but Dijon now are a part of a four-team group three points behind the top three. Auxerre meanwhile still sit uncomfortably close to the bottom three; just a point and goal difference from 18th place.

The biggest game of the weekend took place on a bright Saturday afternoon in northern France. It saw leaders Metz welcome third placed Lens to the Stade Saint Symphorien. Metz boasted an unbeaten record at home thus far this week going into this match yet Lens had been impressive away from home in 2014. So it was that the Metz’s home record would come to an end when on-loan Marcel Tisserand headed home in the 69th minute. This result puts Lens within three points of Metz as they set their sights on a return to the big-time.

Clermont took a big step towards remaining in Ligue 2 next season when they defeated Nimes at home. They had Salibur to thank as his penalty secured the three points. He nearly doubled his money when his mazy run then shot before hitting the inside of the post. The game ended in a lively end to end finish as both sides looked for a goal. Nimes will look nervously over their shoulders at the drop-zone following this defeat. Clermont sit 11th and are slowly pulling themselves clear.

A Normand derby that took place amid a festival of pyrotechnics and smoke covering the pitch at Le Havre’s Stade Oceane. The two sides have two very different objectives for the remainder of the season for Le Havre it is to assure safety as soon as possible whereas Caen are looking to climb up on to the podium. Caen were soon behind when Alexandre Bonnet’s deflected shot found the net after a quarter of an hour. This was then rectified by Jose Saez’s thunderous and high-quality shot from the edge of the box to level things up. It would finish a goal apiece; a result that does nothing really for either side.

Nineteenth played twentieth on Friday as Laval took on CA Bastia, while the Corsicans are essentially playing for pride only given their meagre points total. Laval meanwhile will have to keep fighting to avoid the drop. Things started perfectly for the home side as, right from the kick-off, they obtained a penalty kick. Easily converted by Hassane Alla to set Laval on their way. They would double their lead when Christian Bekamenga was presented with the easiest of opportunities after a defensive gaff. Laval seal a crucial win, even they face a daunting task to survive.

Nancy thought they had squandered a victory down at Arles-Avignon when they were pegged back in the 86th minute. But Nancy proved there was more to them than that as Cuffaut cut into the box in the 91st minute to fire across the goal-mouth and into the net. The result should go some way to help them get over their derby defeat to Metz the week previous. For Arles-Avignon it was their first home defeat of the season.

After being properly done at Nimes last week (4-1) Niort, who had been the in-form team in the league, entertained Chateauroux on Friday and it was a return to form for the side in blue. Both Niort strikers found the net twice each, the pick of the goals being Lafourcade’s first coming from a prepared free-kick routine that caught Chateauroux completely unaware. Niort take outright fourth place and sit two points behind Angers albeit having played a game more.

When in a relegation battle one thing you really could avoid is gifting the opposition goals which is the exact crime Istres committed against Troyes on Friday. Within three minutes Troyes were ahead after Jerome Leroy’s back-pass let Gimbert through on goal to finish nicely. Then, on the stroke of half-time, goalkeeper Romain Lejeune dropped a simple ball over his line to give the lead back to the home side. Troyes would go on to hit two further goals and sealing a simple victory. Troyes maybe running out of games to mount a serious promotion charge but victories like this will help them gain momentum. Istres stay in the drop-zone and will want to stop gifting opposition goals as they did at Troyes.

A Loire valley derby between Tours and Angers took place Monday night in front of a lively crowd in Tours. They were treated to a lively game, the highlight of which being the two goals scored by Tours’ striker Andy Delort. The first coming off neat interplay between Delort and Youssef Adnane before Delort smashed home from the edge of the box. The second was a really pearl. Neat passing on the edge of the box before Delort, flicked the ball up thus beating the defender before volleying home from twenty yards. A sublime goal all in all. Angers’ first league defeat since mid-December should keep the chasing pack interested for a little while longer.