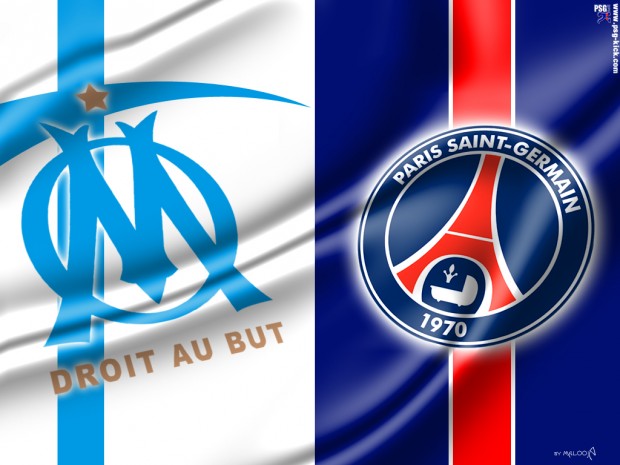 22:00: Well, that was a mightily impressive performance from PSG, who are now 8 points clear at the top of Ligue 1, and it is their title to lose. Marseille on the other hand are now 5 points from 4th place, and they need to bounce back in their next Ligue 1 game. Anyhow, after a thoroughly entertaining ‘Le Classique,’ it is time for me to say goodbye. Until next time, Au Revoir!

21:52: Disallowed goal: Cavani is denied a second as he is given offside. Close but fair decision.

21:51: Ole’s going around the ground now for every PSG pass. We are into the two minutes of added time, and the next action will probably be the full time whistle.

21:47: Substitution: Yohan Cabaye is on now in place of Blaise Matuidi, who had a very impressive game for PSG. The crowd are in delirium, and it looks like it is as good as game over.

21:45: Close: Marseille have hit the post! A corner is headed towards goal, but a combination of Verratti and the post see the ball cleared!

21:43: Sirigu makes his first notable save of the second half, as he gets down low well to stop a Valbuena shot that was heading into the bottom corner. Marseille have been uninspired in this second period.

21:41: GOAL: PSG 2-0 Marseille (Cavani). I said substations would be crucial! Cavani doubles his side’s lead, as he finishes a fantastic cross from Van der Wiel with a powerful header. PSG now have the game all but won, barring a stunning comeback from Marseille. Cabaye is about to come on…

21:38: Comical moment now at the Parc des Princes as Gignac blazes a 30 yard effort into row Z, and the camera pans to Teddy Riner, who can barely contain his laughter…

21:35: Marseille are trying to exert some more pressure now, as they have a succession of corners, but the deliveries are generally poor and PSG clear with ease. They need some magic in the final third to break down this defence.

21:33: Ouch: Alex is flattened as Imbula’s shot hits him flush in the face. He is up soon enough though and is back to trying to prevent Marseille from getting an equaliser. Marseille are starting to run out of time… can they grab the all important goal?

21:31: Substitution: I talked before the game about how substitutions could be crucial, and PSG make their first as Cavani comes on in place of Lavezzi.

21:29: Close: Brilliant chance for PSG to put the game to bed! Verratti with some magic feet gets away from 3 players, and Ibra then feeds Van der Wiel down the right, but his shot is blocked into the side netting by a sliding Marseille player.

21:26: Free kick in a good position for Ibra… but it is straight into the wall and Marseille are able to clear. This game could still go either way.

21:24: Marseille are now beginning to come back to life little bit, as they enjoy a good spell of possession. Imbula looks to have made a difference since coming on, and Valbuena is seeing much more of the ball than before. PSG still looking dangerous though, as Mendes is booked for chopping down Lavezzi as he looked to break.

21:21: Substitution: Imbula comes on for the ineffective Thauvin as Marseille try to make something happen. PSG now just keeping the ball around midfield, waiting for Marseille to press and leave spaces in behind to exploit. Marseille just need to see out the next 5 or so minutes, and then try and get an equaliser.

21:18: Marseille are beginning to really struggle to contain this PSG side now. Lucas displays some stunning play to set up Ibrahimovic, but his cross is too high and Marseille can clear momentarily.

21:16: Close: Almost another for PSG! Ibrahimovic nutmegs Morel with ease on the edge of the box, but Lucas’ subsequent shot is well blocked by a sliding Romao.

21:13: That goal forces Marseille to come out of their shell now. In fact, they are currently enjoying a good spell, as PSG are now happy to sit behind the ball and defend. That assist makes Ibrahimovic the top goalscorer AND assist maker in Ligue 1!

21:10: GOAL: PSG 1-0 Marseille (Maxwell). PSG have the lead! Marseille wanted a foul by Matuidi in the build up, but it is not given. The ball falls to Ibra, who plays a brilliant low through ball to Maxwell, who keeps his cool to finish low under Mandanda.

21:08: PSG starting the second half as they finished the first. They are dominating possession, looking for that opening. Lucas goes into the book though, after a late challenge.

21:00: We are now nearing kick off for the second half of Le Classique. The second half could decide a lot about this season for both sides. A Marseille win could inspire them to achieving European football, while a PSG win would see them all but seal their second consecutive Ligue 1 title.

20:55: So, that was a very entertaining half of Ligue 1 football. Both teams started quickly, as chances were created by both sides. Lavezzi had the game’s first clear chance, as he missed after rounding Mandanda. Lucas then almost scored a divine goal, as he beat 4 Marseille players and Mandanda, only to see Fanni clear off the line. Marseille managed to hand on until half time, but not without an Ibra chance that could have given PSG the lead. The second half should be a belter.

20:48: Close: PSG really should be 1-0 up! This time it is Ibrahimovic with the chance, as he has a free-ish header just 8 yards from goal, but he can only direct it just wide of the goal, with Mandanda unmoved. PSG may regret these missed opportunities…

20:46: Now it is Matuidi’s turn to go into the book after a studs up challenge on N’Koulou. That was definitely a yellow card at the very least, and Matuidi is perhaps lucky it wasn’t more.

20:44: Le Classique is heating up a little bit now. Motta leaves out a flailing arm, which catches Valbuena in the face, and the Italian is booked by the referee. Nearing half time as we speak.

20:42: Close: PSG have another chance to take the lead! Van der Wiel bursts down the right and delivers a near post cross to Lavezzi, but Fanni does well to get in front of him and clear the danger. Marseille will be happy to get into the break with the score at 0-0.

20:38: Some nice work by Maxwell down the left gives Lavezzi the chance to deliver a cross, but it is just to hard for Matuidi to control and get a shot away. PSG starting to pick up the pace…

20:36: PSG starting to dominate this game now with long spells of possession. Marseille are looking to hit them on the counter, but at the moment both defences look resolute. Half time 10 minutes away.

20:32: Yellow Card: First card of the night so far, as Payet flies in on Van der Wiel as he looked to break. No complaints there from the Marseille man, a yellow card all day long.

20:29: After a period of calm, we have another chance, and it is for Marseille! Valbuena makes a nice run down the left, and his cross-shot has to be saved well by Sirigu, before Gignac blasts over wasteful. The Gignac/Big Mac song blares out at the Parc des Princes.

20:27: As the pace of the game has slowed a little, we have seen a few more nasty challenges flying around. Gignac guilty of the latest one, with his late slide penalised by the referee. Both sides taking a bit of a breather.

20:23: The game has finally calmed a little bit now after a frenetic opening 20 minutes. How the score is still at 0-0 I have no idea, as Lavezzi missed what can only be described as an open goal, and Lucas had his spectacular effort cleared from the line.

20:20: Close: Spectacular! Lucas, who picks up the ball in his own half, shows a tremendous turn of pace to completely take out 4 or 5 Marseille players. He finds himself through on goal, but his chip is cleared off the line by Fanni as it was on the way in! That would have been one of the best goals I had ever seen, but it is somehow still 0-0!

20:17: First crunch tackle of ‘Le Classique,’ as Valbuena goes in late on Motta in midfield. No card for the small Frenchman, and he can probably count himself a little lucky.

20:15: And again, soon after a PSG chance Marseille create one of their own. This time Valbuena is allowed too much space just outside the PSG box, but his shot is a little too high and Sirigu can let it go for a goal kick.

20:13: Close: How are PSG not ahead! Lavezzi takes the ball past Mandanda, and has an open goal, albeit at a tight angle, with Ibra also waiting for the tap in. Lavezzi however can only find the gap between Ibra and the goal, literally anywhere else and it would have been 1-0. Huge let off for Marseille.

20:10: Now Marseille’s turn to get forward, as Fanni bombs down the right and delivers a low cross, only for Sirigu to come diving out and grab the ball well. Most of the action so far is down Marseille’s right

20:08: PSG break with pace for the first time. Lavezzi burns N’Koulou down the left hand side, but the Marseille man does well to block the eventual cross and put it out for a corner. The corner is disappointing though, and is cleared at the near post.

20:06: Strong start from Marseille, who are booed consistently by the whole stadium as they have possession. It’s worth noting how attacking Marseille’s lineup is, with 5 attack minded players in the side and just Romao and the defence who are defensive players by trade. Expect an open game.

20:03: KICK OFF: We are underway in Le Classique! What do the teams have up their sleeves?

19:58: Just two minutes to go until kick-off now, and the players are beginning to emerge from the tunnels. Cracking atmosphere at the Parc des Princes, so let’s hope for a cracking game to go with it! Kick off imminent…

19:53: Strength of the Bench: This game promises to be a tight one – Le Classique matches normally are. So, the substitutions the managers make can be crucial. If we look at the benches, PSG’s boasts Cabaye, Cavani and Pastore, each of whom can have telling impacts on the game, while Marseille’s is not nearly as strong. The 11 players who start in OM shirts will have to do a stellar job tonight.

19:50: Team News: Once again, new signing Cabaye starts on the bench for PSG, who stick with their 4-3-3 formation, with the midfield trio of Verratti, Motta and Matuidi. Marseille set up as expected as well, with a wealth of attacking talent in the likes of Valbuena, Thauvin and Gignac. With the calibre of the attacking forces today, we should (hopefully) see some goals.

19:40: Welcome one and all to a match that will undoubtedly go a long way to deciding matters at the top of the table this season. After Monaco’s loss against St-Etienne a few days ago, PSG now have the chance to open up an 8 point gap at the top. Standing in their way are 5th placed Marseille, who have European aspirations of their own. Let’s get into some team news…