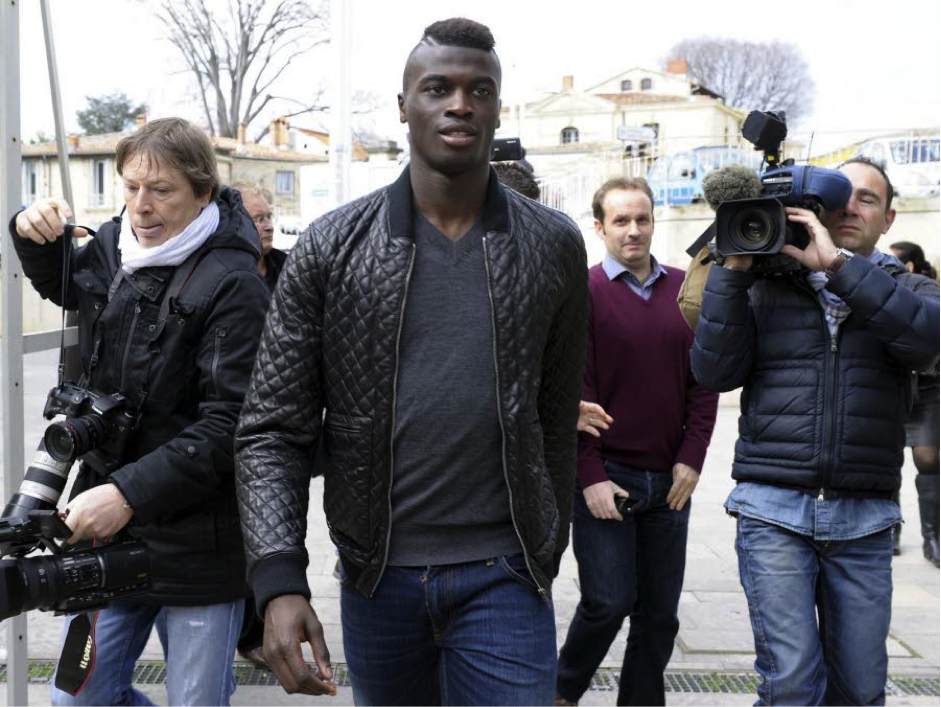 When shocking pictures emerged at the start of February of the wrecked £200,000 Ferrari that AC Milan’s M’Baye Niang had borrowed, raced dangerously through the streets of Montpellier and subsequently crashed into a tree, the resulting media storm was easy to predict. Now, after a frantic few weeks of reports involving court appearances, deleted Twitter comments and varying degrees of support and condemnation for the 19-year-old attacker, the dust is finally beginning to settle and more long-term questions can be asked.

Appearing in court on 24 February, Niang was handed a suspended 18-month jail sentence for the hit and run car accident. Although at the time of the crash the player sent a tweet to his official Twitter account saying that he was not behind the wheel – a claim subsequently picked up upon by French paper Le Parisien – Niang swiftly deleted the post and later admitted to the court that he was indeed the driver, hitting several cars before crashing his car into a tree.

Officially charged with causing unintentional injuries, endangering people’s lives, a hit and run and driving without a licence, the prosecutor had asked for 170 hours of community work but, given the severity of the altercation, the court handed him the suspended sentence instead. Francois Lafont, lawyer for the plaintiffs, said: “It was pure craziness. It´s not just an accident, this is assault. Ten people could have been killed.”

For his part, when asked why he did not stop after hitting the vehicles, Niang simply told the court in Montpellier: “I panicked.” But this declaration of youthful innocence does not come close to forgiving what happened. Indeed, this is not the first time the France U-21 international has been involved in damaging altercations of this nature.

In September 2012, he was stopped by Italian police before reportedly claiming to be AC Milan team-mate Bakaye Traore as he was driving without a licence. Meanwhile, in October of the same year, he was given a 14-month ban from representing France at any level after visiting a Paris nightclub with four other players between the two legs of the U-21 side’s 2013 European Championship playoff.

More recently, however, things were all going so well. After failing to shine during the first half of the season with AC Milan, his parent club accepted an offer from Montpellier in January taking Niang to France on loan for the rest of the season. It was a perfect match – allowing the youngster to escape the intense scrutiny of the San Siro to move back to his home country with promises of regular first team action and the chance to rediscover his best form – and it certainly seemed to be working. With three goals in his first four league appearances for Montpellier – and some excellent performances to match – the youngster was in his element.

Then, the night after scoring in the 4-2 win over Reims – with arguably his best performance for MHSC – came the crash that looks as though it will not only cast a shadow over the rest of the current campaign but perhaps have a lasting impact on his career as a whole. While Niang has continued to feature in the Montpellier starting XI since the incident, his performances have been somewhat indifferent in recent weeks.

However, the reaction from those within Montpellier’s ranks have been understandably forgiving given their reliance on the youngster’s goalscoring exploits. Controversial club president Louis Nicollin summarised the club’s stance perfectly by saying: “I don’t excuse what he did, but we will not punish him ourselves. The important thing is that he will still score us goals.”

But club leniency can only stretch so far and Nicollin went on to suggest that it is now or never for the young star, stating: “I have told him that if he continues like that at 19 years old, he will not always find someone [to fall back on].”

And these sentiments were echoed by Montpellier coach Rolland Courbis who told L’Equipe: “[Niang] is still learning the alphabet,” after explaining to French media that “Niang is 19. He’s just starting his education. It’s a very important period for the future success of a footballer and it’s also a period that is sometimes neglected. He’s had the good fortune to have been picked up by Montpellier.”

In a few short sentences Courbis hit the nail on the head. Niang is at a crucial stage in his career and his current actions can see him treading starkly contrasting paths. Without doubt, the former Caen youngster is rash and reckless, a product of ‘too much, too young’ – a label often attributed to young footballers with perhaps more talent and money than sense – but excuses will soon be running out.

If Niang fails to find the inspiration he needs to change his ways in Montpellier, however, he need not look far to find role models whose paths represent his own potential future trajectories. In AC Milan team-mate Mario Balotelli, for example, he is linking up with a player who is the very personification of Niang’s troubles. With enough talent to become one of the greatest players of his generation, poor decisions and a poor attitude have seen Balotelli’s progress stall far too often. While he became something of a hero in the English press due to his outlandish behaviour during his time at Manchester City, his off-the-field antics often overshadowed his exploits on the pitch and ultimately led to his relationship with the club breaking down.

Admittedly Balotelli himself is still very young but Niang is four years his junior and can use this example to ensure that he fulfils his potential rather than allowing ongoing indiscretions to derail such a promising career.

With so much expected from the youngster in both France and Italy, the considerable pressure will undoubtedly weigh heavily. However, with a set of experienced professionals around him and perfect examples to what he can go on to achieve sitting beside him in the dressing room, Niang is as well positioned as any young footballer can be and holds the key to his own destiny.

The player now needs to take heed of the resources available to him and focus on his football. After endangering his – and other people’s – lives with his most recent wrongdoings, there might not be many chances left. Calmly walking into court with a stifled smile on his face, it is hard to know whether Niang truly realises the severity of the situation. For his sake at the very least, you have to hope that he does.