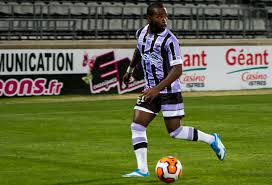 Get French Football News understands that Ligue 2 side Istres have already received several offers for their 19 year old attacking midfielder Naby Keita who has very much burst on to the Ligue 2 scene this campaign.

The Guinean’s contract runs until June 2016 and Istres are expected to hold out for at least €1.75m for the player this summer.

Ligue 1 strugglers EA Guingamp have already offered just under a million euros for the player and it is unclear as to whether or not the Ligue 2 side have rebuffed EAG’s interest entirely.

In Serie A, Bologna have made a marginally better offer for the midfielder believed to be in the region of just over €1.1m.

According to France Football, AS Saint Étienne have also made an enquiry to Istres about the player.

Get French Football News has learnt that Bordeaux have also made a concrete approach regarding the player’s availability as the look to find replacements for Ludovic Obraniak and possibly Jaroslav Plasil.

Diafra Sakho: On his way out