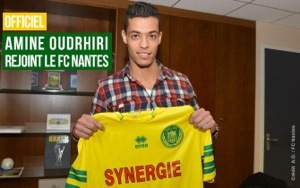 Earlier today, Nantes officially confirmed that they had completed the signing of Amine Oudrhiri on a three and a half year deal. The highly rated young attacking midfielder arrives from Red Star Paris.

As we all know, Nantes are flying high so far this season. The signing of Oudrhiri not only means that the club have more strength in depth in their midfield, and have another option in the attacking midfield spot, but they also have a talent on their hands who could come good in the next few years and really pay back the club’s investment.

Amine Oudrhiri was already a regular starter at his previous club, Red Star Paris, which is no mean feat for somebody who is just 21 years old. He has the creative skills to develop into a really good attacking midfielder at Nantes, and no doubt the high-achieving Ligue 1 club are the perfect fit for a developing, young player. At Nantes at the moment there is nothing but positive energy, and that can only help the development of the young Amine Oudrhiri.

Arsenal contact Lyon to enquire about the availability of Alexandre Lacazette