Nicolas Anelka: What next for football’s ‘enfant terrible’? 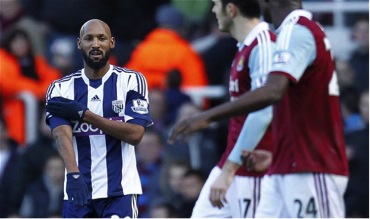 After all the problems stemming from his infamous quenelle goal celebration at West Brom late last year, Nicolas Anelka has recently caused outrage once again with a reported no-show in Brazil when he was supposedly meant to be finalising a move to Atletico Mineiro. Here, we take a look back at some of the defining moments of this perennial misfit’s career, examine the impact of his most recent indiscretions and ask ‘what next for Anelka?’

When glancing through the catalogue of incidents that have punctuated Nicolas Anelka’s globe-trotting professional career, it certainly cannot be said that the 35-year-old striker has ever been a stranger to controversy. Even by his own high standards for mischief, however, the current season has represented a new high in trouble-making for the former France international.

Indeed, while the fact that his list of honours is just as long as this collection of misdemeanours is a testament to the talent that has seen him remain at the top of the professional game for almost 20 years, Anelka is currently edging ever closer to being remembered for the wrong reasons when he finally decides to call it a day.

Having represented 12 different clubs in his career to date, Anelka could have easily fallen into the category of ‘well-travelled journeyman’ but has been saved from this status by the fact that he is actually an extremely gifted player.

Looking back now, Anelka’s early career represents something of an expensive, international Groundhog Day as he repeatedly impressed before irreparably severing his ties with clubs. After first displaying his undoubted potential at Paris Saint-Germain, Anelka sealed a move to Arsenal in February 1997 aged just 17, with the switch marking the first leg of his long-standing, tumultuous relationship with the English game.

He went on to become Arsenal’s top scorer in the 1998-99 season with 17 Premier League strikes and was voted PFA Young Player of the Year. However, a perceived lack of on-field commitment soon alienated the fans and earned Anelka the nickname Le Sulk – a name that seemed particularly fitting when he demanded a move away from Arsenal in the summer of 1999, citing his poor relationship with the British press as a key reason for his unrest.

Following a £22.3 million move to Real Madrid in the summer of 1999 that started out well before declining as he fell out with fans, fellow players and the coach (to the point of receiving a 45-day suspension for refusing to train) and a £22 million return to PSG where he once again displayed his range of talents before developing issues with the club’s coach, the cycle seemed set to keep repeating itself, but Anelka actually allowed his football to do the talking on a more regular basis in later years.

There has still been plenty of time for outbursts, however. Memorable incidents include blaming his penalty miss in the 2008 Champions League final on then Chelsea manager Avram Grant bringing him on too late without a proper warm up and famously ending his international career by earning himself an 18-match ban for launching a tirade of scathing insults towards then France coach Raymond Domenech.

Yet despite all the upheaval, Anelka’s mentality has seemingly changed little since the confident youngster burst onto the scene at Arsenal in such explosive fashion. During spells at Manchester City, Liverpool, Bolton, Chelsea and Fenerbahce, the Frenchman, who scored 14 goals in 69 international appearances, has always demonstrated the same talent and unwavering sense of ambition that allowed him to amass a total transfer fee of just under £90 million.

Indeed, this ambition was certainly on display heading into the current season as, having spent a typically controversial period at Shanghai Shenhua that encompassed a loan spell at Juventus during the second half of the 2013 season, Anelka moved to West Bromwich Albion in June 2013 when his contract expired. Clearly, rather than being willing to ‘settle’ for winding down his playing days in China with a reported £10 million annual salary, Anelka still wanted to test himself at the highest level.

Furthermore, despite the furore surrounding his sudden decision to retire following the death of his agent in August 2013 – a decision that Anelka soon reversed – the player’s career at West Brom had started with great promise. After enjoying a blistering pre-season that saw him notch six goals in as many matches, he seemed to be back to his best – focusing solely on his on-pitch performances and displaying a sense of maturity that looked certain to mark his signing as one of the bargain deals of the summer.

But then followed an all-too familiar downward spiral that has since proven to be the catalyst for perhaps the most hotly-debated period of his career to date. Upon his return to the West Brom starting XI after a spell on the sidelines, Anelka grabbed a first-half brace against West Ham and celebrated scoring with the now notorious quenelle gesture as a tribute to his friend, French comedian Dieudonné M’bala M’bala. Labelled as an anti-Semitic or inverted Nazi salute, it was a moment that typified so much of what had come before for Anelka as he seamlessly united natural talent and pure controversy.

While consistently pleading his innocence, insisting that the fuss surrounding his celebration had been exaggerated and that the gesture was anti-establishment rather than anti-Semitic, the fallout of the event has proven to be much more important than any so-called tribute to a friend ever could have been, a fact that Anelka is yet to acknowledge.

In an interview with French paper Metro News, the player defended himself vehemently: “Because some people have performed [the quenelle] in front of a synagogue, then the gesture is suddenly meant to be racist and anti-Semitic in any place and in any situation? Sorry, I’m not swallowing that,” he said.

“I am neither racist nor anti-Semitic and this quenelle was a simple dedication. [It] was very misunderstood. I have no record of racism or anti-Semitism, there is no evidence to support it, not even a shred of evidence. I have never had a problem with the Jewish community, and besides why would I have? There are so many questions and no answers.”

Yet regardless of his own intentions, Anelka can surely appreciate the wider impact of such a gesture. More costly than just the five-match ban and £80,000 fine imposed on him by the FA, the gesture has proven to be hugely damaging to West Brom. Beyond being deprived of one of their star forwards for an extended period and having to face the negative press surrounding the event – which have both undoubtedly contributed to their ongoing struggle against relegation – the club’s sponsor Zoopla, which is owned by Jewish businessman Alex Chesterman, were unhappy that the Baggies continued to pick Anelka after the incident and decided to cancel their sponsorship. While the deal was due to end in the summer anyway, the company’s decisive action brought an abrupt end to the biggest sponsorship deal in the club’s history.

Despite initially standing by their player in the face of his continued to refusal to acknowledge any wrongdoing, Anelka’s position within the club gradually became untenable. Finally, when he took to social media in March to announce that he was leaving the club, the striker was promptly sacked by West Brom for ‘gross misconduct’.

Rather than taking some time to regroup and allow the whole incident to blow over, however, reports emerged almost instantly that transfer talks were underway regarding a move to Brazil’s Atletico Mineiro. Set to form a duo with Ronaldinho – Anelka’s teammate at PSG in the early 2000s – Brazilian media said that discussions between the two had helped convince the Frenchman to join the club.

Then, in an almost unprecedented, yet not entirely unexpected turn of events, Anelka managed to estrange his prospective employers before even arriving in the country. Despite Atletico director Eduardo Maluf expecting Anelka to report to the club on Monday 14 April, the club were since informed by the striker’s agents that he would not land in Brazil until the end of the week, prompting L’Equipe to ask the question ‘Where is Anelka?’, with the answer at the time being that nobody quite knew.

A day later, the player – who converted to Islam in 2004 – was pictured in Kuwait attending an event organised by the Kuwait Ministry of Religious Endowment and Islamic Affairs, something that enraged Atletico’s director: “He had the obligation to let us know about this in advance,” said Maluf, even suggesting that the club are considering filing a complaint to FIFA against the player and his agents. “Atletico is much bigger than this, the deal is off.”

But the story doesn’t quite end there: always one to have the last word, Anelka later posted a video on his Facebook page claiming to have had no knowledge of the move: “I’ve never spoken with this president,” he claimed. “I’ve never spoken to anyone from this club. I never accepted the offer so I don’t know how I could already have signed this much talked about contract. For me, this is an extraordinary story. I’ve spent 20 years in football and I’ve never seen that yet. I’ve never experienced it.”

Regardless of whether or not this latest mishap is down to wrongdoing on Anelka’s part, however, the point has been reached where nobody is surprised by the inevitable controversy that follows him at every turn. For those who still have the patience to keep up with the perpetual merry-go-round of shocking stories that his career has come to symbolise, the most fitting question seems to be ‘what next?’

With a potential worldwide ban limiting his appeal to interested parties, a move into coaching seeming unlikely despite a brief spell in charge in Shanghai and having burned his bridges with clubs in almost every footballing nation in the world, has Le Sulk tried the patience of potential employers one too many times?

Whatever happens, however, based on all that has come before it is hard to imagine that he will simply disappear into the sunset. With so many clubs willing to risk almost everything to give their team an edge, Anelka’s talent could well see yet another side take the plunge. Ultimately – and amazingly so for such a gifted footballer – after two decades of talent, transfers and tantrums, it is still hard to know whether the gamble is fully worth taking.