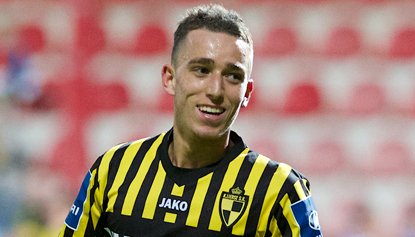 Get French Football News understands that OGC Nice have agreed deals to sign both Julien Vercauteren (Lierse) and Niklas Hult (Elfsborg) and that they’re both in the process of completing their medicals on the Côte D’Azur at the time of writing.

Niklas Hult, 24, is generally accepted to play most naturally as a left-sided midfield player from IF Elfsborg who OGC Nice have agreed an undisclosed fee with for the signature of the player. Hult is understood to have cost Les Aiglons just under €1m, if one includes all the bonuses attached to the deal.

However, this season Hult has played at left-back and is renowned in Sweden for his immense pace. The player has agreed a 3-year deal with OGC Nice and provides the Ligue 1 side with an exciting new signing.

Julien Vercauteren, 21, has been one of Belgian side Lierse’s revelations of the past two seasons, only turning pro in 2012. The attacking midfielder is poised to replace the outgoing Christian Brûls who has left the club after they decided not to activate the buy-out clause in his contract.