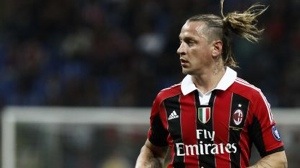 Get French Football News can confirm L’Equipe reports that Frenchman and centre back Philippe Mexes is holding discussions with Turkish side Trabzonspor after being told by AC Milan’s new manager Clarence Seedorf that he will not block any attempts for the French World Cup hopeful to leave this month.

L’Equipe has been told by Trabzonspor representatives that they are confident of tying up a deal but Get French Football News does not believe that negotiations have reached that advanced a stage for the Turks to be assured that they will be signing the player. More to follow in the last week of the January transfer window.

The player had been rumoured by Italian press reports to be in talks with AS Monaco and Fiorentina although these links are not concrete at present.

Falcao’s ACL injury: What it means for AS Monaco, for Colombia and for him