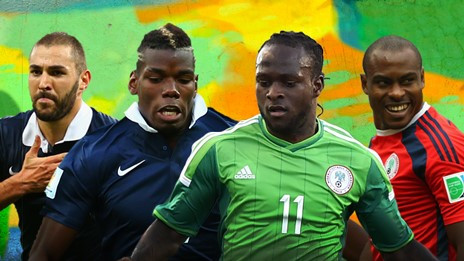 France will face Nigeria on Monday 30th June in Brasilia in the round of 16 of the World Cup. In order to better understand the opponents of Les Bleus, Get French Football News brings you an analysis on Nigeria: its team, its players, its strengths and also its weaknesses.

Before all, it is worth noting that France has only played once against Nigeria in football history. It was a friendly game which took place in Saint-Étienne five years ago: Nigeria beat France by just the one goal, in a 0-1 scoreline.

During the group stage, France maintained a steady line-up; with Blaise Matuidi and Karim Benzema in particular the key players in Deschamps’ squad; and have won a total of seven points, with 8 goals scored and just 2 conceded goals. France amazed the world with its first two performances, and in particular the second one against Switzerland, with a stunning 5-2 win. Initially considered as an outsider, France has gradually become a serious competitor in the competition, while England, Spain, Portugal and Italy have been eliminated against all expectation.

France doesn’t understate Nigeria; nevertheless, its team is generally unknown for the French. Nigerian football expert Emmanuel Etim – who works for Nigeria Info FM – explains to us how Nigerian people see the match between France and Nigeria.

What can you tell us about Nigeria’s performances during group stage?

The Nigerian team began their 2014 campaign in Group F against Iran at the Arena da Baixada with a 4-2-3-1 formation, which had Vincent Enyeama in goal, Godfrey Oboabona and Kenneth Omeruo as centre backs ably supported from the flanks by Juwon Oshaniwa and Efe Ambrose; while Ogenyi Onazi and Ramon Azzez played in front of the back four – with Mikel sitting deep. Ahmed Musa operated from the far right while Moses on the left and Emmanuel Emenike the lone man forward. The match ended goalless, and has in many ways has been regarded as one of the most disappointing matches at the World Cup so far. As much as the Iranians brought little in attacking terms, the Super Eagles gave little to suggest that they were the best team in the African continent.

In the second fixture against Bosnia and Herzegovina, in which the focus was not to lose above all else, the Coach Stephen Keshi deployed entirely different tactics in terms of personnel. He brought into the starting eleven experienced forward Peter Odemwingie for Victor Moses and little known Michael Babatunde for Almeria’s Ramon Azzez. The advantage of this strategy was that striker Emenike, who practically ran himself to exhaustion in the first match against Iran, had time to interchange positions which eventually was beneficial to the team as he provided the much needed assist to Odemwingie’s goal.  Lots of credit also has to be given to Michael Babatunde, who ensured he was effective in the uninspiring midfield position with strong runs and breakaway passes. Nigeria finished the match 1-0 victors.

The final group fixture against Argentina, a team who has been drawn against the Super Eagles in the last three FIFA World Cups, seemed like one tie which would be played with a mentality of pride, as both teams had already effectively done enough to advance to the round of 16. The formation employed by Stephen Keshi was unchanged, as he started with the entire team which dispatched the Bosnia and Herzegovina side. As the saying goes, ‘If it ain’t broke, don’t fix it’.  The Argentines were favored to win, and eventually that was exactly what they achieved, despite a ferocious fight from the Eagles courtesy of an exceptional display from the much maligned Ahmed Musa, who scored a brace.

So, what should we expect from Nigeria then?

The team’s progress to the Round of 16 is currently being celebrated in Nigeria as an achievement far beyond expectation. It is the first time the Super Eagles have made it into the last 16 of the competition since France 98. The opposition then was Denmark and they lost comfortably 4-1. It was a defeat attributed to over confidence by players of the Super Eagles of Nigeria.

In 2014, the opposition is France and I expect the coach of the team, Stephen Okechukwu Keshi, to stick with players who he believes can deliver the job and deploy a 4-5-1 formation which could easily metamorphose into a 4-3-3 formation;  in order to stifle the midfield. As the French team have shown that they can get goals, their strength lies in the distribution skills of Matuidi, Sissoko, Cabaye, and on most occasions, Mathieu Valbuena drifting into midfield to support the team. Unfortunately for the Super Eagles of Nigeria, Michael Babatunde broke his right arm and is unavailable for the fixture, which means Victor Moses, who was left out of the teams in the two previous matches, would be recalled. The good news is that defender Godfrey Oboabona, who was taken off injured in the first match, has recovered and may be giving the nod ahead of Captain Joseph Yobo.

The French side is favored by pundits to advance at the expense of the African champions, but as it’s been with football nothing is guaranteed until the end of a match. Also the 2014 World Cup has been one filled with surprises, and one cannot bet against Nigeria defeating France. A reminder that the only recorded meeting between the two sides was a friendly match which ended 1-0 in favour of the Africans.

by A.K. and Emmanuel Etim