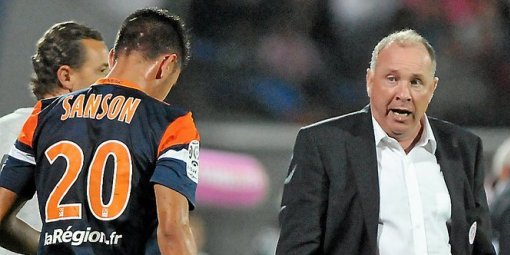 Montpellier are regularly plucked for their talented players, much like the attention attacking midfielder Remy Cabella is getting. The club is well-versed in producing young players and buying quality from the lower leagues, another example of the latter has emerged this season in Morgan Sanson.

Having had an excellent season in Ligue 2 with Lens, famous for bringing through the likes of Didier Drogba, Sanson has continued his form into Ligue 1 with MHSC. He’s played 23 times for the club in the league and whilst he’s yet to score, he’s had two assists and has contributed a lot to Montpellier’s counter attacking style of play.

Both of his assists have been to Cabella, against Evian and Lyon, with both being defence-splitting passes allowing the forward to use his pace to get in behind whilst having the right weight for him to take it in stride. He’s slowly become a regular within the team that sits comfortably in mid-table despite only losing 7 games this season.

He’s also broken into the talented French U21’s squad, starting in a friendly against the Netherlands before earning a place in the Euro Qualifying game against Belarus. Whilst he’s not contributed too much yet, with other young players being promoted he’ll have more opportunities to shine at youth level over the next two years.

Sanson is usually played as a centre midfielder for club and country, but can be used as a winger, in the number 10 role or as an emergency right back if needed. What stands out when playing in the middle of the park is his ability to transform Montpellier’s play from defence to attack quickly, using both his passing ability and his skill with the ball at his feet.

He has good balance and awareness, regularly picking up the ball and taking on his man before laying it off for a one-two or carrying on with a run at the defence, Sanson is one of those players that fans get excited for. He’s a good passer of the ball, able to switch play with ease but even better is his choice of passing, he never seems to waste possession and regularly picks out the right pass at the right time.

Combined with that is his composure, he never seems to panic in possession which is rare for someone of his age and even rare for those with more experience. He’s not afraid of a tackle either and whilst his physique suggests he could be powered off the ball, his pace and reading of the game allows him to either cut out the ball or time his tackles to get the ball back.

Many will feel like when they watch him that he is being groomed to be the ideal replacement for Remy Cabella and it’s easy to see why, but it might be best to keep him in that central midfield role. He could work further forward but it would take away from what he does from starting attacks to simply limiting his ability to the final third of the pitch.

However, it’s easy to comprehend that Sanson will eventually take the mantle as Montpellier’s next star when, rather than if, Cabella leaves in the summer. He needs to continue to improve as a player, cementing which position he will stay in then the team will grow around him. He might not break into the national side, with youngsters like Pogba, Kondogbia and Griezmann in front of him, but he could be very important to Montpellier for years to come.

Alex and homophobia: how great is the issue?

AS Monaco agree pre-contract with Victor Valdes but…