PSG and FFP: Trouble ahead? 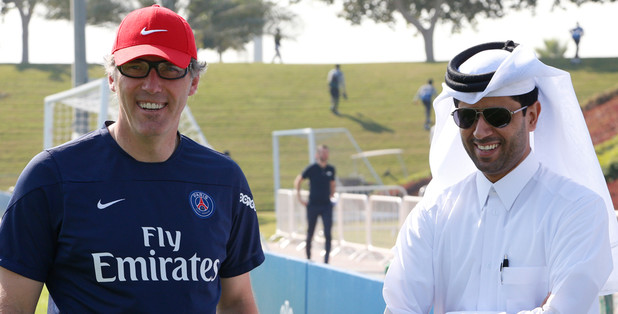 Paris Saint-Germain may be preparing to face Chelsea in the quarter-finals of the Champions League on Tuesday, but their presence in the competition next year could be under threat if they fall foul of UEFA’s Financial Fair Play regulations.

In February 2014, UEFA announced that 76 clubs were being investigated in relation to their compliance with Financial Fair Play, which forbids clubs from spending more than their revenues. PSG’s revenue last year was just shy of €400million, and this season the figure is expected to come close to €500million, but UEFA have misgivings about the sources of this revenue, and are thus investigating the reigning Ligue 1 champions.

European football’s governing body are reportedly concerned by PSG’s deal with the Qatari Tourism Authority, which will be worth €200million a year by 2016. The deal, struck in October last year but back-dated to 2012, is the largest of its kind in the history of football, surpassing similar commercial deals held by other top European clubs such as Bayern Munich and Manchester United.

The FFP regulations, agreed in principle in 2009, are designed to prevent clubs spending more than they earn to achieve success, and risking future financial difficulties as a consequence. Financial Fair Play has become a buzzword in football parlance over the last few years, but so far the biggest spending clubs in European football have yet to suffer any punishment or sanctions for their finances.

Brought into active use for the 2011-12 season, failure to adhere to the rules of Financial Fair Play can result in sanctions ranging from fines and retrospective trophy stripping to disqualification from European competitions, a fate that befell Malaga last season. In light of UEFA’s investigation this season, there is a possibility that PSG could be faced with similar sanctions.

The issue for Les Parisiens stems from their deal with the Qatari Tourism Authority. In February this year, UEFA warned clubs that they would have to prove they were not attempting to bypass Financial Fair Play by agreeing vastly inflated sponsorship deals with commercial parties associated with their owners. Since 2011, PSG have been owned by the Qatari Investment Authority, and therefore the sponsorship deal struck with the Qatari Tourism Authority has understandably aroused suspicions.

At present, UEFA’s independent Club Financial Control Body are investigating the sponsorship deal between the Ligue 1 leaders and the QTA, assessing its merits to see whether it breaks the regulations of Financial Fair Play. PSG are not the only club to have struck a large sponsorship deal with a party closely related to their owners; Manchester City’s enormous tie-in with Etihad Airlines is likely to be under similar scrutiny given their links with the Abu Dhabi United Group.

To determine whether or not PSG’s deal with the Qatari Tourism Authority breaks the rules, the Club Financial Control Body must decide whether or not the annual €200million deal represents fair market value and does not count as a related-party transaction. If the investigation concludes that it PSG are in the wrong in either respect, they will be subject to UEFA sanctions.

The clubs currently under investigation by the Club Financial Control Body have been asked to provide up to date financial information, and will learn in April whether they will be subject to further investigation. Given the nature of PSG’s deal, it is likely that they will be placed under scrutiny in this secondary round of investigations, before a final verdict will be announced in June.

PSG have, as yet, refused to comment publicly on any developments surrounding the investigations, but it is likely that they will contest any damning verdict which could bring sanctions from UEFA.

Should Laurent Blanc’s side be found guilty of trying to bypass Financial Fair Play, there is no scope for them to be banned from continuing in this year’s Champions League. However, they could well be banned from appearing in the competition next season, even if Ibrahimovic and co lift the big-eared trophy in Lisbon in May.

Last year, UEFA general secretary Gianni Infantino made it clear that PSG are aware of the rules: “Everyone, including PSG, know they have to demonstrate [the deals] are without cheating,” he said. “We have a regulation which speaks about fair value of deals and the fact that a related party cannot just inject money into a club directly or indirectly.”

PSG insist that the money received from the QTA is legitimate sponsorship and that Qatar are trying to use the football club to attract global recognition. Whether UEFA agree is yet to be seen, but the issue certainly has not distracted the club on the pitch.

The 1-0 win over Nice last Friday marked nine consecutive wins in all competitions for the club. Laurent Blanc’s men have also not conceded a Ligue 1 goal since February and possess, in Zlatan Ibrahimovic and Edinson Cavani, one of the most fearsome striking partnerships in world football.

The 2013-14 campaign is set to be a very successful one for Paris Saint-Germain but, with the threat of Financial Fair Play sanctions looming large over the Parc des Princes, it could yet be a difficult summer for the club.