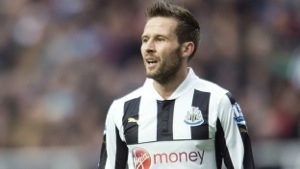 Get French Football News now understands that Yohan Cabaye’s transfer from Newcastle to PSG is a done deal, subject to a medical.

The player is expected to arrive in Paris late tonight after agreeing personal terms with PSG today. Yohan Cabaye has agreed a 3.5 year deal with the club and, according to some French reports, will earn €5m a year although we have no confirmation of such a figure.

The player has landed in Paris at the private airport Bourget at 23.55CET and was greeted by PSG Sporting Director Olivier Letang.

As for a fee, we maintain that Newcastle have sold the player for £20m plus bonuses.

The player will have a medical tomorrow morning and RTL understand that there will be a press conference unveiling PSG’s new signing at 1800 CET tomorrow.

The player will then be presented to fans at the Parc des Princes on Friday as PSG take on Bordeaux in Ligue 1. The deal is done.