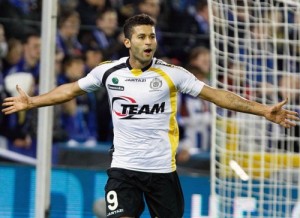 The richest side in Ligue 2 have started their January transfer window with bang as they look to secure the services of Angers’s versatile Alharbi El Jadeyaoui and Lokeren’s striker Hamdi Haraboui in an attempt to boast their squad to earn promotion to France’s top flight for next season.

Alharbi El Jadeyaoui, the 27 year old Tunisian midfielder, who had a trial with Premier League giants Arsenal this summer, is in advanced negotiations with RC Lens to sign from Angers SCO according to our colleagues at France Football. Angers and Lens are understood to be close to agreeing a fee and no hiccups are expected in that regard. The contract negotiations have been a little more difficult, with the player’s hefty wage demands slowing any possible move down.

The second target, Hamdi Haraboui, is currently plying his trade with Belgian outfit KSC Lokeren and Get French Football News understands that Lens have contacted the relevant club to enquire about the player’s availability.

La Voix du Nord confirmed this morning that Lens were interested in the player.

St Étienne looking for a central midfielder: What about Remi Gomis, Josuha Guilavogui or Carlos Sanchez?