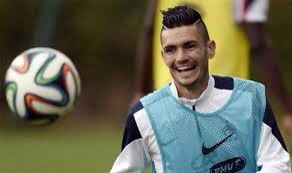 Despite all of the big business done in the Premier League this summer, with the likes of Alexis Sanchez, Diego Costa, Ander Herrera and Eliaquim Mangala all arriving on these shores for north of £30m, it could be argued that the signing with the most influence this summer doesn’t involve a player joining any of the big six in England.

Manchester City kicked off their title defence at Newcastle on Sunday, with the main spotlight on those in Sky Blue as they look the retain the Premier League title they won last year. But after the game, despite City winning 2–0, many talked about the little Frenchman with spiky hair, who shone in his new colours of black and white; Remy Cabella.

Cabella arrived on Tyneside this summer after being the star of the Montpellier show; and for fans of Ligue 1 he will be a name on the lips of most who are regular watchers. I must admit that I heard a lot about the attacking midfielder, but had seen little; after his debut on Sunday, it is clear he is certainly someone to keep an eye on.

Cabella, who got into Didier Deschamps’ Les Blues 23 man squad for the World Cup in Brazil after injury to Franck Ribery, started off slightly on the periphery of things in his first taste of competitive action in the Premier League, but after City scored their first, the tide started to turn.

The 24 year old was at the heart of the action, troubling the champions with his pace and trickery, and often got fans of Newcastle on the edge of their seat. Just like he had been doing for several years at Montpellier, Cabella was helping his team push up the pitch, and with his vision helped create three clear cut chances for his team mates, linking up well with fellow compatriots Yoann Gouffran and Emmanuel Riviere, who both played in Ligue 1 with Bordeaux and Monaco respectively.

It was certainly an impressive debut, he was very unlucky not to register an assist, but towards the end of the game was looking tired. However, that is to be expected as the Frenchman acclimatises to the hustle and bustle of the English top flight, a much quicker league than the one he knew as home.

Despite that, Cabella looks very likely to fit in, with his energetic style and overall quality, and will be expected to be the creative spark in the Newcastle team. Cabella may suffer towards winter with general fatigue, quite like the similar Eden Hazard did in his first season at Chelsea after his move from Lille, but over that period he may be rotated by manager Alan Pardew to avoid his new star getting burnt out.

Cabella looks set to be in the team again for the Magpies game away at Aston Villa, which should be a much easier test for him. The season ahead looks to be one where Newcastle will be near the top half of the table, and after his £12m move, Remy Cabella will certainly be key to that ambition. The Toon have a new hero, and Cabella has a new public to please.