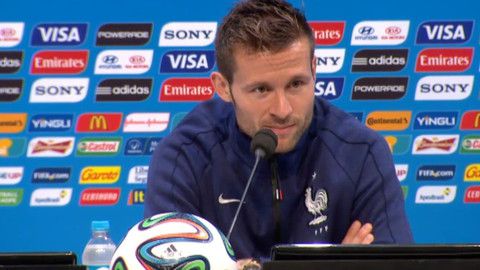 Speaking ahead of France’s final Group E encounter against Ecuador, Yohan Cabaye and Didier Dechamps met the assembled media to discuss their side’s preparations for the upcoming match.

While Cabaye focused almost exclusively on the feeling within the camp and gave his verdict on the squad players who are likely to see some game time in the Ecuador match, Deschamps was happy to talk about the World Cup on a more general level and expressed his sympathy for the several European nations that are making an early exit from the competition.

On the feeling within the squad: ‘We need to maintain the same team spirit that we’ve had since the start [of the competition].’

‘If we keep that same mentality then we can achieve great things.’

‘We all feel that this is a group of 23 players that is doing extremely well. The guys getting less playing time should feel important too.’

‘The players picked for the Ecuador match will have our trust.’

On Deschamps: ‘Deschamps has believed in us from the very start. He’s created a group of players that work together extremely well.’

On Matuidi: ‘What Blaise is doing is amazing but it doesn’t surprise me at all. He’s a very determined player.’

‘Blaise is extremely important for the team.’

On his role: ‘I have a specific role that I try to uphold. When we have the ball, I like to be the one to start off attacking moves.’

On Schneiderlin: ‘[Morgan] Schneiderlin is a great player with great quality. He’s very technically gifted and keeps hold of the ball well.’

On Digne: ‘Lucas is ready. He’s had a rapid rise to the top but he’s a very gifted player. He’s not below anyone else.’

On being barred from training in the Maracana: ‘It’s always nice to be able to play in a stadium that you don’t know the night before… Too bad I guess.’

On preparations for the Ecuador match: ‘I haven’t had anything to change going into this match in terms of preparations. There’s a feeling in the camp that I want to maintain and we need to take that top spot in the group.’

‘You’ll see what changes I make on the day of the game. We’ve taken into consideration how much time the players have had on the pitch so far.’

‘It’s not a game without any pressure, it’s a World Cup match. We can’t play down its significance.’

‘We need to finish the job. Our aim is to win but Ecuador are playing for their own place in the next round.’

‘Ecuador play in a 4-4-2 and have a top class front four. [Antonio] Valencia provides them with plenty of power and pace.’

‘They like to play a direct style of play going up to their two central strikers.’

‘Emer Valencia is very mobile and lively. His timing is great despite his small stature.’

‘Before playing we will know which team has finished top of Argentina’s group but we’re aiming for first place.’

On giving experience to players: ‘You have to play to get that experience and there’s a balance you need to find.’

‘The players all know each other but you never know how an individual might react to the pressure and the tension.’

On the World Cup so far: ‘Lots of top European nations have already been knocked out. The South American sides have certainly acclimatised better here.’

‘Playing on their own continent gives the South Americans a certain extra strength and energy.’

‘Brazil have been extremely competitive but also had a complicated start to the competition with the added pressure that they’re under. They remain one of the big favourites to win it.’

‘I know it’s extremely tough for Italy [to go out at this stage]. I feel for [Italy coach] Prandelli because he’s done some great work up until this point.’

On looking ahead in the competition: ‘Being the best team in your group doesn’t provide any guarantees moving forward.’

On Benzema: ‘Benzema could start or come on. He’s on top form but I have a lot of players to choose from.’

On their own qualification: ‘We had a tricky time in qualifying. The crux of it all was Ukraine, that changed a lot of things for us.’

‘Before the Ukraine match, the players hadn’t known much joy in a France shirt. The players that were there immediately understood the duties associated with the shirt.’