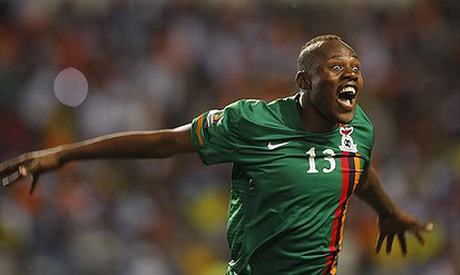 Ligue 1 side Sochaux have today confirmed the arrival of defenders Stoppilla Sunzu and Nathan Sinkala from African side TP Mazembe. Sunzu arrives on a three year deal for a fee in the region of a million euros, where as fellow Zambian Sinkala moves on only a six month loan.

Both players will add vital depth to a squad which is currently faltering in Ligue 1. 24 year old Sunzu plays as a centre back but can also play in defensive midfield. The player is most famous for scoring the winning penalty for Zambia in the 2012 African Cup of Nations. Sinkala is the younger of the two at 22, but can also play in defence or slightly further forward in midfield. Like his elder, Sinkala is a Zambian international. The 22 year old has a buy out clause in his loan deal, should Sochaux choose to activate it.

Sochuax have set about strengthening their squad in the early stages of the transfer window and have bought in Jordan Ayew on loan from Marseille as well as the two Zambians.

Sochaux have confirmed that the two should be presented on Wednesday after they arrive at the club tomorrow.

Dr Alex George on how to retool workouts without access to the gym: “Make the most of your home environment.”

PSG’s principal sponsor, Accor, intends to withhold payments if the 2019/20 season is not completed

UEFA threaten to exclude Belgian clubs from Europe next season