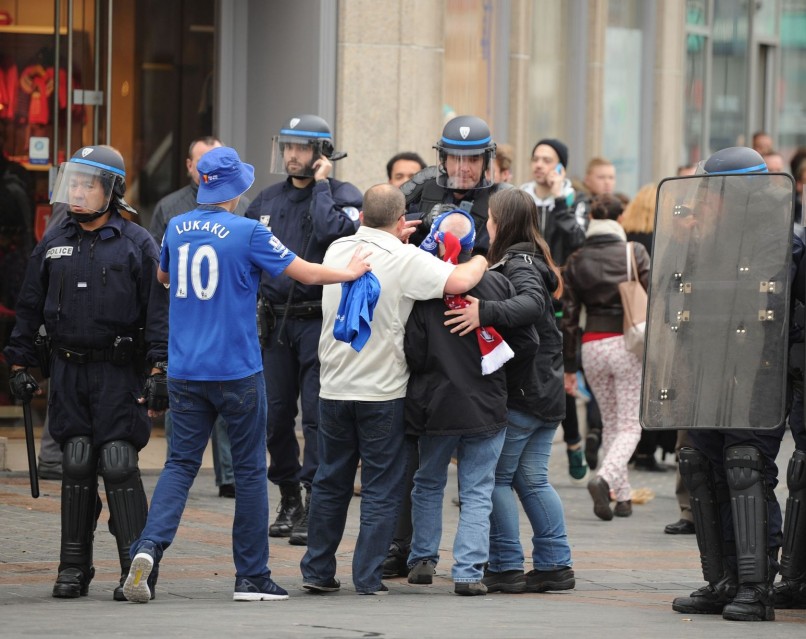 Sources in Lille have confirmed to Get French Football News that “drunk Everton fans were destroying parts of the square, including tables and chairs”, before the French police decided to intervene, using tear gas to do so.

A clear picture of the events has now emerged. The authorities have confirmed that a British police officer spotted two Everton fans one a known hooligan, the other a known drug trafficker in the crowd in the town square. Plain-clothed policemen then tried to detain the two aforementioned individuals but fellow Everton fans, not knowing that these men were from the authorities retaliated to support the two men in question.

Scuffles ensued and the CRS (riot police) intervened using tear gas, but no rubber bullets despite some claims on the contrary.

A bang was audible in the square as the police let off the first of three tear gas bombs.

The police then moved towards a particular group of Everton fans, knocking at least one them to the ground.

According to several English sources, the majority of the Everton fans had not provoked the police.

In a video uploaded to the Liverpool Echo website, a father tells the story of how his 7 year old son was sprayed with pepper spray and then vomited. When the father tried to get in to the local McDonalds so that his son could get into a place of safety, the police only allowed the child in and not him. 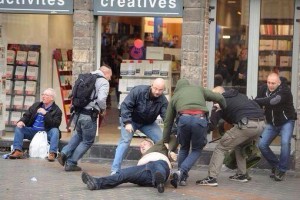 Trouble is believed to have first started when the plain-clothed police arrested a fan and then Everton fans, unaware of who the people were, retaliated to help their compatriot out, which the French police saw as dangerous enough to release tear gas on this specific group.

No rubber bullets have been used by the French police according to eyewitnesses but authorities have confirmed that two defence, rubber bullet guns were out. Whether that means they were used or not is a different matter. An Everton fan has been arrested for throwing objects at the police, but local authorities claim that nobody was injured following the attack.