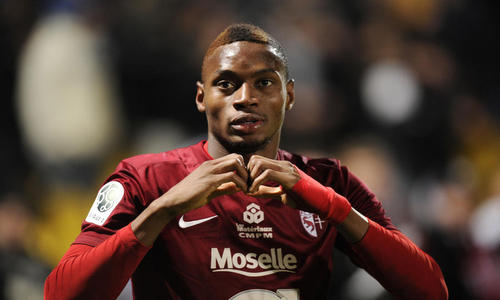 West Ham United have announced the signing of FC Metz striker Diafra Sakho on a 4 year deal for a fee believed to be €7m including bonuses.

FC Metz announced on Tuesday that the deal was off after West Ham United changed their mind regarding the nature of the agreement and instead wanted a loan deal.

The Ligue 1 side had threatened to make an official complaint to UEFA as they blamed West Ham United’s unacceptable lack of respect but a deal has been completed.

West Ham were believed to have wanted to sign two strikers, but a deal supposedly fell through at the beginning of the week for a certain Connor Wickham from Sunderland.

The player has not returned from London since Thursday-Friday of last week when he first arrived.

An excerpt from the Get French Football News 2014/2015 Ligue 1 Season Guide says more about the player below:

“Talismanic would be the only word befitting when describing the effect Diafra Sakho has had on Metz in the last two seasons. Despite the player’s claims at the end of last season that he was going to move on from Les Grenats, the club denies having received a single offer for him. 43 league goals in the last two seasons, albeit against weaker opposition in Ligue 2 and National respectively, is not a statistic to be sneered at. Sakho is a frighteningly well rounded forward, who is both powerful in the air and shoulder-to-shoulder but additionally one who has the necessary pace to enable him to play just off the last defender. What is perhaps yet more surprising is his technical capacity that often bewilders standing defenders to the point of no return. The question is not will Diafra Sakho be a success in Ligue 1, but rather will Metz be able to hold on to him for sufficiently long enough in order for him to make the decisive difference which could decide whether or not Les Grenats remain in Ligue 1 come this time next year.”