What do Les Bleus listen to? Blaise Matuidi

Today it is the turn of France’s very own Duracell bunny Blaise Matuidi. 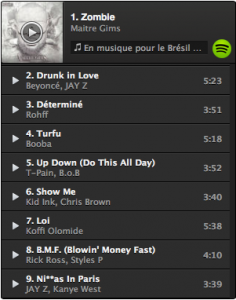 It turns out that PSG’s box-to-box midfielder is a real fan of rap, with Jay Z and Booba both featuring heavily. Perhaps that is the secret behind his ability to never stop running?

Hatem Ben Arfa could be at Barcelona, says Benzema