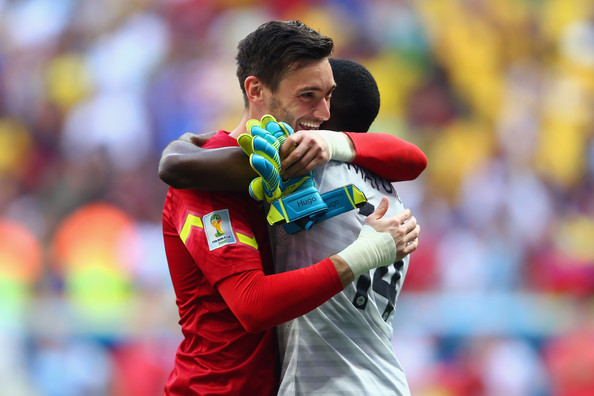 With excitement building ahead of France’s quarter-final clash with Germany on Friday, Mamadou Sakho and Blaise Matuidi were the latest in a succession of French players to meet the press in Ribeirao Preto.

Beyond giving their take on the upcoming match, both players spoke glowingly about the positive feeling within the camp and Sakho also confirmed his return to full fitness ahead of the big game.

On his recovery: ‘I’m feeling good, feeling better. Everything went well in training yesterday and I’m available for selection.’

On the feeling within the camp: ‘We’re a very young side and we’re trying to instil a new team spirit. It’s all very natural, we have a great group of guys.’

‘The existence of a hierarchy in the camp is something you’ve made up. Right now we’re all members of this team in our own right.’

‘We’re all committed to playing for the France shirt, everyone is doing their job.’

‘We can feel that it’s going well with the team. Paul [Pogba] sets the mood: yesterday, after eating, he put on some music and just danced alone.’

‘There’s no skin colour, no generation gap. Everyone is mixing really well.’

‘After eating yesterday, eight of us were just chatting with each other.’

‘Life within the group is always a very important element. Sometimes when you have strong characters it can just explode.’

‘I feel like I’m reliving the early years of my career in this group.’

On Germany: ‘Germany are a huge side but I don’t want to talk about them too much, it’

Newcastle United are in talks over Sega Coulibaly