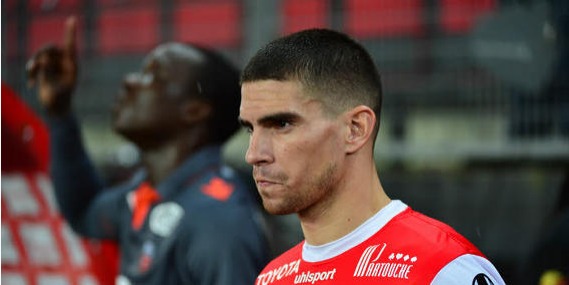 Welcome to the second piece in a brand new series at Get French Football News, the World Cup Watch. With the World Cup in Brazil scheduled to begin in June of this summer, our various correspondents will be endeavouring to keep you informed with regards to the players that ply their trade in France’s chances of fulfilling every footballer’s dream of representing their nation at football’s most celebrated tournament.

Today, the talented Maher Mezahi takes an in depth look into the chances of some of the most prominent Algerians currently playing in France of wearing their country’s colours in Brazil this summer. Each of the player’s chances has been graded out of ten in terms of their likelihood as to bagging a place on that plane to Brazil in what is now under 90 days away.

Boudebouz left Sochaux at the beginning of the year hoping for a more mediatized platform at Bastia. The exposure would, in theory, bring him back in favour with his international coach, Vahid Halilhodzic. In truth, Boudebouz’s spot on the roster has been in jeopardy since the arrival of the Bosnian in 2011.

The troubles came early, as Boudebouz missed the very first training camp held by Halilhodzic with injury. His subsequent failure to show up in Algiers for an independent assessment by national team doctors troubled Halilhodzic. Boudebouz was ‘disciplined’ for a few matches. In the 2013 African Cup of Nations, he was caught with a water pipe in his hotel room and he hasn’t played with the national team since.

His performances with Bastia have been on and off. At times, he’s looked a true bargain at just 1 million euros. But the attacking midfielder is also plagued with anonymity at times. He has probably been good enough for a call-up, but he needs to turn it up a notch to make Halilhodzic forget about his previous misdemeanours.

Carl Medjani has become one of the cornerstones of the Algerian national team. He already has World Cup experience, having been selected by Rabah Saadane in 2010. The centre-half has also been Coach Vahid’s most used player, playing every single minute of the World Cup qualification campaign.

But Medjani was finding the same amount of game time at the club level, so he moved from Olympiakos to Valenciennes in January in search of increased game time. Ariel Jacobs has granted it and it seems as though only injury can now bar the former Saint-Etienne prospect from the World Cup in Brazil.

Like Medjani and Boudebouz, Foued Kadir has World Cup experience and that is an asset in itself. In fact, Foued Kadir is probably vying for a spot on the final roster against Ryad Boudebouz.

The 30 year-old has the advantage of experience and coach’s preference, but his younger counterpart brings valuable set-piece expertise and incisive passing. Kadir’s trip to Brazil is probably safe as long as Boudebouz remains inconsistent but Kadir will also have to continue to play with Rennes.

Fethi Harek was first called up for a friendly against DR Congo in 2008, but has been a forgotten figure since. Nadir Belhadj and Abderraouf Zarabi made the left flank their own and it was tough for other left-backs to breakthrough.

But with Bastia’s ascension and the decline of the aforementioned two, Harek is once again relevant.

One of his greatest strengths is his dependability. You know you’ll be getting an experienced, reliable defensive fullback who can also deputize as a centre-half. Harek’s biggest obstacle is that he, once again, has two established players in front of him in the depth chart.

Former Saint-Etienne defender Faouzi Ghoulam is Napoli’s starting left-back and Djamel Mesbah has been a mainstay since the 2010 World Cup. Dislodging either will be incredibly difficult for Harek.

Mehdi Mostefa is in a peculiar situation vis-à-vis the Algerian national team. The Ajaccio man has fallen out of favour with the public who believe he is simply not good enough to play in midfield. He was even harshly whistled off of the pitch against Slovenia.

But Coach Vahid is incredibly fond of Mostefa. Mostefa plays almost every match either as a fullback or as a ‘sentinel’ sitting in front of defence. He does not bring much offensively in either role, and his limited passing range is rather conspicuous, especially when in midfield alongside Nabil Bentaleb and Saphir Taïder.

Mostefa will probably make the final squad, but should not start any of the three group stage matches. The Brazil World Cup may be one of his last chances to represent his country on an international level.

Algeria have lacked a proper right-back since their re-introduction to footballing relevance sometime in 2008. Defensive midfielders and centre halves have had to cover, and a 3-5-2 was even employed for about a year to no great success.

It was, therefore, a great relief to see Aissa Mandi patrol the right side of defence against Slovenia. His natural ability spoke for itself. The 22 year-old Reims man played intelligent and short combinations for the duration of the match and remained defensively solid. If he stays injury-free, Aissa Mandi will go to Brazil.

Metz are in good position for promotion, leading the Ligue 2 with 11 matchdays remaining. Kashi has been a big, big part of their success. He is remarkably two-footed and employs a high-energy, all action playing style, covering large areas of the pitch.

Most Algerian fans would like to see Kashi replace a more limited player (Mostefa) But it’s quite an unlikely move as he is an uncapped player, and he is not playing in an elite league. Kashi might be one for post-tournament reconstruction..