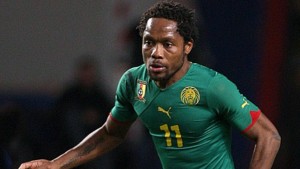 World Cup writer for The Telegraph on all things Cameroonian football Sam Crocker writes the third piece in our World Cup Watch series, focusing on which of the following Cameroonians plying their trade in France are likely to be representing the Indomitable Lions in Brazil this summer.

Despite the long-running connection that Cameroon holds with France, you may find it surprising to hear that the number of Cameroonians playing in their once colonial heartland is not as high as it once was. With various members of the Indomitable Lions squad more distributed throughout Europe, you can now see almost as many playing in Spain and even Turkey as you can in France. However, Ligue 1 and Ligue 2 still remain well-travelled paths on the route of an average Cameroonian footballer, with plenty vying for places in Volker Finke’s 23-man squad.

After managing to salvage his status as a Ligue 1 goalkeeper with a loan move to Guingamp for this season, the-man-with-the-most-fantastic-name-in-the-world appears to be benefitting from national team coach Volker Finke’s first team football over reputation policy.

First making his debut for Cameroon in 2010, Assembé has been a solid bench warmer for Cameroon, acting as a loyal servant should the man in front of him get injured and frequently slotting in for occasional 45 minutes of football in friendly matches. Despite Charles Itandje ousting the 70-cap Carlos Idriss Kameni since Finke took over last May, Assembé’s place has remained consistent, and with Guingamp conceding the 5th fewest goals in Ligue 1 at the time of writing, he’s clearly been impressing domestically.

Despite his national team statistics taking somewhat of a hounding during Cameroon’s 5-1 loss to Portugal this month, in which he conceded 4 goals after coming on at half-time as a substitute, it is likely he’ll be one of the 3 mandatory keepers on the plane. Even if Finke does bring Kameni along despite he lack of recent caps for Cameroon, it is likely Sammy N’Djock will be the one to drop out ahead of Assembé.

Despite enduring a reasonably unpleasant campaign representing Marseille this season, N’Koulou has been a favourite in his homeland since making his debut in 2008, at the age of just 18. Hard to believe that this man is still 18, there is a reason that he already has 44 international caps for his country, and will be expected to earn many more as his career progresses.

With the defence arguably Cameroon’s strong point when it comes to sussing them out as a unit, N’Koulou is the primary reason that the backline invites so much respect. Having formed a formidable partnership with former-Lille centre-back Aurelien Chedjou, injuries will be the only thing to split these two up when it comes to playing together in Brazil, despite Chedjou inviting the second-half glut of goals with a terrible mistake when the score was just 1-1 in a recent fixture.

Cameroon’s best player in the opinion of this writer, it is very difficult to imagine that even the most catastrophic of Marseille’s collapses will stop N’Koulou lining up in the first game against Mexico in Natal.

With last summer’s move to Lyon proving to be arguably one of the better transfers amongst Ligue 1 clubs, the former Montpellier man has continued to cement his place in the thoughts of Volker Finke with his solid domestic performances – even if he may not be a starter for the Indomitable Lions.

In and around the Cameroon setup since his days at Châteauroux in 2008, you would not call his representation for his national side consistent, having made it into Paul Le Guen’s 2010 AFCON squad, before missing out on the World Cup squad later that year. Now seemingly in favour of current manager Volker Finke, he has been a relatively regular feature of Cameroon’s bench or starting line-up since he took over.

The main issue for Bedimo lies in the competition for places at left-back. Probably the position with the most depth after centre-midfield, he will be competing with Gaetan Bong to be the stand-in for first choice Benoit Assou-Ekotto. It too will depend on what composition Finke chooses in terms of number of players in each position in his squad, so Bedimo should keep on putting in the performances for Lyon if he wants to guarantee his selection.

The former French U-21 international Jean-Armel Kana-Biyik is a relatively recent arrival to the Cameroon setup, having only declared his intention to represent Cameroon in 2012, as his chances of playing for his country of birth diminished. However, with his dad, Andre Kana-Biyik, a member of the infamous 1990 World Cup Cameroon squad, he is currently looking to solidify his place on the plane to Brazil.

Whilst playing for Cameroon apparently runs in the blood, Kana-Biyik has the unenviable task of overthrowing the Chedjou and N’Koulou partnership at the heart of the defence if he wants to play in Brazil, with his only caps for the national side thus far limited to the odd substitute appearance hear and there.

He does fit Finke’s criteria however, having been a consistent member of the Rennes starting line-up for several years now, so hope still remains. His main competition is Galatasaray’s Danny Nounkeu, who has the advantage of being flexible enough to slot in at right-back when required, which does cast some doubt on Kana-Biyik’s name appearing on the squad list for this summer.

Very much one of the mainstays of this Cameroon team, Jean Makoun remains one of the first names on the team sheet for the Indomitable Lions, with his chances made even better since his return to form with Rennes, after a couple of seasons in the wilderness.

Wearer of the previously retired no.17 shirt at Lyon following countryman Marc-Vivien Foe’s death, Makoun stated his pride at wearing this number in memory of Foe, and his performances for the national team have made every Cameroonian proud indeed. A real box-to-box midfielder for Cameroon, he has been one of the more impressive performers in recent years in the centre of the park, scoring two of the four goals against Tunisia to secure their place in Brazil.

Despite centre-midfield being quite well stocked for Cameroon, Makoun isn’t likely to be ejected by anyone else in the team, as he provides the ability to both defend and contribute to goals – something that has been sadly lacking in recent games.

Coming up to his eighth year in the Cameroon setup, the relatively meagre 37 caps he’s received since making his first Indomitable Lions appearance shows the inconsistent nature of N’Guemo’s involvement in the national team.

Whilst a constant feature of the Bordeaux team since joining in 2011, N’Guemo has suffered from the considerable competition that surrounds him, as the stereotypical African defensive midfielder model has meant that Cameroon are slightly overstocked in that department. With Alex Song, Jean Makoun and Eyong Enoh being the favourites of Finke during his time in charge, meaning N’Guemo has generally had to bide his time on the bench.

However, he has been a reasonably consistent feature in recent games, and is likely that Finke will take at least five centre midfielders with him to Brazil, which is good news for N’Guemo. An issue may arise if Stephane Mbia (who has been playing right-back for Cameroon) is put in midfield by Finke; in which case it is likely to be a straight decision between N’Guemo and Joel Matip.

As Ligue 1 enters its final stages as we come to the end of March, Vincent Aboubakar will not want the season to end, after what will be known as the breakthrough season in his career.

Having scored 12 goals so far this season, the 22 year-old has very much solidified his claim for a World Cup place this season, after some initial doubts about his goalscoring ability. Having lacked the stats to back up the apparent talent, Aboubakar has been truly excellent this season, and looks set to lead the line in Brazil this summer.

Having been taken to the 2010 World Cup as an 18 year-old still playing for Coton Sport, 4 years later he looks set to be the central striker in the front three, with Samuel Eto’o and Eric Choupo-Moting or Benjamin Moukandjo likely to be either side of him. Finke may choose to pick Pierre Webo over him instead in the line-up, but Aboubakar will almost certainly be on the bench either way.

Another player who came into the set-up in 2011, after the disastrous 2010 World Cup performance, Moukandjo is another who has been in and out of the squad over the past few years. After a couple of appearances in the group stage of qualifiers, it was the 2nd leg playoff against Tunisia where he made the real difference.

Played on the right side of a front three, he grabbed a goal for the Indomitable Lions, offering something they were lacking throughout – creativity. A rare example of a Cameroonian in the current crop who can play attacking midfield and on the wing, he offered a vital connection between the midfield and forwards, and looked to really enjoy his time in a Cameroon shirt.

As previously mentioned, he will be battling it out with Eric Choupo-Moting for a position in the starting line up on the wing, but should make the squad either way. With Jacques Zoua – his only real competition in the position – not performing for Hamburg, Moukandjo should be part of the squad this summer; assuming Finke carries on the current formation plans.