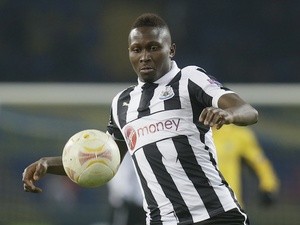 Last Sunday, during Newcastle’s controversial loss at home to Manchester City, Frenchman Mapou Yanga Mbiwa made a tackle on Samir Nasri that would rule him out for 8 weeks with a knee injury. Many, including Nasri’s dad himself, were left angered by the challenge, but Yanga Mbiwa has spoken about the issue in a recent interview.

Mbiwa was quoted as saying: ‘He (Nasri) regained the ball, and I just wanted to prevent him from going forward, so that he fell off balance.’ When Mbiwa’s initial challenge was shrugged off by Nasri, he made a second to ensure the City player could not continue running. Mbiwa, though, says that it was not his intention to hurt Nasri. He adds: ‘It was certainly not my aim to hurt him. It was more a desire to trip him, but there was no malice.’

The Newcastle man went on to express his concern for Nasri, and how he feels horrible about what happened. He says: ‘Unfortunately there was a consequence (Nasri’s injury).’ He also says that he ‘tried as hard as I could to get his number, then called several times but he did not respond.‘ He finished: ‘I’ll try again to call him, because I want to apologize in person.’

Although it will be little consolation to Samir Nasri, it is clear that Mapou Yanga Mbiwa meant no malice in his challenge. It is also clear from what he has said that he feels extremely bad about what he did to his fellow Frenchman, and has done all he can to make up for his tackle on Sunday. With Nasri’s injury keeping him out for 8 weeks, less than initially feared, hopefully everything can be sorted out between the two, especially with Brazil looming in the horizon.

Ajaccio: Mutu, Popescu and Belghazouani out