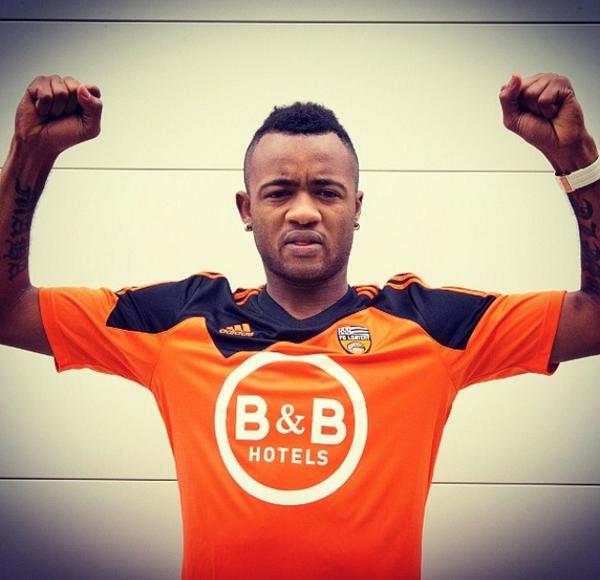 The Ayew name is one every French football fan will know and the family has long since been associated with Olympique Marseille. Abedi Ayew, or Abedi Pele as he was better known, was part of the legendary OM side that lifted the UEFA Champions League in 1993, while his sons André and Jordan have made over 300 appearances combined for the club after progressing through the club’s youth academy.

While older brother André has established himself as a key player for “L’OM”, Jordan became an increasingly peripheral figure after the signings of Dimitri Payet & Florian Thauvin at the start of the 2013/14 season. After being loaned to Sochaux during the 2014 January transfer window, he decided to end his relationship with Marseille and signed permanently with FC Lorient for the 2014/15 season.

Although a versatile forward, Ayew is naturally a striker and has benefited greatly from playing in his preferred position at both Sochaux and Lorient. He was predominantly used out wide for Marseille and only really got an opportunity up front when first choice centre forward Andre-Pierre Gignac was out injured. Despite attracting interest from a number of Premier League clubs this past summer, Ayew chose Lorient as they were able to guarantee him first team football in his preferred position.

Stylistically, he is very much a goal-poacher, one who thrives of service into the 6-yard box. Although only 5ft 11in tall, the trademark Ayew spring makes him a danger in the air, a skill he has not previously been able to showcase to its full extent playing out on the wing. His excellent movement and quick acceleration means he is difficult to mark, especially in open play. A good example of his movement in action came for Sochaux against Bastia last season.

He initially drifted towards the far post but darted back to the near post to beat the sprawling Squillaci to the ball to superbly head home Corchia’s delivery. Against Nantes in the final fixture of 2014, he demonstrated the opposite type of run when he lost his marker Vizcarrondo with a near post run checked to the far post before heading past Riou.

Of his 11 Ligue 1 goals in 2014, six came one the end of crosses and four were headers. Ayew is also comfortable with the ball at his feet and is a strong dribbler although he tends to run with the ball less when playing in a central position. Another strength of Ayew’s game is his work rate. He is a tireless individual and will look to press the opposition defenders into a mistake, not giving them a moment’s peace.

Although Ayew has a number of impressive attributes required to become a quality striker, his game is still lacking in certain aspects. Although he is quick and agile, he is not particularly physically strong. The physical nature of Ligue 1 means that he can often be outmuscled and as a result, his hold-up play is an area of weakness. It is due to this that he is best deployed with close support in either a 4-4-2 with a strike partner, or in a 4-4-1-1 with a No.10 behind him.

His pace and work-rate meant that he was often used out wide for Marseille, but he is not as effective in this role as he is a better finisher than he is a creator. Despite scoring seven goals for Marseille in the 2012/13 campaign, he failed to register a single assist. He has shown signs of improvement in this area though as he has managed to contribute four assists for his new club in the first half of the 2014/15 season, most notably a well-weighted square pass for Jeannot to equalise against Toulouse in round 15.

Ayew’s first real season as a first team regular for Marseille was in 2011/12, where he managed to score three goals in 34 league appearances (17 starts) although the side endured a difficult campaign, finishing 10th in Ligue 1. The future looked bright for Ayew as the young Ghanaian progressed well in the following campaign to score seven goals in 35 appearances (19 starts) as Marseille finished 2nd to qualify for the Champions League.

This proved to be a curse in disguise for Ayew though as the club were able to attract higher calibre players in the transfer market and as a result his first team opportunities became limited. His form dropped at the start of the 2013/14 season and after scoring only one goal in 16 appearances (seven starts), Ayew was loaned out to Sochaux in January for the remainder of the season.

Ayew took a while to settle in at Sochaux but after failing to score in his first eight matches for the club, he netted five goals in his final 10 appearances as they were narrowly relegated from Ligue 1. His form at Lorient was almost identical as again, after a slow start (one goal in first eight games), he improved to score six in his next 11 matches, albeit three from the penalty spot.

2014 represented Ayew’s best year in terms of goal-scoring as he recorded 11 goals in 34 Ligue 1 appearances. His form for Sochaux at the start of 2014 saw him called up to represent Ghana at the 2014 World Cup in Brazil. Despite only managing one start for the “Black Stars” at the tournament, he did feature in every match and even managed to score a hat-trick against North Korea in a pre-tournament warm-up match.

At 23 years of age the best should be yet to come for Jordan Ayew though and “Les Merlus” fans will be hoping that now he has fully settled at the club, he can up his strike-rate even further in 2015 to help propel the Brittany club away from the relegation zone.