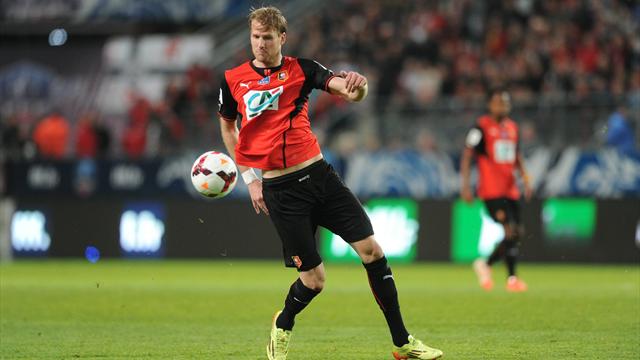 The following piece was written in December 2014 and published on the 5th January 2015. Ola Toivonen ranked 44th in our index out of French football’s 100 best players in this year’s Get French Football News 100 and was a new entry this year.

One recent Ligue 1 arrival that has made this year’s GFFN 100 is Rennes’ Swedish striker Ola Toivonen, who has largely made a very positive impact to his team since arriving in January of last season from Dutch side PSV. He has showed that he can score goals from all sorts of areas, and was crucial in both Rennes’ solid Ligue 1 finish and their special run to the Coupe de France final.

On his day, Ola Toivonen is a pain for any defender to deal with. He is tall, standing at 1 metre and 89 centimetres, and possesses the strength necessary to pose a considerable aerial threat, whether that is from set pieces or open play. His height is also very useful in defensive positions, when Rennes are defending opposition set pieces.

However, he is more than accomplished on the deck also, scoring a handful of goals with clinical finishes on his right foot. In fact, he has scored every single one of his four Ligue 1 goals with his right boot so far in the 2014/15 campaign, showing that he is not all about height and power.

He has slotted in very nicely into the current Rennes outfit, largely because of his attacking flexibility. He can score with any part of his body, and from a variety of situations, meaning that it is easier for the likes of Paul-Georges Ntep to provide opportunities for him.

Perhaps Toivonen’s most important trait in terms of goal scoring is his clever movement inside the box. Looking back on the calendar year, almost all of his goals come from in and around the 6-yard box, because he manages to slip away from his marker to find himself free and with a relatively simple finish to grab a goal.

Toivonen’s excellent movement was best highlighted by his recent goal against Monaco, in Week 15 of the 2014/15 Ligue 1 campaign…

A ball was played over the top to Paul-Georges Ntep, who sprinted down the left wing into a crossing position; Toivonen was well behind his team mate, but bust a gut to get into the box, where he is so deadly.

He then completely fooled the Monaco centre back by feigning to make a run in towards the near post, and peeling off to the far post instead to apply an easy tap in from Ntep’s accurate cross. Ntep received many of the plaudits for his run and cross but, in a different way, Toivonen’s movement inside the box was just as inspiring.

During his first half-season at Rennes, in the 2013/14 campaign, he managed an impressive seven goals in just 15 games, placing him in the top five Ligue 1 strikers in terms of goals scored in that period. That is not to mention his part in Rennes’ Coupe de France run, in which he grabbed a goal and an assist in the quarter-final and semi-final respectively. Rennes’ subsequent 2-0 loss to Guingamp in the final game of the tournament was disappointing, but took nothing away from the football Rennes played to get there.

An interesting and telling statistic emerging from that first half-season was that, in all competitions, Rennes only lost one game in which Toivonen scored or assisted a goal. He has not only scored plenty of goals, but important ones too.

Toivonen has slightly tailed off this season, with just the four Ligue 1 goals at the time of writing, but he has had considerably fewer performances (12) in which to impress. Having said that, he remains a crucial cog in the Rennes team, having cemented his place as the number one striker at the club.

And that brings us on to Toivonen’ main weakness. The world-class strikers in football are able to produce their best week in, week out. Now, that is not to say that they will score in every game, for that is an almost impossible feat, but you are unlikely to find the likes of Ibrahimovic or, this season, Lacazette or Gignac, have considerable goal droughts in the league.

Whilst Toivonen has impressed on many levels, his goals seem only to come in bursts, when he is in a purple patch of form. For example, both this season and last season, Toivonen has gone without scoring in the league for periods of well over one month. He needs to perform consistently to raise his talented game to the next level.

In terms of the national team, he (obviously) faces some serious competition from fellow Ligue 1 star Zlatan Ibrahimovic for the number one striker spot. However, Toivonen is still a fixture in the Swedish side, making substitute appearances or starts when the PSG man is out injured.

If he keeps scoring goals for Rennes, there is no reason why he cannot continue to fight for that number 2 spot behind Zlatan. He has a similar build to the talismanic striker and, while he does not share many of the same qualities, the Swedish side is used to deploying with somebody of Toivonen’s stature and physicality upfront.

Overall, Toivonen has done very well at his new club Rennes following his roughly €3 million move from PSV. Normally, it takes players time to adapt to a new league before they begin showing their best form.

If we are yet to see Toivonen’s full potential, then Rennes have an extremely exciting player on their hands but, even if he remains at the level he currently plays at, his ability to turn, at times, the improbable into the possible might be a key difference if Rennes are to make that next step to vying for a European spot come May 2015.

He is scoring goals and, at 28 years of age, still has years left in him to develop at this club. The big Swede will hope for the same and more in the forthcoming calendar year.

Lucas Deaux has an offer from Gent