Reims & Angers: Why one of the surprise packages’ luck will likely run out 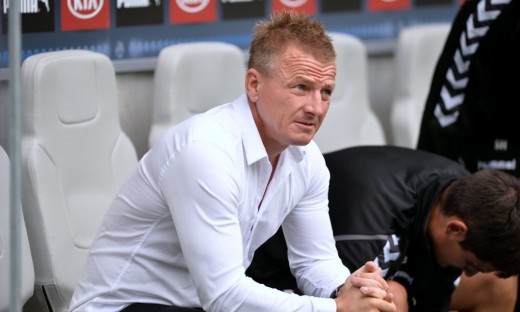 Eric Devin assesses last night’s scoreless draw between Angers and Reims, two sides who have been surprisingly impressive in the early part of this campaign.

On the face of it, a scoreless mid-week draw between a promoted side (Angers) and the league’s worst defence last year (Reims) should barely be worthy of commentary. But, if one framed yesterday’s encounter as a matchup of fifth and sixth places, with one of them (Reims) boasting the division’s joint-second-best attack, each having lost only one of their previous six matches, might it then be worthy of some consideration?

Both of these statements are true of Matchday Seven’s opening encounter at the Stade Jean-Bouin, but, with nearly twenty percent of the campaign gone, what can the match really tell us about the sides’ seasons to date, and what progress they may make in the weeks to come?

Let’s start with the away side, who, perhaps being mindful of another match on Friday, their third in seven days, made seven changes. Jordan Seibatcheu, so effective to this point off the bench, got the nod at the top of Olivier Guegan’s 4-2-3-1, while Odair Fortes, a regular under the likes of Hubert Fournier and Jean-Luc Vasseur was making his first appearance of the season.

Nicolas De Preville, who had previously contributed two goals and two assists, was on the bench, and youngster Grejohn Kyei, having started the previous three matches, wasn’t even named in the squad.

Understandably for a group generally lacking in match fitness, Reims struggled to begin the match, but grew into the game admirably as it wore on. The introduction of Billy Ketkeophomphone by Angers at the intermission caused the defensive midfield a bit of bother, but otherwise, the team were generally in the ascendancy, after a poor first twenty minutes or so.

Using so many players who were seeing their first large chunks of action, (Diego Rigonato was also making his first start of the season) some lack of coherence was understandable, especially early on against an opponent that has now kept clean sheets in five of their seven matches.

But beyond those initial flounderings, there was, eventually, a fluidity in attack, even if it was in relative terms as not every idea came off. Siebatecheu showed why he is still best used off the bench, as his touch was generally lacking, and Rigonato was likewise poor.  While far from the club’s best performance, what the match demonstrated was how this team is now, indisputably Guegan’s.

A decent start under Vasseur last season was subsequently hampered by the absences of Benjamin Moukandjo, Fortes and Prince Oniangue at the Africa Cup of Nations, and the team never seemed to recover, even once the trio had returned. With the club’s hierarchy dissatisfied with the results, Vasseur was dismissed late on in the season,and Guegan, a former player, was brought in to steady the ship.

Tasked merely with staving off relegation, the new man did his job well enough to be rewarded with the manager’s role on a permanent basis, and much of Reims’ rise this season has to be down to him and his management team.

Previously an assistant at the club under Vasseur, Guegan’s familiarity with the team’s youth players has paid immediate dividends as Kyei and Seibatcheu have quickly played important roles in the club’s success to date following their promotions.

In addition to promoting youngsters, Guegan was also able to make a few transfer moves, and the sale of Moukandjo, an inconsistent presence the previous year, allowed the club the funds to bring in Frederic Bulot and Hamari Traore from Belgium.

The former is a very canny buy, having been a regular at Caen four seasons ago after coming through the ranks at Monaco, but Traore looks to be one of the best buys of the season, relative to his price, thus far. I say relative to his price, because the right back is on loan from SK Lierse, who were relegated last seasonfrom Belgium’s top flight and forced to shed wages as a result.

Traore has been fairly impressive, showing good pace and endurance, and a nascent ability to get into dangerous positions in attack. His crossing is a little lacking, but even with that as a caveat, he has drastically improved the team, not only through his own inclusion, but because it allows Aissa Mandi to move inside to centre back.

A hulking presence at 1.84 metres, Mandi was played as a right back last season out of necessity, as he lacks the necessary pace or crossing ability to be a consistent threat in attack. Now moved to his preferred position, he has started the season quite well, producing some of the league’s best statistics as a centre back, being among the leaders in clearances, interceptions and blocks.

Anthony Weber has however also enjoyed a good deal of improvement as Mandi’s partner, the aging Mickael Tacalfred having been relegated to the bench. With Mandi and Weber showing a good understanding thus far, it is no surprise that Reims’ defence is much improved, having limited the potent attacks of Paris Saint-Germain and Marseille to just one goal between them. Mandi did go off injured against Angers, but, barring a lengthy spell on the sidelines for the Algerian, things should continue to improve in this regard for Guegan and co.

The other two notable positives that can be taken from this early-season renaissance are the team’s general attitude and tactical philosophy. With relegation no longer an imminent threat, the team have generally played in a more positive fashion, freed from worry, than they did under Guegan immediately following his appointment.

While quality is still often lacking, the side’s effort is not, and with more time together to develop and adjust to the league, the likes of Kyei, Seibatcheu and Bulot will no doubt continue to improve, their confidence thriving in a forward-thinking, attack-minded system. It is also this sense of determination that has allowed the club to remain competitive throughout their matches, fostering a never-say-die attitude that has kept the players trying until the end.

Ranked first in the league in goals scored in the last fifteen minutes of matches, Reims started the season by shocking Bordeaux with two goals in the last quarter of the match to win, 2-1. That result could be, and was, by many, chalked up to the unpredictability of a season’s first round of fixtures, but the team have also come from behind to draw Toulouse and smashed Lorient 4-1 after looking wobbly after Denis Bouanga’s equalizer early in the second half, displaying an impressive indefatigability.

Reims under Vasseur rarely showed that sort of fight, and Mandi’s injury or not, Guegan’s appointment is looking more and more like a stroke of genius. His faith in youth and shrewd transfer dealings now appear to have the club well on their way to a mid-table or higher finish, as the relegation scrap and abysmal defensive record of last year are rapidly becoming nothing but a memory.

What, then, of Angers, who, were it not for the stirring starts made by Rennes and Saint-Etienne, would likely be getting a bit more recognition?

To be frank, it is quite bit more difficult to be as optimistic about Le SCO than it is their northeastern counterparts. This round of midweek fixtures, combined with the suspension of Cheikh Ndoye, forced manager Stephane Moulin to name a changed side that desperately lacked a cutting edge, despite starting the game in fine fettle.

Abdoul Camara was the perfect example, as he consistently was able to get the better of Traore down the left, but his crosses were often wayward, despite having striker Slimane Sissoko’s 1m90 frame to aim towards.

Likewise, the team, particularly with the introduction of Billy Ketkeophomphone in the second half, were able to consistently win free kicks in Reims’ half, the deliveries, save one which forced a fine save from Johnny Placide, courtesy of defensive midfielder Romain Saiss, were lacking.

While it is not uncommon for promoted sides to have a lack of depth, the worry here is simply quality beyond the first eleven. Yes, Angers play with a determined and adept defensive unit, but without having their best eleven players on the pitch, they are simply too blunt in attack to affect any sort of result against top opposition.

It is true that Ndoye has netted twice, and makes a fine target man, having one of the league’s best aerial duel percentages, but aside from the Senegalese international and Ketkeophomphone, there isn’t much that will make opponents nervous.

With a relatively easy run of fixtures thus far, (the club’s three wins have come against the bottom three) the team will likely begin a slow side down the table this weekend against Marseille.

I am not forecasting relegation for Moulin’s team, as Gazelec Ajaccio and Troyes look sure bets to be worse than Angers come May, with Montpellier and Nantes in the running for the drop as well. However, I do worry about the team’s lack of depth and experience in the top flight, as most of their summer signings come from Ligue 2.

This combination of factors is often a killer, and, despite their bright start, come the end of the season, Angers will likely be grateful to have come up in a season with so many profligate opponents, retaining their top-flight status not through any doing of their own but rather simply not being as poor as some of their competition.

Yoann Gourcuff out until 2016

Your Guide to Wednesday’s Ligue 1 Action