Aubameyang, Gradel and… Beric? Can Saint-Etienne’s latest striker be another catalyst? 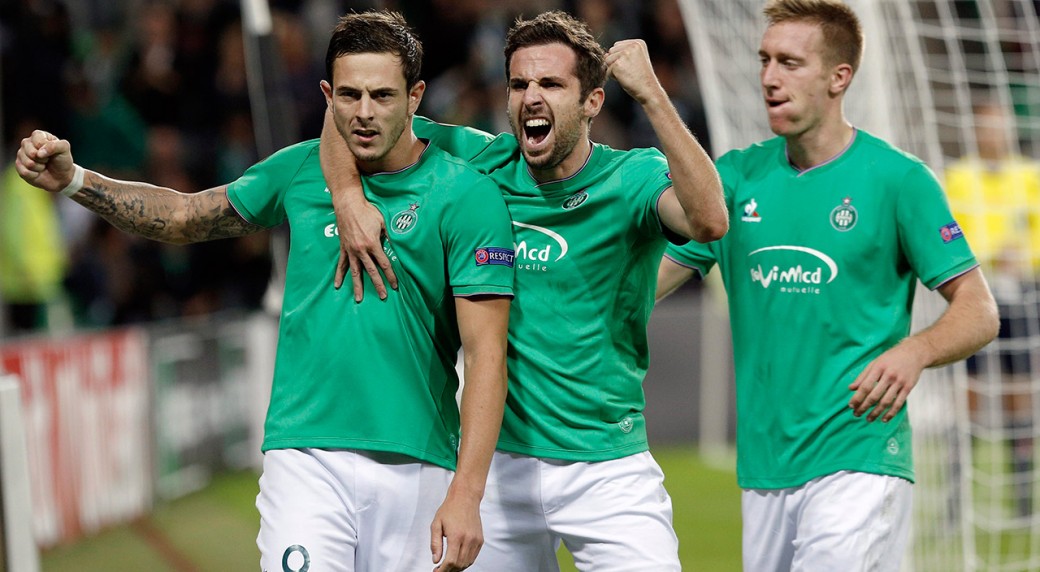 Eric Devin assesses the extent to which St Étienne’s new frontman Robert Beric might succeed for St Étienne in Ligue 1 and beyond.

Historically one of Ligue 1’s biggest clubs, with a raft of titles and deep runs in European competition, the last twenty years or so have been far from kind to fans of Saint-Etienne.

While the club have rarely been relegation fodder, despite a spell in Ligue 2 some dozen years ago, the dominance of first hated rivals Lyon and now Paris Saint-Germain has surely rankled, as despite consistently ranking among the European places of late, Les Verts have failed to break the glass ceiling of the Champions’ League, finishing fifth, fourth and fifth the last three seasons.

Those performances have been followed by uninspiring flameouts in the Europa League – last year’s group stage exit being perhaps the nadir as the club scored only two goals in six matches, finishing bottom without a single win.

After battling until the last matchday of the season for the Champions’ League, with the effervescent Max-Alain Gradel a consistent threat down the stretch, there was, at last, some optimism heading into the current campaign.

Or, at least there was until Gradel was sold. The Ivorian, after a somewhat uneven career both in France and England had seemed to reach a new level upon his return from the Africa Cup of Nations, his place as a starter at club and country suddenly assured and his confidence growing.

When the lure of the Premier League, in the form of promoted Bournemouth came calling, though, the temptation was too much for the player to resist, even with Marseille and Monaco, two of Les Verts’ primary rivals for the Champions’ League places having undergone tumultuous summers in terms of player movement.

As I detailed in a previous piece, the club have bought well in terms of adding depth to the squad, bringing in an exciting mix of young talent and more established players from around France, the intent being to take both the league and European football a bit more seriously.

The one non-Francophone who was brought in raised some eyebrows, both for his fee (€5.5M) and for the way he would presumptively fit into the team. Robert Beric had been one of Europe’s top scorers in 2014-15 for Austrian club Rapid Vienna, netting 27 goals and propelling the team into Europe.

Even with this mightily impressive scoring record, the level of competition in Austria is dubious at best, as aside from Sadio Mane, most players who have left the Austrian Bundesliga have failed to reach any significant level of success in bigger leagues. Kevin Kampl, Erwin Hoffer and Philipp Hosiner (medical issues notwithstanding) are just a few examples of players for whom big things had been predicted upon their departure, but by and large had failed to pan out.

Combined with the fee, the highest paid by a Ligue 1 club outside the top four over the summer, and there were necessarily some doubts surrounding the player, even without considering the tactical ramifications of his arrival.

His price tag, of course, would necessitate his inclusion more often than not, but would also represent a necessary shift from Christophe Galtier, whose best sides have always thrived on a pacy winger/striker being the outlet for a defensively sound outfit, Gradel and Pierre-Emerick Aubemayeng the two best examples.

Yes, Mevlut Erding had flashes of success as well, operating as a more traditional target man, but on the whole, Beric didn’t exactly fit the profile nearly as well as say, Jean-Christophe Bahebeck, another summer arrival.

Thus, while I have been fairly lavish in my praise of Saint-Etienne’s summer window as a whole I thought, with both another important European match and a trip to leaders Paris Saint-Germain on the horizon and the club well-positioned in the table, it might be instructive to take a closer look at the club’s new no 9.

With the likes of Ilan and Gonzalo Bergessio having done poorly after arriving for similar fees, Beric is first of all surely under a microscope, so for the purposes of this piece, it will be most illuminating to consider his signing from a number of angles.

First of all are his performances against quality opposition. Given that the Austrian Bundesliga is a fairly lightly regarded league, how has Beric fared against tougher opponents during participation in European competition?

The answer is actually pretty well. While his club was eliminated from the Europa League at the first time of asking in the previous two seasons, two years ago while still playing for Maribor, he scored twice against Spurs in the Europa League group stage, and notched an assist and a goal in each leg of a Champions’ League qualifying win over Ajax a couple months ago. Those are a pair of performances that may well have been the tipping point in his move to a bigger club than Rapid.

Fantastic, then; Beric is more than a flat track bully, but how does he fit into what Galtier is trying to do tactically? Moreover, is he not only a good fit, but someone who is flexible in terms of his role and willing to exert himself within a given scheme?

This may seem a bit arbitrary, but given the physical nature of the French game, talent alone is rarely enough to ensure success, especially for a player of Beric’s physical stature. The answer to that, also, is affirmative.

Whereas last year Galtier often opted for a defensively-oriented 4-3-3, especially down the stretch, expecting Gradel and Romain Hamouma to do the yeoman’s work in terms of facilitating the attack, this year, he has favoured a more forward-thinking 4-2-3-1.

Jeremy Clement and Fabien Lemoine continue to occupy the two holding midfield spots, with Vincent Pajot a more forward-thinking alternative. Romain Hamouma is consistently first choice on the right wing, while Kevin Monnet-Paquet and Jean Christophe Bahebeck have each operated on the left.

Valentin Eysseric operates behind the striker as not-really-a-playmaker, using his pace to draw defenders out of position and leaving the striker a lone figure up top. Under this system Saint-Etienne emphasise possession more than they have under Galtier in previous campaigns, allowing the fullbacks to get forward more through long balls from the likes of Loic Perrin and the defensive midfielders.

This then allows the wingers or fullbacks to use their pace to get onto these balls, crossing back into the middle for a more archetypal target man, with the wingers in particular also having licence to shoot after cutting inside with the ball at their feet.

Being that Sainté were already playing this way before Beric’s arrival, both in the league and in the Europa League Playoff round, to great effect, it would make sense that Galtier would want to see where the system could take the club.

However, with his striking options prior to the Slovenian’s transfer limited to the always hard working but often ineffective Nolan Roux, Bahebeck and the slight youngster Neal Maupay, none of whom strike fear into opponents’ hearts, the arrival of a more goal-inclined striker was necessary.

Thus, Beric is also a good tactical fit, his height and physical ability (if not his somewhat suspect first touch) making him a more natural outlet than the alternatives available.

This seemingly idle comment about Beric’s iffy first touch makes a good jumping-off point for the final lens through which to look at the player. Somewhat maligned for a bizarre, almost unintentional goal at the weekend against hapless Gazelec, Beric was admittedly fortunate to see that touch take him second behind Perrin in Les Verts’  league scoring table.

While lacking a consistent first touch, Beric is exceptional at getting shots on target, no matter his placement on the pitch, a statistic that speaks well of both his composure and awareness of space.

Witness his goal against Nantes in Week 6. While it may seem a fortuitous moment of bundling the ball over the line after a wild deflection falls to him, it is actually a rather impressive piece of skill. Beric first knocks the ball down, then, with Nantes defender Koffi Djidji literally climbing all over him, deftly swivels around the ball to put it on his favoured right foot.

With Nantes goalkeeper Remy Riou rushing off his line to cut down the angle and midfielder Birama Toure also charging into the box, Beric’s finish across the goal and into the opposite corner is impressively done, and down to his own graft.

Already possessed with a good work ethic, never willing to let a play die until the ball is in the net or in a ‘keeper’s hands, as Beric develops an understanding with his new teammates, his statistics will improve further.

With a great ability to be the kind of one-touch finisher that crossers of the ball would love to service, Beric still may have the odd ugly match or fortuitous goal, but his scoring instincts seem undulled, even as he moves up a level. Come May, the doubts that surrounded his arrival and price tag may be a thing of the past.

With last year’s success stories Marseille, Monaco and Lyon all still struggling and only surprise packages Caen and Angers above them in the table in the race for Champions’ League football, Beric will be given every opportunity to once again prove himself at a higher level, with the potential rewards for Les Verts‘ new look side including a place in Europe’s top competition for next season.