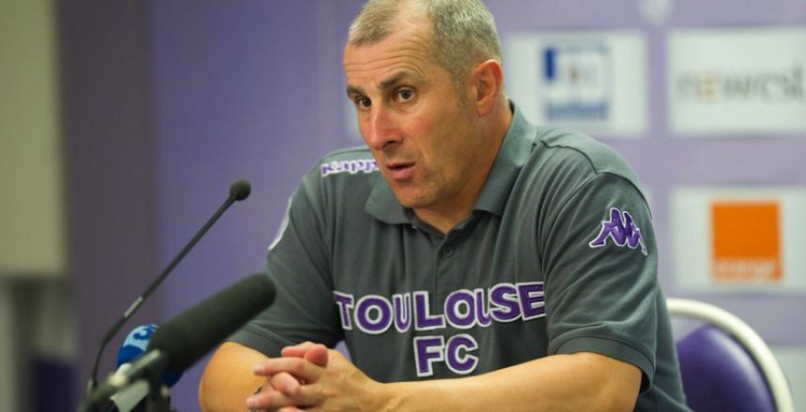 The axe has finally fallen on the longest standing manager in Ligue 1. After more than 6 and a half seasons at the head of Toulouse Football Club, Alain Casanova was replaced on Monday by chairman Olivier Sadran in the form of former club scout Dominique Arribagé.

The decision to give the head coach responsibility to a member of the back-room without any previous Ligue 1 experience is not a first. Sadran gave Casanova the reigns of Téfécé back in the summer of 2008 when he was the assistant manager of Elie Baup having only just acquired his coaching badges. It proved a good decision in the short to medium term as Casanova’s record in Ligue 1 is one Arribagé will be hoping to emulate. Obviously, without the last half-year setback.

Casanova’s first season was a great success. Toulouse finished 4th, the much-maligned striker André-Pierre Gignac finished top scorer in front of one Karim Benzema and the place was buzzing as European football was to return to south-west France.

The honeymoon period was well and truly over though in 2009/10 as Toulouse finished in lowly 14th place with the demands of European football taking its toll on a comparatively small squad. Nonetheless, Toulouse finished a solid 15 points clear of the bottom three. This bottom-half finish will remain the only blot in Casanova’s copybook with Toulouse, unless you include this current season.

This statistic could indeed explain why Toulouse, and indeed Casanova, were so prudent regarding ambition. Finishing 4th was a great achievement for his opening season, but Casanova must have felt the heat during the following campaign as results severely dipped. It is no wonder that the club then went on to finish in solid yet unspectacular spots for the next 4 years. From 2010 to 2014, Toulouse finished between the 8th and the 10th spot, each year consolidating Casanova’s position and  pleasing his chairman.

However, this strategy proved a dangerous one as fans got bored by the lack of ambition shown by the club and some might almost be welcoming this relegation fight which spices things up for TFC. Although probably not President Sadran.

So how did Toulouse go from an established Ligue 1 outfit to relegation candidates? The answer not only lies in the lack of ambition falling on the club’s behalf regarding Europe but also a decreasing quality regarding their defending.

During the first 4 seasons of Casanova’s reign, the defence was very good with a record of conceding less than a goal a game in each of those 4 years. However, in the summer of 2012, established defenders like Mauro Cetto and Daniel Congré were sold and replaced by youngsters who were naturally less experienced. This led to Toulouse conceding a whopping 47 goals in 2012/13 and 53 in 2013/14. The trend continues this season as Toulouse have already conceded 48 goals at the time of writing.

Toulouse’s squad is simply the weakest in terms of talent arguably than it ever has been under Casanova. Etienne Capoue, Moussa Sissoko and Serge Aurier were incredibly important for Toulouse in the last three or four years, contributing both defensively and offensively. Their presence providing the strike force with the necessary quality in terms of service so that a proper goal-getter in the form of Wissam Ben Yedder could flourish (15 goals in 2012/13, 16 goals in 2013/14).

Alas, Capoue and Sissoko were inevitably sold, Aurier has gone to PSG and Ben Yedder, as a result, is yet to reach double figures this season (9 goals with 9 games to go).

So, to summarise, the defence is inexperienced, the midfield presence is not what it used to be and the goals have dried up. It is a simple equation that has led to Casanova resignation. It is important to recognise that Olivier Sadran would not have necessarily fired Casanova this season, such is the loyalty that the President owes to the Frenchman for his services in the last six or so years. Casanova resigned because he felt he was no longer able to carry out his role to the required level.

Which begs the question, who is the man to replace him.

Dominique Arribagé has been in and around Toulouse for half of his playing career and all of his post-playing days. He was given his chance there where he spent his 6 first seasons from 1992 to 1998. He then joined the Pinault, a wealthy businessman, revolution at Rennes which promised much but delivered little. Arribagé stuck by Rennes’ side though for another 6 years before returning to Toulouse in 2004. His playing days would end just as Casanova was being named Toulouse head coach.

His injuries (and age) forced him to retire and he was offered a position within the club as part of the recruitment team which he gladly accepted. Arribagé then became Casanova’s assistant manager and has already named as his staff Mickael Debève as his assistant manager and Teddy Richert as goalkeeping coach. Both have spent significant time with the club. The former, 8 years and the latter, 3 years.

On Monday’s press conference, Sadran was forced to reiterate that he is giving Arribagé the keys to the club’s management entity in the long-term and that relegation will by no means signify a sacking coming Arribagé’s way in June. Frankly, Sadran could not really say otherwise as it would have heaped unnecessary pressure on the rookie. Watching the press conference, you felt that both men were confident enough that Toulouse would be able to make the great escape. It is of course possible as Toulouse are only 3 points off Evian in 18th, but a more adventurous state of mind needs to prevail when playing away games. Saturday’s defeat to Lens was Toulouse’s 12th away loss, the highest total amount of losses away from home in the league (in terms of points, Toulouse are the second worst side away from home, only ahead of Metz). This discovery is well hidden by decent home form (the 1-6 defeat to Marseille suffered a week ago was Toulouse’s first since early December). Start winning away and Toulouse have a chance.

Of course this all depends on other sides withering as well. If last weekend is anything to go by, it could happen. Of the 7 sides currently sitting in the bottom half (not counting the bottom 3), 6 of them lost.

But, first and foremost, home solidity needs to be re-established after the Marseille mauling. It starts on Saturday against Bordeaux, the Garonne derby no less.