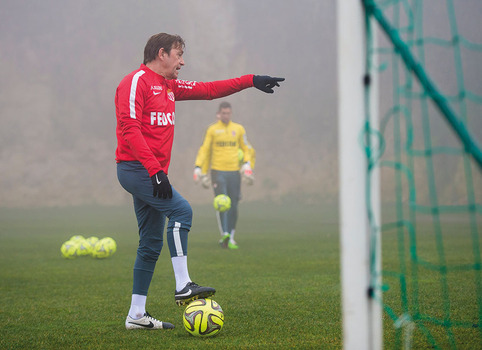 In an exclusive Get French Football News interview, AS Monaco goalkeeping coach André Amitrano reflected on ASM’s wonderful victory over Arsenal earlier this week and looked ahead to tonight’s crucial clash with Paris.

André Amitrano enjoyed a playing career with Monaco, Nice and then AS Cannes before becoming a goalkeeping coach for several top clubs including Rennes, EA Guingamp and AS Cannes before taking up his current position at AS Monaco.

On the Arsenal game…

“We were terrific I thought. We were solid and very quick and clever on the break. Leo (Leonardo Jardim) worked heard all week preparing the team of this game. We worked in training on hitting Arsenal on the counter attack and it really worked on the night.”

“The key was how hard we worked for each other and the way we set up to hit Arsenal on the counter attack. Everything clicked for us on the night in London. The manager Leo really deserves a lot of credit. He had a plan, he drilled it into the lads and it certainly worked.”

Have Monaco done enough to win the tie already?

“No, we have only made it to half time. We still have a lot to do during the 2nd leg. Arsenal are a very dangerous team. Mentally, we will have to be ready. But we have the desire and the belief that we can finish the job.”

On the game vs PSG tonight…

“We have another key match ahead of us against a strong Paris side. We have two games in hand on the leaders Lyon, so we will certainly be trying to close that gap! We are fully aware of the dangers that PSG can cause. But our players are always very motivated and want to win.

PSG manager Laurent Blanc has suggested that your side is “physically impressive”. Would you agree with this statement?

“Yes, our squad is full of confidence and we try to be solid and hit teams on the break with speed. Today will be another difficult game. But one that I will certainly enjoy!”