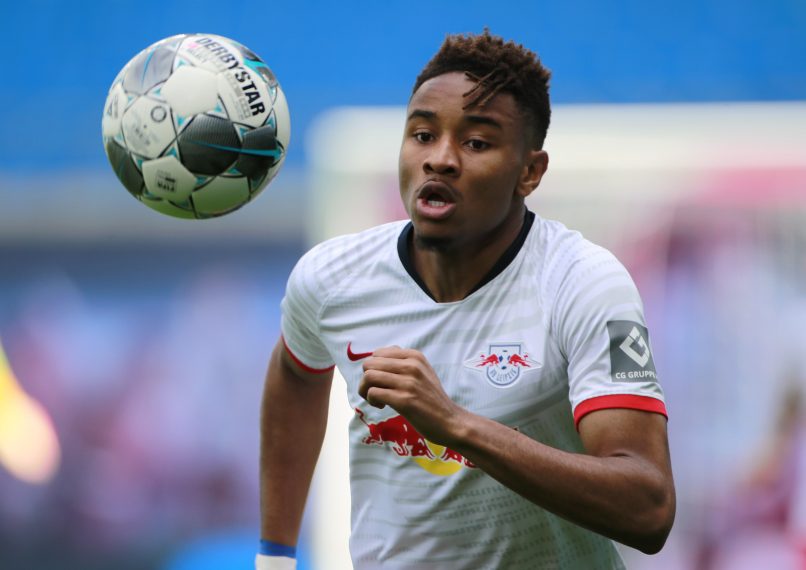 Arriving at PSG after a stint in Fontainebleau, Christopher Nkunku spent his formative years at the INF Clairefontaine where he was training during the week, playing at the weekend with PSG. It was therefore a logical step for him to join the PSG youth academy afterwards. He is seldom outclassed by others in his age group, and quickly follows the standard curriculum at the PSG training centre, two full seasons in the U17 and U19.

He played higher up the field when he was younger, as a winger or an attacking midfielder rather than as a defensive midfielder. He always showed a good sense of positional play, technical ability and dribbling quality that was above average, which he also proved this summer during the pre-season training with the first team. His best asset, according to scouts, is his ability to deliver an impressive number of assists, about twenty with the U19s last season.

Last year, he played 28 games with the U19 side, 24 league matches and 4 Youth League games, which gradually opened the doors to the professional group for him. Having convened for pre-season training in Austria and the United States this summer, he returns – speaking to Antoine Kornprobst of Get French Football News –  after an  experience that brought him one step closer to signing a professional contract with the capital clubs.

Sum up your last season with PSG for us?

To start with, I kicked off the season with coach Laurent Bonadei in the U19s, with whom I had a good pre-season. In the league, I played a lot throughout the season. At the start of the Youth League (U19 Champions League), I was not playing at all. I was in the stands or on the bench but I wasn’t coming on. I began by coming on against APOEL Nicosia, then I came on again against them again and against Ajax in the second round of fixtures. Then I started in the match against Barcelona.

Then the Gambardella came about and I started to play enormous amounts but when we got the quarter finals against Marseille and then the semis against Sochaux, I was no longer playing and we were sadly eliminated by Sochaux at the gates of the final. I was therefore not able to play the entirety of the competition like I did in the league.

What do you think it was about last season which earned you a place in PSG’s pre-season training camp in the USA?

How do I explain it? I got the opportunity to train with the pros last year when they were missing some players. I got to make a name for myself. At the end of the season, the Head of the Youth Centre, Bertrand Reuzeau made a list of youngsters that had a chance of restarting the following campaign with the pros.

I was on that list and I was therefore taken to Marcoussis where they were a lot of us. Before the departure to Austria, Laurent Blanc made his selection, there I was also fortunate enough to be in that. In Austria, I also had the opportunity to play and to start my first match for the first team. There was then another selection for the US and I was again fortunate enough to go and to participate in that.

You started against a side called Wiener (Austrian 3rd division), what was your self-assessment for that match?

I know that one is never perfect and that you can always do better but for my first match with PSG, I felt good in any case. My teammates and Laurent Blanc were happy with me. I was happy with myself too so I think I had a good performance, even if I made some errors, like everyone though.

You are one of very few non-professional youth players who went to the USA. Why did Laurent Blanc call you up?

He must have appreciated the way that I played. I performed well in training during which I made my mark so that allowed me to play and to continue pre-season with the first team. During each training session, I had to show that I had the capacity to go to the US.

Even over there, I had to show yet again that I was capable to do other things, to go further. Even today and later on, when I am asked to train with them, I will continue to make my mark because nothing has been achieved yet and I will always work.

In the US, you came across marketing events for the first time in Times Square, at Hublot as well as big matches with Chelsea and Manchester United. Did you enjoy the two weeks that you spent on the other side of the Atlantic?

I underwent an experience within the group. I knew that the cameras would be more focused on the pros, so that made my life easier, there was less pressure on me. I let things happen and I did what I was asked. Apart from that, obviously it is quite something to come on against Manchester United or Chelsea.

Ever since I was little, I would see players on TV in the Champions League. When you see Wayne Rooney or José Mourinho, you know that you are facing a great team. To come on the pitch, to play against them, it is something that I am proud of.

What does it feel like to be a youngster playing for the reserves and then all of a sudden to be rubbing shoulders with players at the highest level?

By living on a daily basis alongside Ibrahimovic, Thiago Silva or David Luiz, I saw the way that they work and how they prepare for each match. That is where you see that they really are professionals, so I am taking their example. They have a career behind them whereas we are just starting out.

We are enchanted, happy and excited to be with them whilst they are simply doing their job. And we see that their job, it is really something else. Football is a job. It is a sport but it is above all, a job.

Which pre-season match had the biggest impact on you?

Already the game against Wiener because it was my first one, but also the one against Benfica because the game was played with a very high intensity. I saw what exactly the top level was thanks to that match. We were playing as if we were against Manchester United or any other club but because we were missing players, there were lots of youngsters on the pitch.

What was it like to be integrated into a group that was so popular, having been received by hundreds of fans upon your arrivals in Chicago, Charlotte and New York?

That is where you realise how much weight PSG now carries in the world! And it was during those moments where I told myself that I was in a great club and that I was luck to be playing, to have entered into this group and to be training with these players. Above all I wanted to make my mark. The players put me at ease very quickly by talking to me a lot.

That made me feel confident and during each training session I tried to give the best of myself to show Laurent Blanc that I was capable of doing lots of things and that I could put myself in contention to have some playing time as well in Ligue 1, because that is my aim.

What sort of advice have you received from teammates playing in your position?

I have received a lot of pieces of advice, in my position Thiago Motta speaks to me a lot. He has encouraged me a lot, he told me that what I was doing was good, that I needed to continue to play, continue with my passing, continue to position myself well. Maxwell and Serge Aurier also help me a lot, even though they don’t play in central midfield.

Serge’s help came above all at the beginning, he welcomed me and spoke to me a lot, he asked me how things were going, and explained a lot of things. Blaise also spoke to me a lot as soon as he arrived. I listen to their advice and I try to apply it because it can only be beneficial for me.

How does it feel to be playing in the position that you play in with all these first team players around you?

I am proud because being able to play with great players is a privilege which is not given to everyone. Just by playing with them, it gives you the desire to reach another level so that they are happy with you at the end of the match.

You have previously said that you wanted to take inspiration from Marco Verratti. In which respects do you think you are similar to him?

I am similar to him because I am pint-sized. I love to play football and it is when I have the ball at my feet that one can see my qualities, like Marco Verratti.

What do you still need to accomplish in order to reach a professional level and to seriously be able to enter the first team?

There is still much to be done. I am still very far away from being able to integrate myself definitively into the first team. Therefore, my aim is to gain playing time with the CFA side (reserve team), to impress and to put in great performances, to become a key player in the CFA side and then to train with the pros. Only then is when Laurent Blanc will see that I have progress sufficiently and that I can play in Ligue 1.

From your side of things, is it your mission to slowly but surely integrate yourself within the first team this season?

I need to continue to work on my game, I must always be working, I must produce great performances with the CFA side and then why not if the coach thinks that I am ready. To be in the group, to have playing time, we will see. It is up to Laurent Blanc to decide, I am ready but we have not yet spoken to each other.

What is your outlook on the forthcoming season?

First, I want to play matches for the CFA side. I do not know if I will part of the Champions League squad, the coach has not yet confirmed his squad list. We will see if I am in that.

Have PSG already approached you about the possibility of signing a professional contract?

No, it has not yet been a topic that we have discussed, the club and I, but if it is supposed to happen, it will happen. I do not worry about it because all I am thinking about is working hard.

Do you think that your future is with PSG with all the great players here? For example, Coman made the decision to leave in order to increase his playing time…

I am at PSG. This is the club whereby I developed. I am going to do everything I can to sign a professional contract here.

Is winning the Youth League an aim of yours this season?

It is a realistic aim because any team can win it. With the group that we have this year, I think that we can do wonderful things. We will have to see how we deal with the pressure. The 98 generation will be able to deal with the pressure slight better because some of them have won the European Championships this summer.

For us, the 97 generation, it is true that we had the chance to participate in the competition last year, so we know what to expect. We know that we can do something.