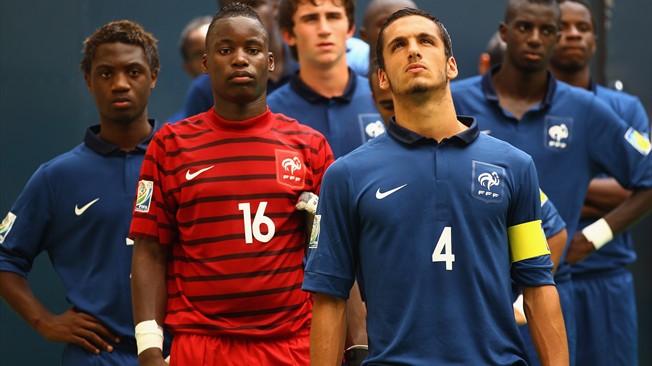 Get French Football News sat down with Championship side Brentford’s central defender Raphaël Calvet to discuss his time at the London club and his aspirations for the future.

So, firstly Raphaël, you signed for Brentford in 2013, without having played a professional game with Auxerre, the club who developed you – Can you describe for us your early years at AJ Auxerre and can you tell us what your path towards Brentford was like?

When I was 17, I progressed into Auxerre’s first-team set-up and everything was going well for me. I started to play and I did well in warm-up matches. The coach (Jean-Guy Wallemme) told me that he was going to play me at the start of the season.

Then I tore my meniscus (knee cartilage) and that put me out of training for three months. When I came back from the injury, I started to train with the first-team and then the following week a new coach arrived at the club (Bernard Casoni). He decided to put me on the bench.

Given that getting first-team game time was my priority, I then began to talk to my agent about a move to Brentford.

You decided to sign for the London-based club and to choose to leave the town where you grew up for England at the age of 19 – why did you choose to leave?

Brentford seemed interested in me and the project that they proposed really appealed to me, so I decided to head there to play my football.

You’ve now spent three years on the other side of the channel – can you explain for us the most important differences between French football and English football, from the point of view of the player?

I think the main difference between the two countries is the level of intensity in matches in England – it’s constant! It lasts for ninety-minutes. It’s spectacular. But I still think that English football is less tactical than football in France.

Recently you have been trialling with clubs, including one period with a La Liga side. What did you learn during this experience?

Yeah, the trial in Spain was really worthwhile. Football over there is different again from football in England and in France. The trial period at the club allowed me to see it first-hand and gain at bit of knowledge about how football works in Spain.

You’ve played four times for France’s U20 team and obviously lots of recruiters in your homeland have a high regard for your abilities in terms of being a centre-back – would you like to play for a French club in the future? Finally, do you have any set goals/objectives for the future?

As I said to you before, the most important thing for me at the moment is to be on the pitch playing football. If a project proposed by an interested club appeals to me and if they want to be put their trust in me, I will be happy to listen. It will be up to me to prove myself afterwards.