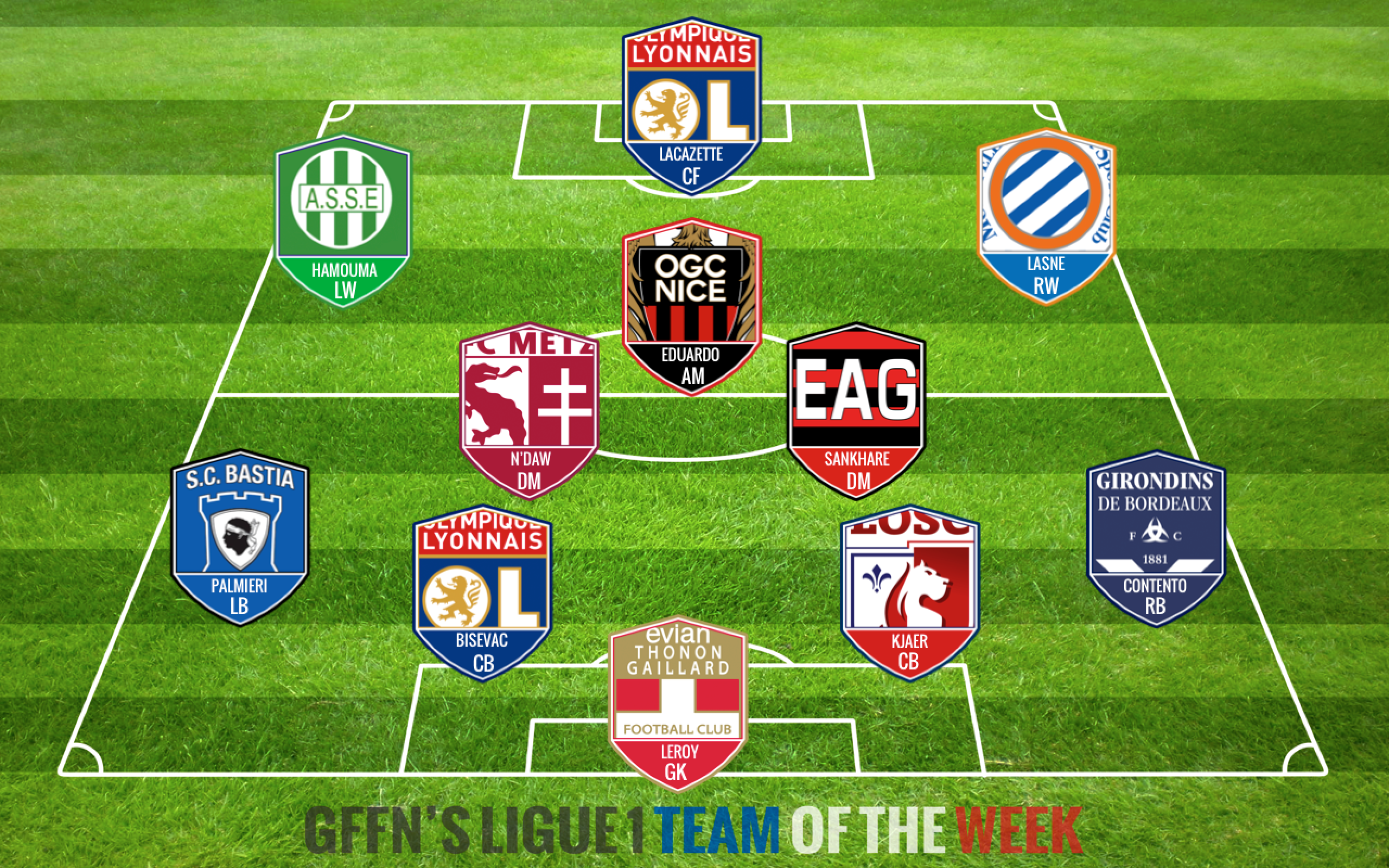 Simon Scutt returns for the first time in 2015, giving his Ligue 1 Team of the Week in a weekend of action that saw PSG slip to 4th.

In this very tight relegation fight the smallest of margins can prove decisive. As such, saving a penalty to give his side a draw and a point could prove to be vital. Leroy palmed Ola Toivonen’s penalty away amid a series of saves to keep his side in the game. Evian remain in the bottom three but there are a lot of teams within one or two points of ETG. Rennes, meanwhile, end their poor run of results which they ended 2014 with.

The standout result of the weekend was undoubtedly PSG’s capitulation to Bastia. The champions were leading comfortably 2-0 after twenty minutes, only for the Islanders to come back to win 4-2. The goal of the game came from Palmeiri whose dipping volley found the net from 25 yards after a corner was partially cleared. This result meant PSG ended the weekend in fourth place in the table, Bastia’s revival continues.

After they overcame their initial stuttering start, Lyon have been in stunning form so far this season they rose to the top on the back of some great performances and football. They kept their good record at home to Toulouse with a thumping three nil win. While the attacking section of the team set about their business with their customary style the defence kept Toulouse out ensuring a clean sheet for Hubert Fournier’s men.

Lille welcomed bottom side Caen to the Stade Pierre Mauroy three days after finally playing their delayed fixture against Evian.  The scoreline would be exactly the same on both occasions, 1-0 to Lille. Goalshy they might be but they do not concede many and this is in large part down to Simon Kjaer and the lille defence. This was encapsulated by his reflex block whilst on the floor to stop a long range shot.

In their last Ligue 1 outing Bordeaux suffered a 5-0 shellacking at home to new leaders Lyon. As such, keeping a clean sheet at Monaco could be seen as result in itself. However, in a game that didn’t have all that much about it both sides will come away disappointed that they couldn’t make the difference. Contento saved his side with a diving header to clear the ball of the line in the first half.

Before Christmas, Metz went to Nantes to play the Canaris in the Coupe de la Ligue and having led 2-0 after an hour they would lose 4-2 after extra time. This time around, there would be no such entertainment. Nantes dominated the chances and the possession yet they did not have a shot on target. N’Daw came up against his former side and was effective in holding midfield, a good point for Metz away from home where they have struggled all season.

A doubly important win for Guingamp coming as it did against a direct rival for the drop in Lens. A well deserved win for Guingamp who continued their pre Christmas break upturn in form. Lens’ performance was simply too error strewn to have any hope of taking anything from the game.

Saint Etienne went to Reims boasting the best defence in the league and they left having climbed above PSG into the third. A lively game with many chances for both sides finished with Saint Etienne taking the points thanks to two strikes from outside the box. Hamouma’s curling finish doubled the away side’s lead just after half time.

Nice said goodbye to former talisman Dario Cvitanich who left for Mexico this week, they are also waiting to see their new signing Hatem Ben Arfa’s transfer to be fully ratified. In the meantime, they dispatched Lorient 3-1 on Saturday night. Brazillian midfielder Eduardo smashed home the third with a terrific volley after setting up Bosetti for Nice’s second goal.

Montpellier kicked off Ligue 1 in 2015 with an impressive win over Marseille in their first game back at the Mosson since October. Midfielder Lasne helped himself to a his first goal for the club after setting up the home side’s opener. Marseille’s second defeat of the season to Montpellier mean they drop to second in the table.

Another Lyon win another two goals for Alexandre Lacazette. His first goal was a thumping near post strike after fifteen minutes; the second a strike from a similar range to beat the Toulouse keeper. These two goals take Lacazette to nineteen goals for the season, he is simply in sublime form at the moment and he has taken Lyon to the top of the table after being seventieth after four games.

Claude Makélélé to return to PSG?